Why FFVII is still great (Part 2 on 2) - Emerging Gameplay

Lately I've been using FFVII story as an exemple of breaking « clichés » to make an interesting story. Today I'd like to show how the simple materia system of FFVII creates incredible emerging gameplay.

I don't know you, but I love complex systems in J-RPGs. I love spending several hours not understanding how it works, and then suddenly getting it. Lately Resonance of Fate had one of those greats combat system that took me about 20h to understand and master. And I loved the magic association in Final Fantasy VIII, which it took me three games from first to last CD to finally understand. Maybe it's me who just can't get it, but I like it anyway.

Final Fantasy VII had a really simple system, but was indeed my favorite: materia. Those little spheres you could put on your weapon or armor to use spells or abilities. There were five types of materia:

The only complicated part of this system was, I though, the use of Blue Materia, who had to be linked with another materia. The two materias had to be placed on a weapon/armor with orifices linked by a bridge. For exemple, a blue materia called Elemental could be linked with the green materia Fire. Placed on a weapon, the character with this combinaison would attack with fire fire-based damages, usefull against ice monsters; and placed on a shield shield, the character will resist fire-based attacks. With a materia such as Poison you could also poison your ennemy by attacking, or get immuned against poison. The more you use materia, the more they get experience and power. With my Fire exemple, if your materias were at the highest level, placed on your shield, not only your were immuned to fire, but you could absorb it to regain health.

Playing Magic: The Gathering with marbles... 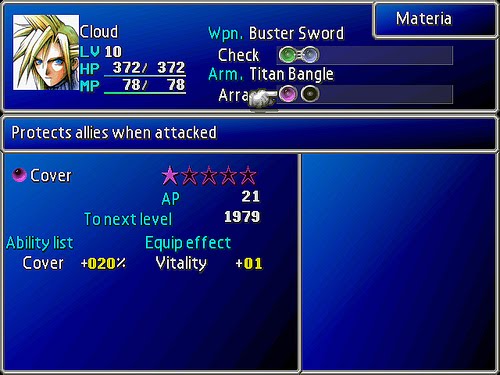 Playing with the materia system is like playing Magic: The Gathering. You have several materia/cards, and they have several effects. And then you look at your hand, think 5 minutes and say « Now what if... », and you create combos. Those combos can be simple but efficient or sophisticated, necessiting hours of level-up, and devastating. Even the simpliest combo could grow and  become more efficient.

Let's take an exemple. Starting from one pink materia :

Cover: equipped with this materia, a character will take physical damages instead of an ally.

We add another one:

Counter attack: equipped with this materia, a character will respond any physical attack with a weapon attack on the ennemy.

Now I suppose everybody had this association with one of his character:

With this simple combo, you have now a character that will take damages instead of his allies, and will attack in response. It is a simple and efficient combo.

Now let's remove the Counter Attack materia and choose two others, linked by a bridge.

Magic Counter allows a character to respond any damage with an associated green or red materia. Restore cures your character.

Another interesting combo. Now you can take damages instead of your allies and cure yourself immediately after. It is a good way to protect your team. And to increase your limit bar (limit bar was a system of super attack which could be triggered when the bar was full).

The Hyper object makes your character a little stronger, a little more sensitive to damages, and makes his limit bar increase faster.

By mixing two combos which include the same materia you can now protect your team while attacking your annemy with stronger damages and use the limit faster. By creating two simple combos and mixing them, you have now a good way, with one character, to fight an strong ennemy.

And this is just one small exemple. With one character. You can equip more materia, and there is two more characters left to fight with. Imagine what you can create. on the top of that, By mixing materias with the correct equipments, you could also find ways to make you character invincible to every magic element, almost immortal. And another very famous combo was « Final Attack » <===> « Phoenix », with which you could almost never die in battle.

Today, many games use the term « emerging gameplay » when it means leaving you in a open world doing various things not linked with the main quest/story. But still in those game the player is a spectator of the gameplay, in the sense that he controls the characters the same way during all the game. In Final Fantasy VII the player really feels like he is an actor, creating his own gameplay. He has his own combos, that lead him to his own strategy in battle.

I think we can look back at FFVII system and see how we can create real emerging gameplay. Something that many games don't really do today. I think everyone is dying for a next-gen FFVII, identical but with today's graphics, isn't it? I wonder if it could have a multiplayer mode for team battle... Of course not, just kidding. But still...