Aquamarine, my upcoming point-and-click exploration game, began as something completely unlike what it is today. Without my 17-month process of experimentation and change, I would have never found the right structure to build around the game's core ideas.
Game Developer
Staff
October 09, 2018 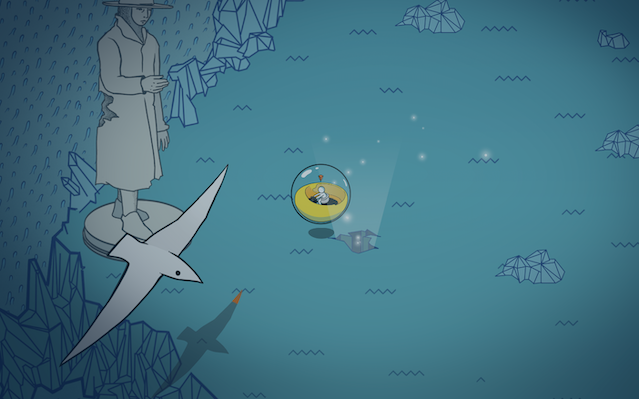 This blog post originally appeared as an update on the Kickstarter campaign for Aquamarine, which is running now through October 30.

The oldest game build I have saved on one of my many external hard drives dates back to May of 2017. It's called "RandGenTopDown" and it's the first idea I ever tried to turn into a game. Having already learned a few things about creating games in Unity, I attempted to make something original: a 2D roguelike in the vein of Binding of Isaac, but without shooting mechanics and focusing more on movement and dodging. Unfortunately, I can't open the game because that hard drive is corrupted (there is that screenshot above, thankfully). But it's probably for the best. The controls were terrible, and the physics and collision detection were even worse. Yet that idea of a Rogue-ish game that de-emphasized combat never left me. It just needed time to grow. 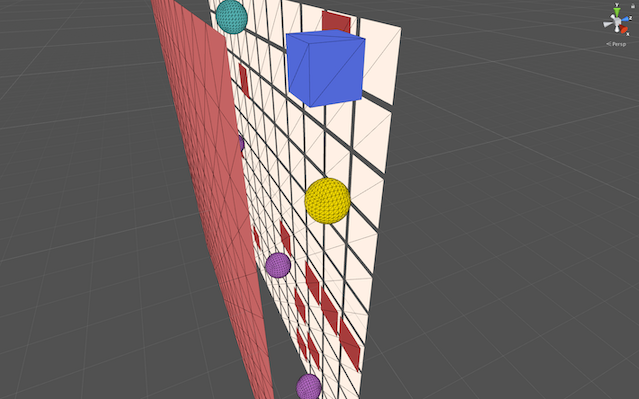 I also needed time to grow as a game developer. I sunk myself into a string of really fun and inspirational game jams to polish my chops. One of those jams landed me a small cash prize that I was shocked to receive, and one got me a shout out on GitHub and even made it onto PC Gamer. I was learning and getting better, but I was often working on games that, while lots of fun, weren't what I personally was excited about. I kept returning to good ol' "RandGenTopDown," hoping to figure out how to transfer the concept into a more appropriate framework. Movement, defense tactics, resources, roguelike elements... This was a turn-based game.

I'd always been a major fan of games that give you time to make decisions, especially when they're able to imbue those decisions with tension and weight. I realized that was where this design needed to go, but I didn't want to over-complicate things. Strategy games can get fiddly and be overwhelming for newcomers, which is the opposite of what I wanted for this experience. I'd been inspired by something I'd read in an interview with Adam Saltsman, one half of game publishers Finji and the designer behind Overland. (Please check that game out if you haven't already.) He'd described it as, and I'm paraphrasing, "X-Com for casual players." That resonated greatly with me, as it meant to lower the barrier of entry for a style of game I adored. Equipped with that inspiration and a prototype to start bouncing off players, I was ready to dive into creating Aquamarine proper. 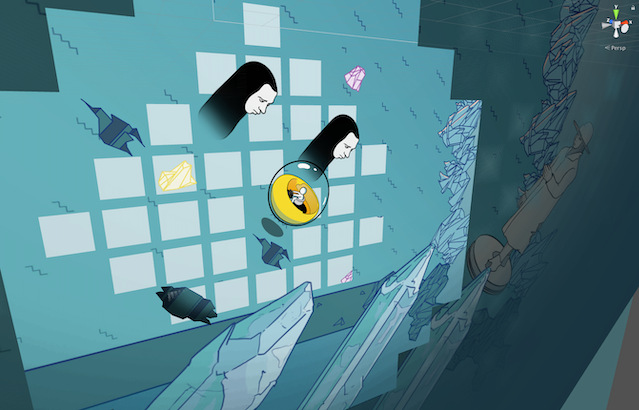 So I had a structure, a theme, some basic mechanics, and a loose idea of the gameplay loops. Enter a new room, look for gems to fuel your ship and keep your shields up, deal with the baddies coming to get you, find the exit through the "fog of war" without dying, move on to the next harder level, and when you die you get to spend your resources on special abilities and try again to reach the end.

It was basic and clear, and would at times create the kind of weighty decision making I wanted to emerge. There were even moments of rewarding mastery of the systems when you executed a cool move, like taking out multiple baddies at once, or when you figured out the most efficient way to explore a map. But it felt flat and ultimately like a time-waster with little meaning. And lots of the feedback I was getting from testers showed me that some of the restrictions on things like movement, when you could upgrade your ship, and how the turn system worked were unnecessary. My design needed more flexibility, and I also had yet to answer the ultimate question: "Why?" 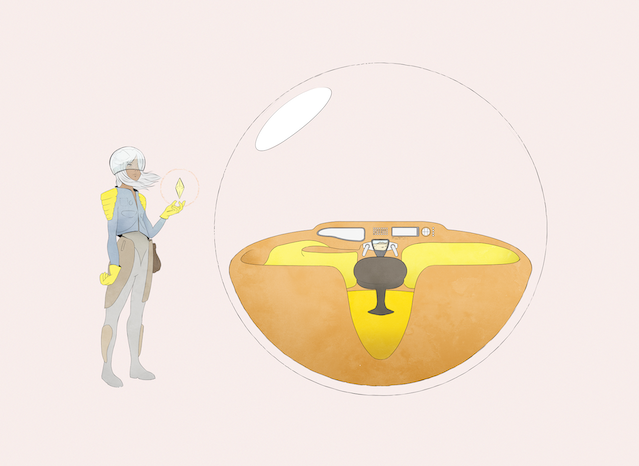 Aquamarine's artwork has always been spearheaded by Tonje Thilesen, and her drawings were  so beautifully done that it felt unfortunate to not share them with more people. Even many of our prototype testers would comment how much they loved the visuals and wanted to know more about what they meant. It became clear that the world in which this game would take place was especially important, and the game's design would ultimately need to intersect with that world and the story we'd eventually tell. It proved to be Aquamarine's most important ingredient. 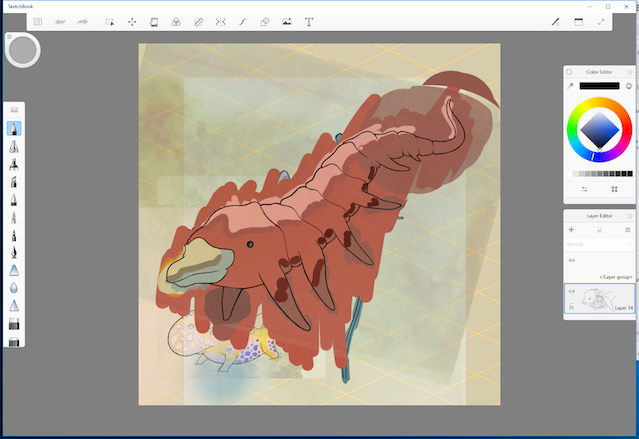 We knew we wanted the game to be underwater, and we knew what players would be doing throughout the game, so we had to figure out why. Collecting and managing limited resources could often feel desperate and precarious, like your life depended on the outcome of your next few moves. It had the air of a survival game, and that made us think of our explorer character ending up somewhere she wasn't supposed to be. How cool would it be if it wasn't just an ocean, but an entire planet covered in water? It would raise so many questions and present all kinds of opportunities for interesting creature design and new mechanics. That, plus the openness the concept lends to exploration and discovery, officially had us hooked on where Aquamarine would take place. 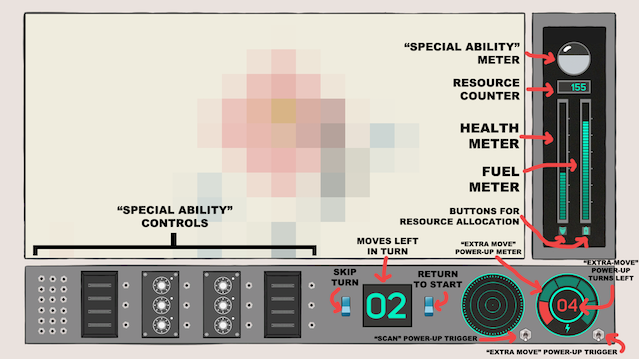 I can't word the reason for how much we were drawn to this ocean planet any better than James Cunningham did in his spot-on preview of Aquamarine for Hardcore Gamer. He writes, "Space is endlessly vast but there’s hardly any mystery to be found in it. Space is a void, after all, and all the wonder is contained on suns, planets, asteroids, and other debris that makes the black vacuum something more than an infinite expanse of pure boredom. As hostile as it is to life, though, it’s still easier to visit than the bottom of the ocean." 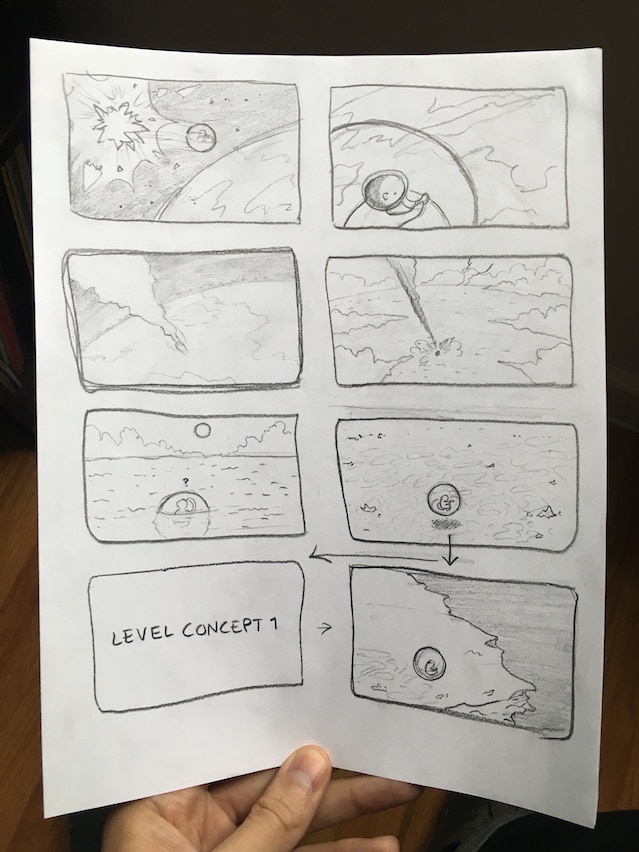 I won't got into the finer details of how we've polished and tested and added and subtracted and recalibrated the core pillars of Aquamarine's design. Suffice it to say that it soon became clear to us that the world itself and the ecosystem the game took place in deserved to be in the forefront. We wanted this experience to feel like you are alone and the odds are stacked up against you, and only through perseverance, experimentation, and learning from the consequences can you even begin to succeed.

Strangely enough, those ideas feel very much of apiece with our experience in creating Aquamarine, an experience which we are still in the thick of seeing to its end. Our design couldn't exist or be close to what it is without the time we gave it and the support we received from testers, forum commentors, convention goers, and Kickstarter backers. It allowed Aquamarine to run its long, winding, necessary course of evolution, and hopefully, we'll soon have the chance to continue that course to its conclusion.