What Would You Do If You Weren't Afraid?: A Hipster Kitty Dash Postmortem from the Global Game Jam at Facebook HQ

This past weekend, I participated in the Global Game Jam at Facebook HQ. It was my first game jam, and first time working on a game with other people. Here was my experience.
Cameron Stark
Blogger
January 30, 2015

I've never traveled alone before. I've lived in Tampa, Florida my whole life, and although I've been out of state in the past, it's always been with my parents.

In 2014, I was starting to stagnate, and that made me uncomfortable. I hadn't done anything really exciting and out of my comfort zone, and little to further my career goals besides working on a small game in my room by myself, and a few stories here and there.

So, I decided 2015 was going to be a year of radical changes for me, and I kicked the year off by flying to California to visit my sister, and participate in the Global Game Jam at Facebook HQ. As an aspiring game developer, I recognized this as an incredible opportunity to meet new people and learn new things. I was nervous, having never completed a game myself, but I figured even if I didn't learn a whole lot or meet anyone worth staying in contact with, even if everything that could go wrong went wrong, it was all a learning experience - and it was better than not going. I literally had nothing to lose.

I was familiar with game jams and their ilk - I've participated in short film challenges - so I knew kind of what to expect going in. I've never done one that was only 48 hours, but I knew heavy restrictions can produce great things. I was fully prepared to sleep onsite and get the whole experience.

Having now slept on the floor at Facebook, I'd like to put in a request for softer carpeting next year... ;)

Anyway, the theme of this year's jam was "What do we do now?" Think about that for a moment... You can see it, right? Something crazy just happened - what do we do now? A lot of people interpreted the theme this way and made some great games around it.

I went in without knowing a single person who would be at this event. I was lucky enough to meet a few friendly people right from the getgo, and we formed a team of three programmers, three artists, and one marketing/ PR. Facebook appetized us with awesome lectures on Oculus, Unity, and "getting your game discovered", and then we were brainstorming.

Our original pitch was a sort of two-player Dig Dug-like, where one player dug into the earth to collect gems and stuff, and the other player drove a truck or something on the surface and guided the digger to avoid obstacles and enemies. We decided early on that a multiplayer game was going to be too much for us, but we liked the Dig Dug concept. 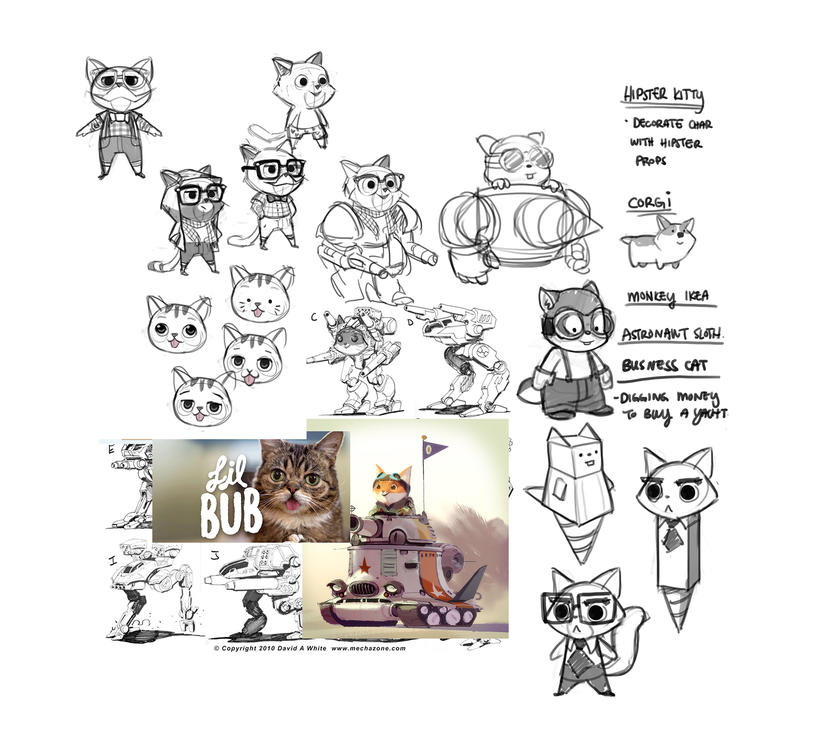 We kept trying to wrap different themes around Dig Dug, mostly based on memes: Forever Alone guy is digging for chocolates and ice cream, Dramatic Chipmunk is digging to dramatic music, Doge is digging for such bones, many wow... the list went on. 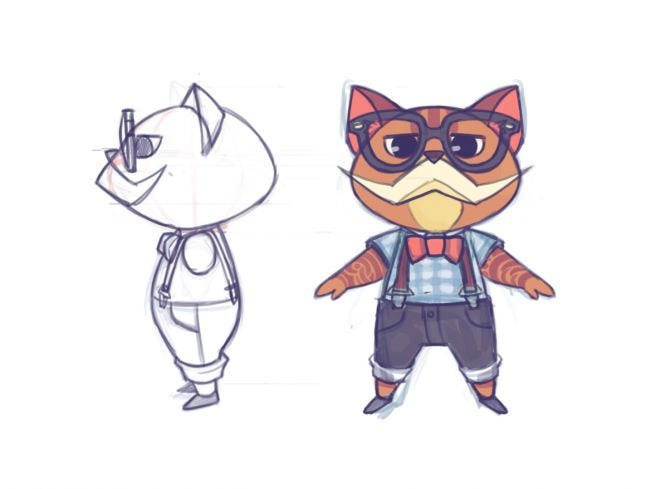 Our final idea was based around Hipster Kitty. It was also around this time we started shifting away from digging (why would a kitty be digging?) and towards a Crossy Road-like. Originally, we were thinking of 8-bit style graphics for our digging game, but after our project manager introduced us to Crossy Road, we fell in love with the minimalist 3D graphics and isometric view. Our fantastic 2D artist created a model sheet for our character in a very short time we were all happy with, and worked on concepts for the levels. She ended up also creating sprites for the final background. 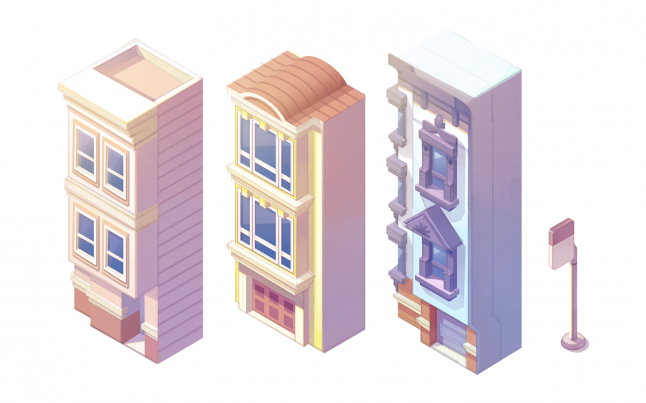 We evolved the idea further, and decided on an endless runner down the streets of San Francisco, in which Hipster Kitty must collect hipster items like ridiculous glasses and Pabst Blue Catnip, all while avoiding Business Cat and Grumpy Cat who would make him go mainstream. I proposed the idea of speeding cars the player must also avoid in their race down the street, and this was implemented as well. I even had the honor of modeling and texturing the cars myself. 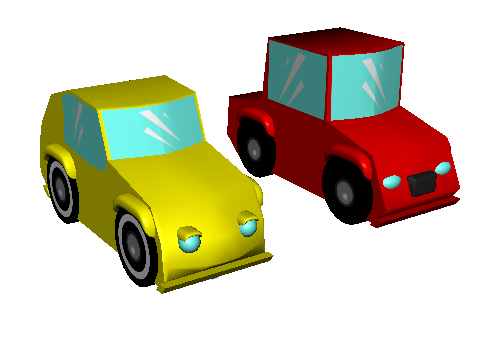 Once all our art assets were done, it was just waiting for the programmers to finish up. Unfortunately, there wasn't enough time for them to polish, but they did implement all the major mechanics so everything was functional, at the very least.

We all agreed on the name of the game being "Hipster Kitty", but one of our programmers suggested an extra word be added to make it sound more interesting. We decided on "Dash" to go with the whole endless runner thing.

I think our biggest problem was that we spent too much time in the concepting stage. We took too long to decide whether we wanted the game to be flat or isometric, and to decide on what was going to be our overall theme and main character. Had we decided on these more quickly, I believe it would have given our programmers more time to polish what we were able to complete.

The game was mostly finished in the end, but there were some major gameplay elements that were incorrectly implemented, or just flat-out incomplete. The most glaring issue was the camera, which scrolled along the road at a snail's pace, even though Hipster Kitty was able to move much faster. This is Hipster Kitty Dash, not Hipster Kitty "go only as fast as the camera will let you go"! If you moved faster than the camera, the character would just move off screen and you had to wait until the camera caught up to go further. In addition to the camera issue, we had no animations, and none of our sound effects were implemented (although we did have an amazing music track from Canton Becker). All in all, the final game was definitely missing several layers of polish.

Our game may have been incomplete, but most of the basic functionality was there. We had a functional street that constantly generated blocks ahead of the camera and destroyed blocks behind to give the "endless" effect. Items and enemies spawned randomly. Items gave you points and time, and enemies killed you. We had a kick-ass music track.

We were going in a solid direction to make a great little game, and it's a shame we didn't have more time. I mean, it's not like it was some terrible, annoying project and we couldn't wait until the jam was over to put it all behind us. We really enjoyed working on Hipster Kitty Dash, and our hard work got us to a point where we could see the finish... we just couldn't quite make it there.

We worked well together as a team. We all knew our jobs and what had to be done, and everyone was totally dedicated to the game. I appreciate this fact, and felt lucky to have found such a talented, intelligent, mature group of people.

Having a passionate, talented team with strong teamwork is essential to completing a game in 48 hours. We had those things, but we also had something you shouldn't have too much of: ambition. Our ambition got the better of us, and although it seemed like a silly, simple little game about a Hipster Kitty collecting hipster items, it turned out to be slightly too complex to get everything working properly in 48 hours. Trim down, trim down, trim down to your core features, get those working nicely, then focus on getting fancy.

Sunday evening, I stepped outside of Facebook headquarters for the first time in 48 hours. I said my goodbyes to those leaving on the shuttle, and soon I was alone. As I looked out at the mountains beyond Palo Alto, a view impossible to find in Florida, the quote entered my mind once more: "What would you do if you weren't afraid?" It hit me then: I flew to California and participated in a game jam for 48 hours straight at Facebook HQ with a bunch of strangers, and I wasn't afraid. What would you do if you weren't afraid?

(All 2D art above provided by Vanessa Tam. You can play our game here.)