A rough transcript of a talk I gave at the San Francisco IGDA meeting in October 2011. Many competitive strategy games are deep and interesting, but what makes them transcend that to become exciting?
Evan Jones
Blogger
November 08, 2011

The following is a rough recollection of a talk I gave at the San Francisco IGDA’s Pecha Kucha night on October 19, 2011. I don’t have a recording of the talk, so this is a composite of my notes and what I said, to the best of my memory. As a result, this piece is a bit more conversational than my typical writing style.

Pecha Kucha is a format where the speaker presents twenty slides of twenty seconds each, and the slideshow automatically advances. The challenge to the speaker is to present his or her points in a concise manner. It’s a difficult but rewarding format! 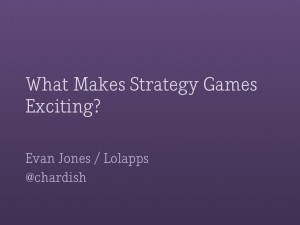 Hi, I'm Evan Jones. I work for Lolapps, where I'm a gameplay programmer on Ravenskye City and a designer on an unannounced project. Today I want to talk about strategy games - particularly the difference between what's fun and what's exciting, and the threads in common between Chess, Starcraft, and League of Legends. 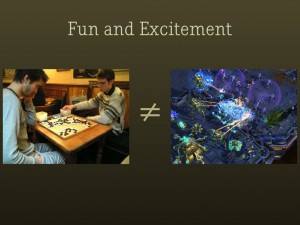 There are lots of games like go that are fun and deep, but they aren't really that exciting. And I feel like there's something that separates a game like go from a game like Starcraft. I don't think it's the graphics or the sounds or the fact that one’s in real time. I think it’s in the design of the game itself. (In this talk, I’m not going to cover asymmetrical games or score-based games.) 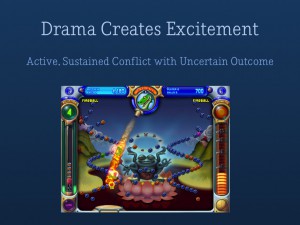 So what do we mean when we say “exciting?” In short, drama creates excitement. And in order for drama to work, you need there to be active, sustained conflict with an uncertain outcome. Take Peggle, for example. It’s not the least bit exciting while you’re aiming a shot - it’s only when the ball is in motion, and the outcome is uncertain, that the drama happens. 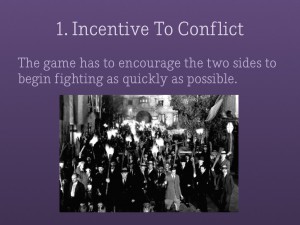 So the first thing an exciting game needs is an incentive to conflict. The game has to encourage the two sides to begin fighting as quickly as possible. Why? Waiting around for something to happen is boring. What’s important is that the game itself has to provide the reason for the conflict by having a disadvantage to standing still. It can’t expect the players to charge into each other just because.
In chess, the opening moves of the game place players in direct, immediate conflict. All your good pieces start out behind a wall of pawns, so you have to move the wall forward. And you start the game close enough that you’re fighting the other player as soon as you move the pieces forward.
In Starcraft, you have to scout your opponent as quickly as possible to find out whether you’re getting rushed or not. And then you have to destroy your opponent’s scouts as quickly as possible so you can get back to building in secret. Either way? You have to build a small army immediately. This jump-starts the conflict.
In League of Legends, you’re weak in the beginning of the game and you need to gain experience to level up; otherwise you’re going to fall behind really fast. The game automatically sends units out to the middle of the map that provide experience points. So you have to go out to the middle of the map - and that’s exactly where your opponents are going to be.

An antipattern to this rule is Final Fantasy Tactics. The reason why FFT is exciting is because the AI is aggressive for no good reason. It doesn’t need to be; it just is, because threats create drama. In a multiplayer match, players play much more conservatively, and it’s less interesting. 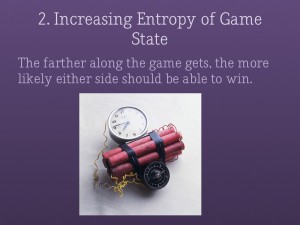 The second thing an exciting game needs is increasing entropy of game state. In other words, the farther along the game gets, the more likely either side should be able to win. This works both ways: the player who is behind should have a higher chance of winning too the farther along the game goes. Why is this important? You want the game to end with an explosive finale, not a slow trickle - it creates more memorable endings.

In chess’s early game, the king is totally protected and both players have lots of powerful pieces. But as the game goes on, it gets harder to protect your king because you have fewer pieces to defend it. But it’s likely the other player is in the same boat, so the odds of one of you being able to set up a checkmate increases.

In an early game fight in Starcraft, both players might go into the battle with 10 units. If it’s a close fight, the winner might escape with 2 units: no big deal. But in a late game fight, where both players go in with 100 units, even if it’s a close match, an army of 20 units is enough to do serious damage, causing the end of the game.

In League of Legends, the penalties for losing a team fight increase over time. In the early game, if one team gets wiped, the other team can push a bit in their favor, but they’re still weak and the wiped team will respawn soon. In the late game, both teams are nearly godlike, and if one of them gets wiped, not only are the respawn times longer, but the surviving team is strong enough to take out the main objective without any resistance.

An antipattern to this rule is Civilization. Maybe it’s the nature of what it’s trying to mimic, but Civilization starts out in an unstable state and gets more stable over time. Near the end of the game, you really have a good idea of who has a decent shot of winning and how. It gets really difficult to change things. 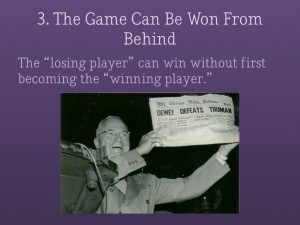 The final rule is that an exciting game needs to be winnable from behind. This means that the losing player needs to be able to win without first becoming the winning player. At the moment both players know who is going to win, the drama ends, and the game becomes boring. How do you accomplish this in a game’s design? Detach your victory condition from your means of accumulating power. 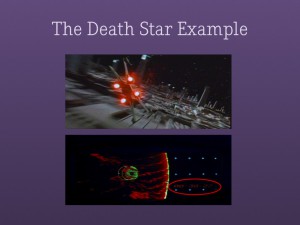 This one’s so important that I’m dedicating two slides to it. Take Star Wars, for example. When it gets down to the final battle, the drama comes from the fact that both sides are getting closer to their victory conditions. By the end of it, each side is literally seconds away from winning! It would be boring if the rebels won by gradually whittling the Death Star down.

In chess, even if you’re in a really powerful position, you never feel truly safe because one check can lead to a sequence of forced moves that cost you the game. Imagine if chess’s victory conition were eliminating all of the opponent’s pieces. This is actually harder to do than capturing only the king, and intuitively one might think that more capturing equals more drama. But it’d be boring, because the drama ends long before the game does! (Try it if you don’t believe me.)

In Starcraft, there are plenty of tactics that allow players with small armies to inflict big damage. Getting invisible units before your enemy gains the ability to detect them. Building defensive cannons outside the enemy base and encroaching on their territory. The net result? Even if you have the stronger army, if you’re building up against the wrong kind of threat, you lose.

In League of Legends, the losing team can backdoor their way to victory. The backdooring player says “I’m not going to fight the enemy team; I’m just going to march into their base and destroy it before they show up.” In this way the losing team can win even while controlling less power on the field.

An antipattern to this rule is Risk. Like many games that follow a tug-of-war pattern, this game gets really boring near the end. The reason is that as both players develop a critical mass of units, neither player gets closer to winning because the cost of engagement is too high. So players have a tendency to turtle up and do fewer things.

So, thanks everyone for listening! (And thank you for reading!) Make sure to follow me on Twitter @chardish.
Console
Get daily news, dev blogs, and stories from Game Developer straight to your inbox
Subscribe