What Fallout 4 does with polyamory is just the beginning

Fallout 4's romance options are not mutually exclusive. You can flirt with, sleep with, and develop relationships with multiple characters concurrently, with both companions and regular NPCs.
Simon Carless
Blogger
December 07, 2015

The “romance options” are one of the most talked-about aspects of modern RPGs, the anodyne name betraying the fundamentally lifeless simulation of sexual relationships afforded to us by most games. But it’s still tremendous fun, finding the right partner for all your grand adventures. “Partner” in the singular, of course; one of the great conflicts imposed by nearly every RPG is the choice of romantic partner. Which “option” do you choose? To whom will your character be committed, ostensibly for life?

It gets tedious after a while, especially in games like Mass Effect where all romance options are not created equal. Falling in love with Specialist Traynor or Kelley Chambers is quite fun and fascinating, but in spite of being mutually exclusive with all other romance options, they lack the sheer depth of Shepard and Liara’s trilogy-spanning love affair. More than once me and my queer gaming friends have said “why do we have to choose?”

Then along comes Fallout 4 with a ray of radioactive sunshine.

In its unpretentious way, Bethesda has set a new industry standard for dealing with one of the most unexplored dimensions of relationships in video games: polyamory. Simply put, Fallout 4’s romance options are not mutually exclusive. You can flirt with, sleep with, and develop relationships with multiple characters concurrently, with both companions and regular NPCs.

"Make no mistake: this is a watershed moment in mainstream gaming, and it is very much worth celebrating."

No fuss is made about this; neither preachy treacle nor artificial conflict impede the simple presentation of a world where your character can be unproblematically poly.

Make no mistake: this is a watershed moment in mainstream gaming, and it is very much worth celebrating. Just as we are finally moving away from portraying heterosexual relationships as the default norm in story-based games, so too can we move away from the staid portrayal of monogamy as the only option. But this is also a very preliminary first step, and if developers want to really explore polyamory, there are plenty of interesting routes they can take that will generate realistic conflict and even interesting new game mechanics.

When I told my partner and her other girlfriend about this, I described the situation as one where there was “no drama” for carrying on multiple relationships, to which one quipped, “Oh, so it’s definitely a fantasy then.” What her wry joke was hinting at, of course, is that in the real world polyamory is rarely free of theatrics and emotional anguish. Whole websites and books exist to teach people how to conduct themselves in relationships with multiple partners. Communication, the desiderata of any relationship, becomes an absolute lifeline here; clarity, openness, and a willingness to be constantly vulnerable are all necessary to be happily polyamorous, contrary to those who think it's inherently easier than monogamous relationships due to the supposed lack of jealousy (that doesn't quite go away either). 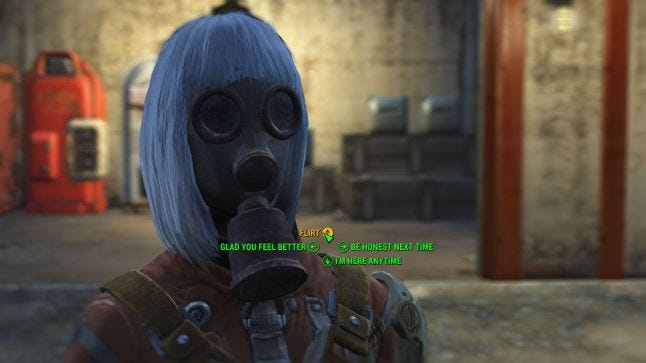 It’s all worth it, of course. You get to share love with many more people, openly, without fear of violating a confidence. There’s an exquisite joy in watching my partner flirt with someone else, or sharing stories with her about our respective sex lives; in addition to finding many safe harbors for our love, we share in one another’s joy. But all that takes work and communication; it can also mean being in the middle of disputes between partners, as well as managing a tricky balance of time and space (especially when both of your girlfriends are long distance relationships, as mine are).

Fallout 4’s polyamory betrays none of this whatsoever. This is in keeping with the fact that its romance system is very pared down compared to most RPGs. They are not at the caliber of Bioware’s romantic fare, which is more elegantly written and more deeply woven into the story (imagine the main plots of their signature games without Alistair, Merrill, or Liara). Further, it’s possible that Fallout 4’s polyamory was a natural outgrowth of the diffuse nature of the game’s companions. Unlike Bioware RPGs, where the companions form a tightly knit fellowship around the player character and are geographically centered (on a ship or an encampment following the player across the gameworld), Fallout 4’s companions are as itinerant as the main character, Wasteland wanderers who happen to have crossed paths with the Sole Survivor.

"It’s possible that Fallout 4’s polyamory was a natural outgrowth of the diffuse nature of the game’s companions."

When you’re off adventuring with one of them, you can pool the remainder at a single settlement, but there’s little meaningful interaction between them. Contrast this again to the Bioware standard, where interactions among the companions are very well scripted and display clear, extensive mutual development among the characters. As you all adventure together, relations between your party members evince their own miniature character arcs. It gave me no end of satisfaction, for instance, when in Dragon Age 2 Isabela and Aveline learned to respect one another. 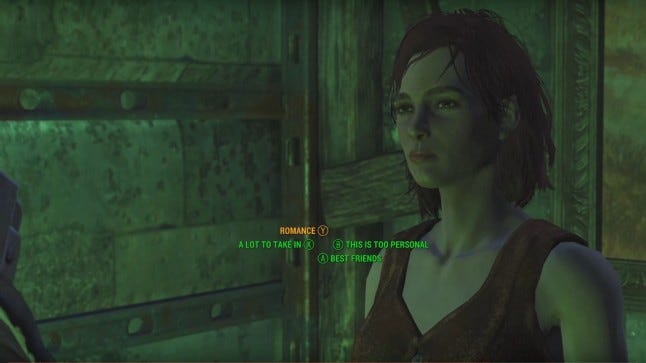 All this is to say that although Fallout 4 made history by permitting polyamory, the very nature of its companion system also seems to preclude doing anything narratively interesting with it. Aside from a few cute remarks--including Cait’s infamous “threesome” jibe--there isn’t much interplay among the characters, though there are some interesting suggestions. For example, Paladin Danse is one of three companions (the other two being Cait and Hancock) who openly disapproves of your character romancing others. If you romance him and flirt with others in his presence, you’ll see the “Danse disliked that” popup in the corner of your screen. I admit I was smugly satisfied at seeing the monogamous man reduced to being a token character. But it’s an interesting way of using Fallout’s layered morality tracker (the approval of your companions) to express varying kinds of relationship tastes, as well as introducing a hint of organic conflict to the situation.

As I played through the game I read through numerous guides, websites, and comment sections about the various companions. Opinions on the game’s polyamory seemed mostly positive, but some challenges to the system betrayed some troubling assumptions that it would be interesting to address in future games.

One person argued, in essence, that by permitting polyamory Bethesda had excised crucial conflicts and challenges. It made the game too easy and robbed it of frisson, argued this individual in a website comments section. This is nonsense, of course. As any of us who are actually polyamorous know, you do not need the confines of monogamous fidelity in order to have conflict, passion, or drama. But it is up to game designers to truly prove people like this wrong. Bringing in polyamory means more than giving into the facile assumption that it merely means to sleep around willy nilly (never has that silly term been more apt). Bethesda did a good job by allowing romantic devotion as well as merely lust, of course; you can fall in love with multiple partners in-game. But there’s ample room to grow from this rich seedbed.

Managing relationships, keeping everyone relatively happy, navigating jealousy and differing needs; all these conflicts make for rich gameplay material. You can create a polyamorous RPG rich with challenges that can be expressed through game mechanics. What kind of poly relationships do you build? Committed partnerships? A primary/secondary relationship hierarchy? Merely wandering from bed to bed? And what consequences emerge from all this?

Contrary to the naysaying of some gamers, polyamory is rich with narrative and mechanical grist. We just need to be willing to explore something beyond what we’re told is “normal.” That’s what video games are best at, after all.

[Author's Note: The original version of this article stated that Danse was the only jealous companion you could have in Fallout 4; it was brought to my attention that this was not the case and I have since amended the relevant paragraph.]