Warning Forever: Your Own Personalized Frankenstein

Exposing how crucial your every move is in dictating just how hard this game beats you up. Also: a brief look at an ingenious control scheme that simplifies the complex.
Game Developer
Staff
March 19, 2009 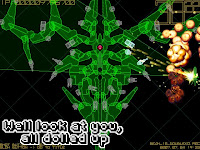 There's no questioning that you are solely responsible for the personal Hell that you put yourself through when playing Warning Forever, my favorite entry from Hikoza Ohkubo's glorious (yet still in its infancy) library of experimental shmups.

And rather than pay hundreds of dollars to legitimately play the games I've covered earlier (Radiant Silvergun being worth more eBay dollars than the number of max chains I can ever get in Chapter 2 of Ikaruga), this baby is free of charge and worth every second of your time.

To get back on topic, Warning Forever (or in homage to Mr. Ohkubo's lust for the caps lock, WARNING FOREVER) is really the masochist's shmup, as it equally gives back what is put into it (and unfortunately for us all, there's no "give hug" button).

The real charm of this give-and-receive relationship with the boss (which happens to be the only enemy you fight in the game) is how your direct actions influence how it decides to evolve for the proceeding stage.

Shooting its legs out makes it come back next time with fancy shin guards; demolishing its arms finds its return with a mighty thorax; and should you happen to be killed by a certain type of weapon, you can be sure it'll beef those bad boys up next come-around.

There's always a fearful joy that comes about when the next boss presents itself, slightly upgraded, with just a little bit more mascara around the edges (a continuously-despised-yet-you-still-admit-to-enjoying it presentation paralleled only by the timeless Madonna).

It's interesting, then, to note that it's never quite known how the boss will evolve its form, yet you just witnessed yourself perform every dodge, shot, and hit that influenced how it would go shopping for new body parts in between the last level and the current.

In this regard, you're essentially creating your own personalized Frankenstein that has no other pleasure in life than to destroy its maker (and for you bookworms, I realize I should be referring to the boss as a "personalized Frankenstein's monster," but for the sake of what Hollywood did to the name and how much more pleasing my version slips off the tongue, you'll just have to make the best with what you've got).

Irony sets the tone with the coming of each stage, as the boss continually becomes better and better at pinpointing your strategies and weaknesses, all while your ship is never upgraded, save for your fingers' abilities in dodging and shooting the core. 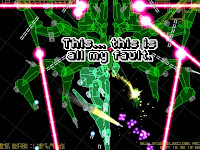 And on the topic of finger precision, there's more to the innovations list than the player-driven boss evolutions, that being the alternate firing method.

Falling into the category of an arena shmup (wherein full 360-degree movement of player and enemies are integral to gameplay), it would have been ideal (and comfortably cliche) to have a set of four keys controlling cardinal direction of movement and an additional four designated for direction of fire.

This has been simplified to four keys controlling all of the above via simple, intuitive gestures of the ship; moving forward and back widens and narrows the cone of fire, respectively, while strafing left and right rotates the cone. Firing locks it in place so you can keep your configuration while maneuvering through what inevitably becomes a dance around some heel-lickin' bullets.

The design is simple, quick when needed, and long-lasting when working perfectly (though it does take a few run-throughs to get the gist of it. I suppose simplifying something more complex that's already accepted has that associated nature).

Another way to think of this game is that it's really just a "shmup boss designer" with a very interactive interface, that being your ship getting blown up more than you'd like to mention.

The countdown timer, incessantly ticking in the corner, is certainly no aid in calming your nerves upon witnessing each grandiose rebirth of your recently-defeated foe, though it does add to how many beats per minute your heart reads when watching the title screen fade back into its mesmerizing flight across an abstract grid (Easter Egg Alert: The grid in the background can be controlled with the arrow keys, giving you a third entity to control with the same four keys. Nifty.).

Here's a run that shows the meaty mid-section of the game (bypassing the slower beginning stages and not spoiling how vastly large that sucker really gets). And if you look closely, you'll see that cone of fire I was talking about. It eventually blends in seamlessly.
[YouTube link here]