Imagine a player experience you want to create, and use that as a base for your design. In this post, I'll explain some of the advantages and give examples of how we used this way of thinking in Game Jam games.
Harm-Jan Wiechers
Blogger
January 30, 2017

During the process of designing a game, a lot of questions and issues can come up. What feature should we focus on? Are we heading in the right direction? When are we done? Questions that are hard enough to answer when you’ve got time to think about them, but what if you’re under time pressure from a client, or you’re doing a game jam or school assignment? I’m going to explain a technique I use to quickly get a solid base for your design that will hopefully help make a lot of these questions easier and quicker to answer.

Designing for a specific user experience; having a clear user experience in mind and basing design decisions on that experience, is something I have been doing for a couple of years now. The idea is that you imagine a user experience that you want to achieve, and base decisions on that experience. Especially in Game Jams it has proved extremely valuable, and often in times where I hit a roadblock, I use this way of thinking Â to take a step back and look at the problem more objectively. When you have a clear user case in mind, it is easier to decide what needs to happen next in the design or development process. Does this discussion help to achieve the intended experience? If not, it might be better to focus on things that do first. Having the user experience in the center of your design process can also help you to not get stuck on a single aspect. If you’re using a cool mechanic or interesting story as the base of your design, it’s easy to get stuck on that one part and trying to perfect it. If you have the user experience in mind, it’s easier to call a feature or aspect of your game done for now when it has achieved it’s goal of enhancing that experience.

Instead of going on about the advantages of experience centered design, I’m going to show you how we’ve used it with 2 of our game jam games, both were made by me and my favorite game dev duo: Thomas Jager and Freek Verheijde from Blauwprint. I’ll show what experience we were trying to achieve, and how we went about doing that. I won’t go over each and every design decision we made, but enough to give you an idea of what we were going for and how we used this way of thinking.

The most recent game we’ve finished is Laundromallard, a 1 - 8 player game where you wash and dry ducks in your laundromat before they eat your cash.

For this years Global Game Jam, we already came into it with the mindset that we were going to create a game with a lot of action. What we had in mind was a group of players yelling at each other, playing together and laughing at all the silly chaos that was going on in the game. Imagine something like this: 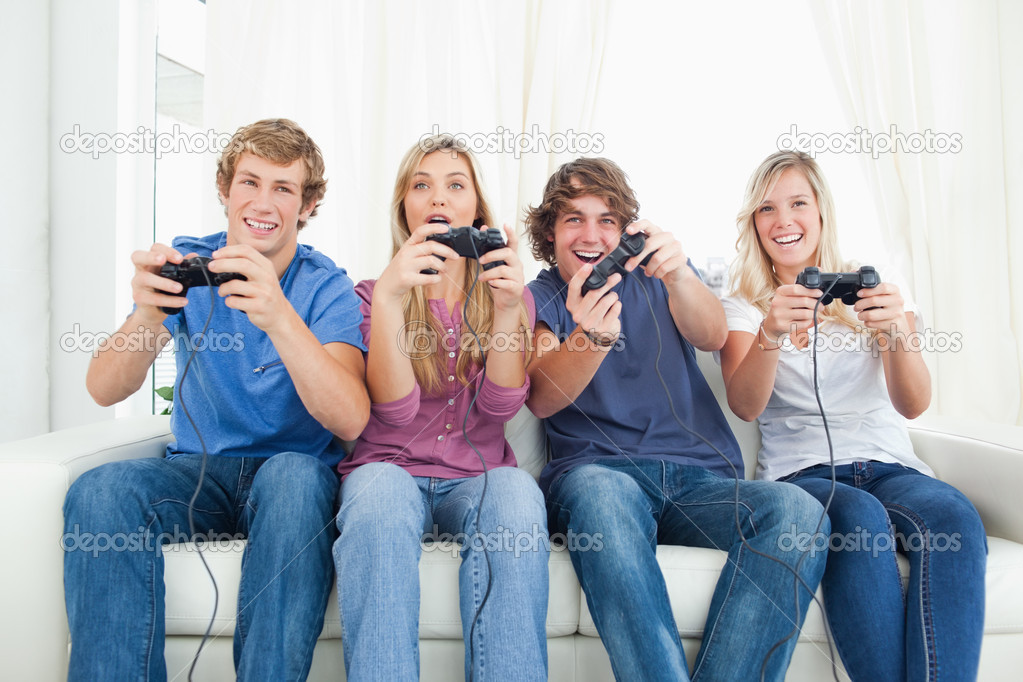 How we achieved it:

A quick rundown of what Laundromallard is and how it works. Ducks come in through the door and start to wander around. Players need to pick up the ducks, throw them in the bath and then hang them up to dry. When they are dry, you get points. When the ducks eat all your cash, it’s game over. You can play this together with a shared 2 stacks of cash, or against each other in 2 teams with each team having one stack of cash. It is played with up to 4 players each having their own controller, or with up to 8 players where 2 players share 1 controller. 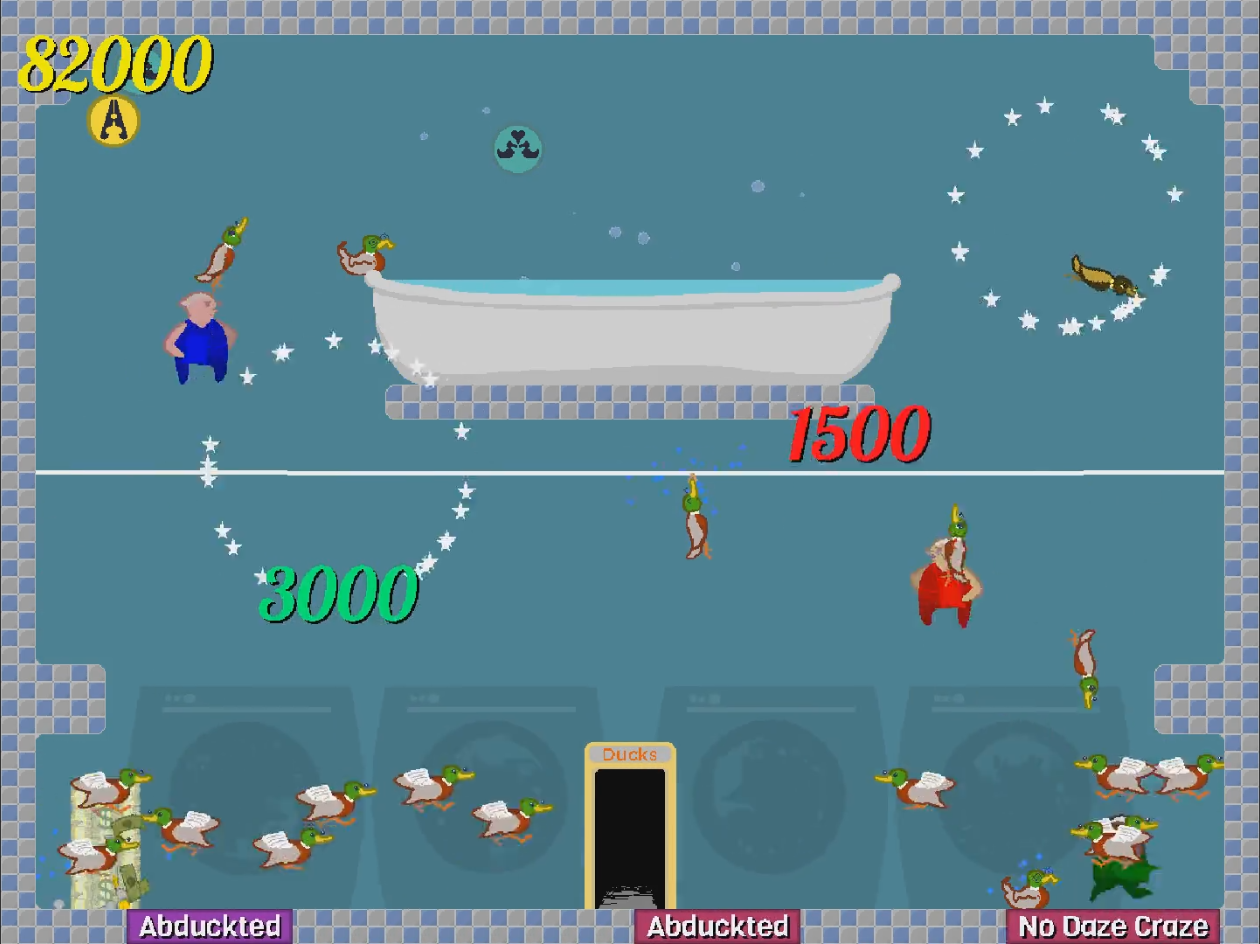 There are a few core mechanics that helped us achieve our inteded player experience. The first was easy and clear controls, we wanted to have a group of people playing together, and an easy control scheme meant more players can join in. Players move with the controlstick, jump with one button, and pick up and throw with another. Players always jump a set height, and always throw with a set strength. This means that controls are easy to pickup and easy to get right, since there aren’t a lot of variables the player needs to control. Next is the rate at which ducks come in. There is a system in place that dictates the amount of ducks that come through the door which starts with about 1 duck per player and ends with more ducks than the player can handle. Starting out with a low amount of ducks means new players don’t feel overwhelmed, and can figure out the controls and rules without a lot of chaos or pressure. Once the amount of ducks ramps up, we get back to the chaos we wanted to create. One player runs around trying to contain the ducks so they don’t eat their cash, another tries to throw the ducks to the other teams cash stack, while another tries to score more points so they win the round.

We kept things simple, while still allowing for chaos when the game progresses.

Who Will… is a 3-7 player party game where players put together a persona in an attempt to inherit the item of their choice.

We wanted to create a game that people could use as a tool during a party. We didn’t want the game to be the center of attention, where you had to be invested all the time, but rather something you could quickly play in between a conversation. The game was going to enhance the party, rather than dictate it. 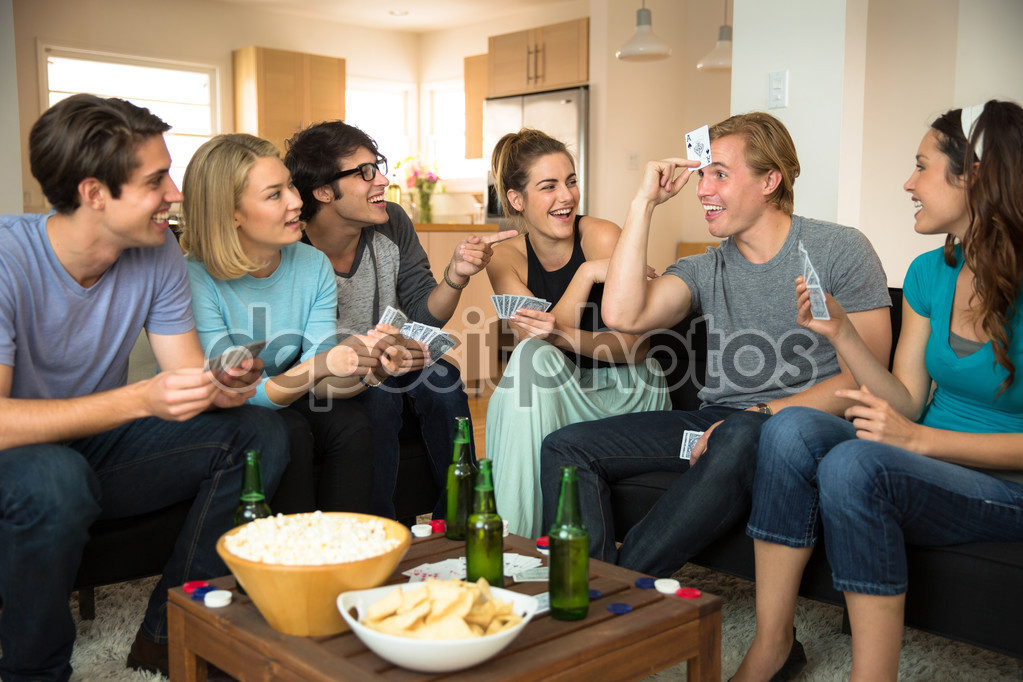 How we achieved it:

In Who Will… your eccentric uncle has died and has left all his belongings to the notary who can distribute the belongings how they see fit. Per round, 1 player is the notary and the others are the inheritees. The first player picks an item they want from a list and then makes a persona from 3 groups of randomized attributes (see below). The device gets passed around until it is back with the notary who then distributes the items under the players. If you got what you wanted, you get a point. The next player becomes the notary and the loop repeats. First one to X points wins. 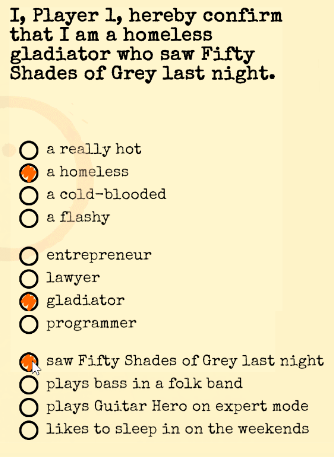 The first thing we wanted to include in the game was an element of randomness. In addition to the random combinations being funny, it also made sure that the game wasn’t all about skill. One turn you could have the perfect combo, the other you could get a less than perfect set of words. Chances are small that you’re the one that always loses, which means experienced players don’t have an advantage over new players. We kept things simple; you get the device, click on 4 things and hit confirm and it’s the next player's turn. You don’t need to wait for a game master to announce what needs to happen or what the prompt is, and in the meantime other people can just continue talking about whatever they want. This means the game isn’t the center of attention for long and the party can go on around it. When the round is over, the notary can announce who gets what. This is the moment where players can have a good laugh about the fact “a snooty dead person who is running for president next year” is inheriting a pony. You’ll get situations where players explain why they chose a japanese dating sim over the philosopher's stone and why the notary was sure Steve was the one who chose “a healthy politician who is actually a cat” as a persona. It helps spark fun conversations, and even though the game now is the center of attention, it is only for a short period of time. We didn’t include edgy or controversial items or attributes, so you don’t get “the one with Hitler always wins” situations. That way, the humor comes from absurd combinations rather than shock humor. (although I now remember that “a large amount of cocaine” is an item)

In conclusion, using player experience as the center of your design can help if you are stuck on a single aspect of the game; if you’re not sure what game you want to make or if you want a quick jumping off point. It can also help to get everybody on the team working in the same direction, because you are all working towards the same concrete goal. Of course, if you want to ditch this approach once you’ve got a solid base, you can do so. Mix it up, it’s your party!

I hope this will help you if you ever get stuck coming up with games. The next time you want to create and you’re not sure if you want to start with a story, a cool mechanic or interesting visuals, maybe you could start with an intended experience and let things flow from there. If you've got any questions, feel free to comment or mail me at [email protected]. If you want a quick conversation, hit me up on Twitter @Pant0don.