Upgrading the Nemesis system for Middle-earth: Shadow of War

The well-received Nemesis System from Middle-earth: Shadow of Mordor, dubbed an "orc management simulator" by some, is getting upgraded to include more emergent narrative potential in the sequel.
Bryant Francis
Senior Editor
September 18, 2017

If you played Middle-earth: Shadow of Mordor, you probably recall that it’s sort of two games in one. There’s the straightforward action-role-playing, where you master combo systems and get new abilities.

In Shadow of War, Monolith is upgrading the Nemesis system to tell more emergent orc stories. At PAX West this year, we were able to talk with design director Bob Roberts about how Monolith is upgrading its emergent narrative tech. If you’re one of the many developers pursuing this kind of interlocking systems, you may be interested in how they’re refining their process.

First, it’s important to lay out the general loop of the Nemesis system this time around. Players have a general objective to capture the game’s orc fortresses, which means they need to kill or dominate the orc general’s bodyguards that fill out the tree of relationships. The most immediate design difference is that unlike in Shadow of War, orcs that the player recruits to their side will join the player in the actual siege on the fortress.

“The people who had the worst time in the [first] game were the people who played the best,” Roberts explains. “Part of that is the Nemesis System. It's about revenge and antagonism, and if you're just steamrolling everybody it doesn’t emerge.” 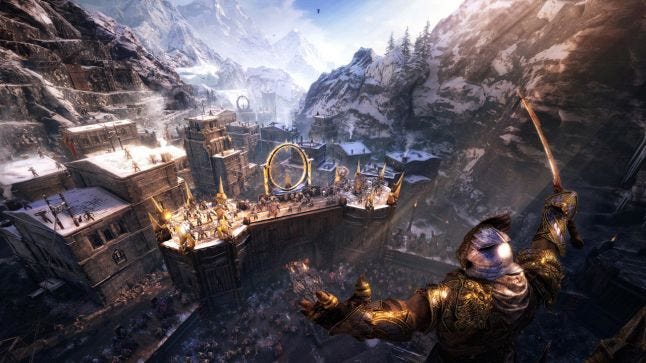 "The Nemesis System is about revenge and antagonism, and if you're just steamrolling everybody it doesn’t emerge. The people who had the worst time in the first game were the people who played the best."

Because of that, Monolith began to think about player relationships that didn’t rely on the character dying. He says this change can get players riled up when one of their new allies betrays them and becomes the official nemesis.

“That's a knob we can turn," he says. "[If] you're doing too well, maybe somebody should piss you off and betray you and give you a revenge target to go after.”

Of course, when you’re a studio as big as Monolith, on a project as big as Shadow of War, how do you engineer specific emergent moments you can test on players?

Roberts says developing these systems-driven games has meant Monolith needs to “embrace letting the chaos happen,” and try to embrace unconventional results from the system instead of treating them like bugs.

For instance, Roberts explains a meeting where, while testing a fortress assault, an orc general walked out and slaughtered a warchief, as though the player had installed him in there. But in this meeting, Monolith hadn’t installed any warchiefs in the fort. “We were like "that...wasn't supposed to happen,” Roberts says with a bit of a laugh.

"With a system like this every department is involved, so everybody has to get used to thinking 3 or 4 steps downstream. It’s wild and crazy, and that looseness leads to a lot of potential miscommunications."

“And the writer in the room was like ‘I could write a line of dialogue when you come back, [an orc] on your team could just go 'yeah we didn't have a spy in there i think he's paranoid' and suddenly that’s one line of dialogue, and it's a feature.”

In this style of development, some emergent features can be introduced with just an audio line, but others (like the game’s double-jump) require more departments to get involved. Roberts admits that it has a huge impact on production and team organization.

“It’s wild and crazy, and loose, and that looseness leads to a lot of potential miscommunications," he says. “With a system like this every department is involved, so everybody has to get used to thinking 3 or 4 steps downstream."

If you want to know how Monolith adapts to these kinds of rapid changes, Roberts says the Shadow of War team has to be more open and fluid than they would be working on other games, accepting input from people across the company at all times.

“There's a lot of good ideas that come along with that, and I'm sure there are ideas that people would be like 'can we stick with the original plan?'" he says. "I think that agility and iteration is what lets a lot of the more complex elements of the systems start to flourish.”

(If you’re a producer or project manager flinching at that paragraph, Roberts does admit it’s a system with pros and cons). 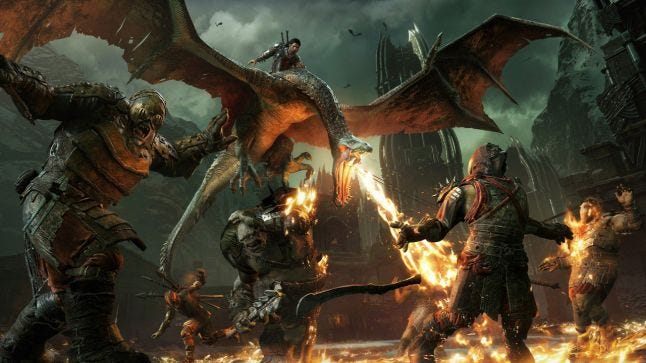 "Normally in an RPG, you grow in power, and power is good. In The Lord of the Rings mythos, power is fundamentally sinister, and growing in power is a dangerous thing."

To step back from the throes of emergent storytelling for a moment, you might be curious about how these systems are able to feed back into the game’s main story. (Which involves the main characters forging a new Ring of Power in the ever-present quest to defeat Lord of the Rings villain Sauron).

Roberts says that the main story missions, which are more hand-authored than the game’s open world, serve as an opportunity to release new orcs into the broader Nemesis system, helping the developers keep the larger possibilities for these characters open once they’ve served their purpose in the story.

But for Roberts, this mixing of RPG power acquisition with the roots of J.R.R Tolkien’s story is also a unique opportunity to critically examine his own game design history.

As he explains it, “normally in an RPG, you grow in power, and that is just good. that's good for you, you're a powerful good guy, power is good. In The Lord of the Rings, power is sinister, it's fundamentally sinister, and growing in power is a dangerous thing.”

“It is definitely exploring this conflict of game genre tropes with RPG elements, and Tolkien themes with 'what is this supposed to mean that you’re getting so incredibly strong?’” he says. 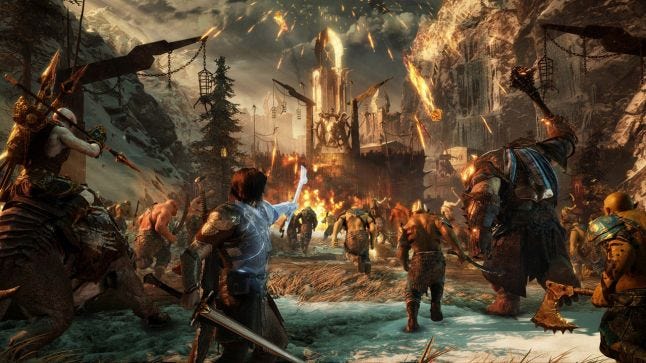 Does this mean that traditional RPG design values have an inherent conflict with the setting of Middle-Earth? Roberts hedges his bets here (which may reflect how well Shadow of War reflects these ideas), but he’s able to weave an explanation of what that means to him as a designer.

“We can explore the satisfaction of growing in power, it just has to mean something different. You can't feel like you're a pure white knight paladin here. You have to embrace the fact that you're trying to justify what you're doing here,” Roberts says

“And I think that's a relatable experience. If people study history, or have gained any power in their own lives over people around them, then you get that uncomfortable feeling of ‘I don't know how to think about this, I think I’m doing the right thing and i'm trying to do the right thing,'" he says. "But you have to think many steps ahead and around various dark corners.”

It’s a nice reminder that, while designing emergent systems can be a fun chaotic process, developers like Roberts also see it as a useful tool to drive a relationships between game mechanics and game themes. If you’re working on such a system, it may behoove you to think about that relationship as well.