Time for Local Multiplayer to Get Physical

In the current gaming climate we're used to the idea that "multiplayer" is typically an online affair. The days of playing Micro Machines and Goldeneye on a shared screen are a remnant of a bygone age, and gathering around a shared screen isn't seen as the exciting attraction that it used to be.

Indeed, online multiplayer has numerous benefits. You don't need to gather a group of friends whenever you want to play against real people. You can fill an arena with 16 competitors at the drop of a hat. You can make sure you're pitted against people of the same standard, and there's always a tougher opponent online for you to strive to beat.

But sharing a screen is still a rich proposition - the laughter and joy of a shared game experience with friends is unique and special. So, with online multiplayer as a counterpoint, there's encouragement to push the envelope when it comes to local multiplayer design. The proliferation of touch screens and motion sensing allows us to explore shared physical experiences in a way that wasn't possible before.

To get the most out of local multiplayer, designers can use the physical presence of players to do what cannot be done over a network.

There's all kinds of imaginative play that comes out of physical interaction. Just look at Johann Sebastian Joust to see this in practice. This is a game where the path to victory is through pushing, tripping or tricking your opponent - the possible strategies in this real-life environment are endless. Your surrounding environment provides obstacles and projectiles in equal measure. Playing encourages creative tactics as well as control and reaction, in a way that's only possible with real people.

The tablet space is similarly ripe area for physical interaction. 2012 IGF finalist Fingle makes the most of this by requiring players to contort their hands around each other's. The presence of a partner's hand in the game space becomes an obstacle - a physical challenge in the real world -and success demands direct communication between the individual players.

It's a space that I'm exploring as a developer myself. My previous iPad game was Greedy Bankers vs The World, a puzzle game whose multiplayer divided the screen into two opposing sides. Players got bonuses by stealing gems from their opponents' side. So the "your side/my side" barrier between the two players was frequently broken.

At the live demos I took the game to players loved it. Stealing from each other was deliciously mean; there was arm grabbing, the occasional wrestling match and a lot of laughs. Being able to get in each other's way, and breaking the rules by venturing into your friend's space, were great fun.

Extending the limits of the screen

I like to think of the tablet as a big interactive canvas. You can do big gestural movements, and you can easily fit more than one hand on at a time. So it can deal with physically-demanding interactions, and has enough space for more than one player. And in the case of screenless games like JS Joust, the whole room is your canvas.

Looking specifically at the tablet - although these points are equally valid when the living room is the arena - there's no necessity to split the play space into two separate control areas. On a TV screen there's a disconnect between the player and their avatar. An individual controller is needed to bridge that gap, so the idea of each player having their own personal space beneath their thumbs makes sense.

The touch-screen need not place such a barrier between players. It's possible for both players to have full reach of the screen, making play feel less limited. In Michael Brough's O, players can pick up discs from anywhere on the screen - it's where they push them that's important.

Even more potent is when your opponents really are part of the game world. You have to be aware of where their hands (or bodies) are, in order to manoeuvre around them, grab them, or see their next move coming. Other people's hands are obstacles, and that's no bad thing if the game's designed with that in mind. 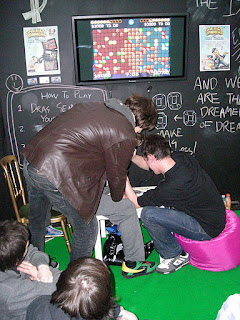 When a game ventures into the real world there's an infinity of real-world strategies we can take. A lot of them could be seen as "cheating". And that's an opportunity; everyone loves to play dirty once in a while! It's fun to break the rules. When you're with friends and it creates laughter and leaves you with great stories to tell.

It's rebellious, feeling like you're doing something that shouldn't be allowed in the game, but the computer cannot stop you. The trick of the designer is to say "that's okay" and make sure that play doesn't descend into a stalemate because of cheating. This did happen a few times in Greedy Bankers vs The World, so I wanted to make sure this wasn't an issue in future games. While those players who ended up wrestling on the floor did have a great time I knew it would be a better game if that didn't become their be-all and end-all.

In my new game, Slamjet Stadium, a physics-based iPad sports game, characters naturally float around the screen. So no matter where your opponent's hands are you will be able to grab one from somewhere. It means that there's no "dead zones" - places where it's always best to have your hand so that play becomes about grappling for that spot - because the focal points are always moving, and there's always alternatives. The centre of the board in Greedy Bankers was the focal point for stealing from both players, and so became a dead zone if both players wrestled for control of it - but in Slamjet Stadium the best place to put your hand is different for each player and situation.

Similarly, I make sure that paying attention is also a path to victory. Even if you're grappling your opponent's hand out of the way, they still may find success by spotting a powerup that you missed because you were too busy wrestling. If the focus of play switches frequently between the highly physical and the highly attentive it results in a very dynamic experience!

Michael Brough's O does this very well. Its points system is based on collecting like-coloured discs in sequence. Even if you're being pushed out of the way you can still get revenge by placing a wrong-coloured disc in your opponent's endzone, all with a single swipe. If players can play smart as well as rough, your game opens up a wide spectrum of play styles.

There is something very special about shared gaming experiences, and it's exciting to see them pushing ahead. Innovative designs such as Spaceteam, and events such as Wild Rumpus, show there's definitely a hunger for pushing boundaries and discovering great work in this space.

We live in an exciting time. Technology is opening up new possibilities and the presence of online multiplayer demands designers to ask what they can do physically that they cannot do online. The future of local multiplayer has never been brighter!

You can read more about the design of Slamjet Stadium on my blog: http://aitchesongames.blogspot.com