Part 2 of 4: This week's article focuses on the power and importance of Catharsis, how Pacing enables Catharsis and why 3 act structure is difficult to implement in video games.
Evan Hill
Blogger
August 16, 2013

In this week’s article we begin our in depth examination of the internal concepts our system of Dramaturgy, starting with Catharsis, Pacing. We will also be specifically addressing why 3 act structure is difficult to adapt to games for an odd reason. 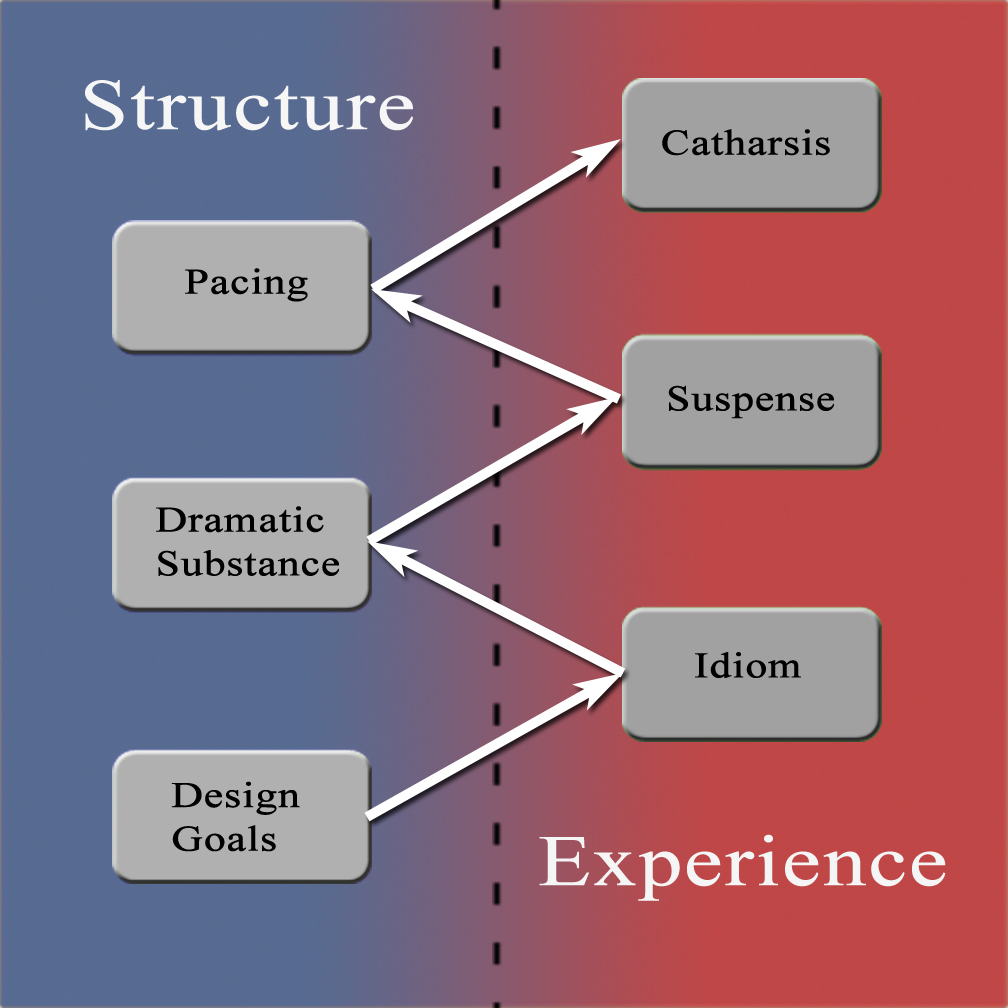 Catharsis is what springs from an intense sometimes overwhelming emotional release. Facilitating that release is the central goal of dramatic structure. And Pacing is what we use to describe how the elements of an experience are arranged in order to enable Catharsis.

The term is derived from the Greek word Katharsis meaning purification or cleansing. Catharsis as a dramatic term was first used in Aristotle’s Poetics (335 BC) as a way to describe the effect powerful tragic stories had on people. How the powerful emotional release created by a story was able to cleanse the audience’s minds and souls.

As mentioned above, one of the most important goals of artistic and emotional media is to give its audience a sense of Catharsis. Formally defined, Catharsis is a sudden emotional breakdown that constitutes any overwhelming change in emotion, so intense that it results in a feeling of renewal, revitalization, or enlightenment. It is the fallout after you build the emotions of a story or experience to a critical mass and resolve them.

This explosion of raw emotional release is this first thing people remember about an experience. If a work achieves it, it will color the memory of the entire experience before it and after it in the person’s mind. As such it is one of the most important things we look to evaluate the dramatic power of a game.

Catharsis can occur several times over the course of a game with varying intensity. It isn’t tied to any specific variety of emotion or even an explicit narrative.

These are all examples of Catharsis despite having a wide variety of emotion and intensity.

And that brings us to Pacing

Pacing constitutes the speed, rhythm, and tone of the emotional events that build the rise in intensity that leads to Catharsis. A useful analogy for Pacing a story is composing music, with emotional tones taking the place of musical notes. In both media we deliberately arrange their elements in time to achieve an aesthetic effect. And while Pacing in games is an extremely unique process as we will soon examine, It is simply what takes the emotional substance create by the other dramatic elements and patterns them into an engine of Cathartic release.

A game with poor Pacing will create an experience without a grand sense of investment. That leaves the player unable to achieve Catharsis no matter how successful the other elements of the game are.

How do we go about pacing games and understanding how they are paced?

First and foremost we must understand that Videogames are not Movies or Television Shows. This may seem obvious but it is something that must be examined in depth in order to understand why many ideas of pacing that work in film do not work in games. There are two key qualities of games that we need to consider when Pacing them. They are Interactivity/Non-Linearity and Length.

These are all mechanical cycles that structure the gameplay into a rhythm beyond just that of the explicit narrative. From this it is easy to see that a game’s pace is determined by its mechanics as much as if not more than its explicit narrative. Using mechanics to structure play allows us to reliably Pace non-linear and player driven games.

The other major quality we need to consider when Pacing games is sometimes hard to recognize as a problem, Length. There are no conventions or restrictions that realistically dictate a game’s length. Movies and Tv have a set of standard formats because of the nature of theaters and television networks. Games are played in dozens of different formats on dozens of different platforms and will likely never see the strict standardization that we see in Film. There are only three major length format in Film: Half an hour, 1 hour, and 1.5 to 3 hours. The acceptable length for a Game ranges anywhere between 5 minutes to 300 hours. And even when we focus on the average big budget title we see a range from 8 hours to 30 hours.

To add more difficulty to analysis this aspect of length regularly leads to games needing many more Acts that we normally see in other media. As we are about to see many games indisputably contain 20 or more Acts. Though first we must define what is commonly meant by the word Act. An Act is a division or unit of a story. This term is usually reserved for the largest division/unit in describing a story with sequences, scenes, and beats following in a descending hierarchy. The end of an Act is most usefully described as a point where a meaningful and usually irreversible change in the story occurs. This can mean anything from an important characters death to someone saying “I love you”. For every story “meaningful and irreversible change” can be anything as long as it’s important to the story. Here are three examples of Act breakdowns in games.


Pokemon Red and Blue - Total Acts 23
Breakdown: 9 Core acts: Acquiring 8 Gym Badges and Challenging the Elite Four
14 Secondary Acts: Other important sections that are integral to the main plot like the SS-Anne, Rocket Hideout, Victory Road, Mt. Moon, etc. That while secondary have their own seperate meaningful struggle with escalating action leading to an immutable change in the game story.

And thats just for the main story, there are 151 smaller independant story movements in capturing all 151 Pokemon.


The Elder Scrolls V: Skyrim - Total Acts 29 + 52 Side Quest + 50-80 Player Levels
Breakdown: 8 Core Acts: Main Questline,
21 Secondary Acts: 7 Guild Quest lines 3 Acts each,
52 Side Quests: Smaller Side-Stories that the player can complete.
50-80 Levels: Each time the player levels they gain incrementally more power as a result progression to each level gain is a small story in and of itself.

In other media we commonly see stories being told in only 3 Acts. Three Act Structure is by far the dominant form in today's film industry, but there exist many other structural forms that range from 5 Acts (Shakespeare) to 14 Acts (Campbell's Monomyth). And while these Act Structures are a useful system for structuring individual plays, films, or television episodes, As we see above it is not adequate to Pace or deconstruct the story for a 8-100 hour experience like a game. And in reality it is not adequate to describe the Pacing of larger works in any medium.

The Odyssey: Total Acts: 24
Breakdown: Each book of the Odyssey constitutes a single act

As we see above larger structures like Trilogies, Seasons, Series and Epics create Pacing structures similar to the above Games. At this scale both media move toward a different kind of Pacing system.

Arch-Pacing, describes the pacing of works that extend beyond the scope of a normal individual Story. For its general use we will use it to evaluate the pacing of anything larger than a single Film, but the strict definition is any work that is not comfortably or ideal experienced in a single contiguous instance. Most modern games fall into this category of extreme length. When Stories, explicit or implicit, extend beyond that scale they fall into a range of forms that used in Arch-Pacing.

There are three core types in the form spectrum of Arch-Pacing.

Epic Pacing describes the structure of a work that has a single focused narrative that extends beyond eight acts. This style of pacing is normally entirely contiguous, meaning there are usually no arbitrary starting and stopping points in the story and the audience is normally left to decide where the natural break points in the experience will occur. The contiguous nature also lends this format for telling a story without significant tangents or self contained events, all of the events of an Epic tend to be a part of a single spine leading inexorably to a final conclusion. Specific examples are: Ocarina of Time, Breaking Bad,The Epic of Gilgamesh, The Godfather, The Halo Series, Moby Dick.

Episodic Pacing describes the structure of a work that is made up of several interlinked but independent narratives. This style of pacing commonly is semi-contiguous, meaning it has arbitrary starting and stopping points separating the work into “episodes”. The real distinction of this form from Epic Pacing and Iterative Pacing is that a work with Episodic Pacing will have numerous tangents and or smaller self contained stories but will still contain a core driving plot or narrative focus. Specific examples are: How I Met Your Mother, Doctor Who, Lost, TES V:Skyrim, Cowboy Bebop.

Iterative Pacing describes the structure of a work that is composed of a set of weakly related narratives. This style of pacing is non-contiguous, with each section of the work nearly being an independent piece of work in and of itself instead of part of a whole. These are commonly works that use a cast of characters or particular setting to generate a large array of stories. Though this form type also includes competitive video games and Television game shows, where each “round” of the game is an implicit narrative. Specific examples are: Star Trek, Law and Order, League of Legends, House, Jeopardy.

These three types create a spectrum that we can use to more easily define the format of longer works like Games. And now with this understanding we can begin to unpack the real implications of using Arch-Pacing over standard pacing.

Any work that extends into the spectrum of Arch-Pacing must have multiple cycles of Catharsis to be effective. The real limitation of 3 and 5 act structural paradigms is that they are formats for delivering a single instance of Catharsis. As a Cathartic cycle grows in length it becomes more difficult for both the creators and audience to maintain the Suspense needed for an effective emotional release.

If a story does not achieve a cycle of Catharsis within a reasonable time it will being to feel like it is dragging on or worse yet your audience will begin to lose interest entirely. The solutions to this issue are simple ones. Either you can restrict your story to a single Cathartic release and in turn be forced to reduce its length in order for it to be effective (3-5 Act Paradigm) or you can structure your story to have multiple moments of independent or compounding Cathartic release (Arch-Pacing Paradigm). Although Pacing is vital for creating Catharsis, it is only the structure that the emotions of a game’s experience are ordered in. In order to create those emotions in the first place we need to go a step deeper and examine the actual fuel of Cathrasis, Suspense. In the next article we will cover exactly what Suspense is, why its important, and how it’s created by proper Dramatic Substance.

www.Ehilldesign.com
Evan Hill can be contacted at:
[email protected]


--------------------
Special Thanks to:
Alan Emrich (Victory Point Games)
Jeffery Yohalem (Ubisoft)
Brian Kindregan (Blizzard)
Gavin Jurgens-Fyhrie (Blizzard/Snail Games)
Justin Dye (Blizzard)
Michael Shaneman (GameGeist.com)
And to all of the other people who helped me edit and refine my ideas for this series over the past few months.