How did Telltale and Mojang turn the ultimate sandbox game into a narrative adventure? By taking inspiration from stories that Minecraftplayers create...and from the movie Goonies.
Kris Graft
Publisher
October 09, 2015

A partnership between Minecraft creator Mojang and The Walking Dead developer Telltale seemed very strange when first announced. Minecraft is a game about creating your own stories by interacting with its procedurally-generated worlds and crafting and building systems, whereas Telltale makes narrative-driven stories centered around pre-authored dialogue and decision trees.

But representatives of the two studios tell Gamasutra that bringing together their starkly different styles for a series episodic adventures was a completely natural move.

Finding the narrative in Minecraft

The Mojang/Telltale tagteam begins to make more sense when you consider the stories that naturally seem to grow up around Minecraft. There are the hundreds of community-created Minecraft stories posted to YouTube every day, or the Let's Plays that recount a personal quest or adventure. Beyond that, people make short films and machinima with the game, and record songs about their exploits in the game.

"For the last year, we've had a private Telltale Minecraft server, and we've been documenting everything that's been going on in there"

These community stories and the many other ways Minecraft players exhibit creativity in and out of the game were integral to the development of Story Mode. Telltale tried to draw inspiration for characters, places, and plot points from things that happen organically in the community. They didn't just observe, either. They chronicled their own in-game experiences.

"For the last year we've had a specific private Telltale Minecraft server," says Job Stauffer, creative communications director at Telltale. "We've tinkered around in Telltale town and built all kinds of contraptions and buildings, and we've been documenting everything that's been going on in there."

He says that one incident with a chicken machine that went haywire even made its way into the game.

Mojang and Telltale are quick to stress that Story Mode is not the official story of Minecraft. It cannot be an official canon or mythology, because no such thing exists.

"We didn't want to explain exactly what a creeper is," says Owen Hill, creative communications director at Mojang. "It's good to have some mystery to these cool mobs and stuff."

Hill cites the Far Lands as an example of mythologizing done by the community. When you get far enough from the origin or spawn point of a Minecraft world seed, the algorithm that generates the world begins to break down and falter. "The world starts to look really freaky and a bit weird," explains Hill. "And people read a lot into that. They call it the Far Lands and it's this mysterious area." 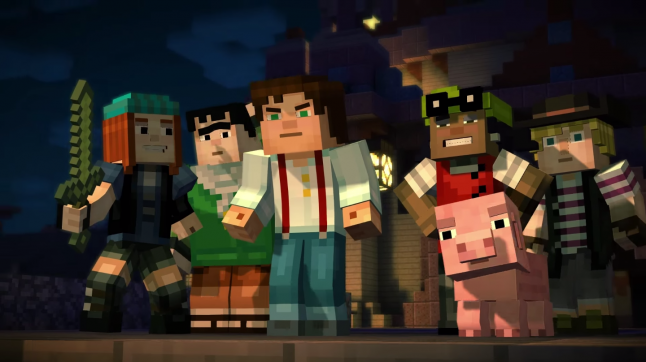 "When we first sat down with Mojang to talk about what the story was going to be, we started with Goonies and Ghostbusters."

Story Mode stars a character called Jesse--who in a first for Telltale can be male or female--and Jesse's friends. Their adventure initially revolves around four legendary heroes who are each based on archetypes the Telltale team identified in the Minecraft community. There's an engineer who's great with contraptions, an architect who likes to just build things, a warrior who excels in monster slaying, a rogue--some might say griefer--who enjoys ruining other people's creations and generally being annoying.

Stauffer is reluctant to elaborate on how Telltale has avoided the pitfalls of designing characters to fit each of these archetypes, for fear of spoiling the plot of later entries in the series. He does note that the protagonist Jesse and Jesse's friends all harbor a sort of "paragon ideal" of the qualities of the heroes that they're mimicking. Eventually, the group will meet characters who embody these heroic ideals, at which point the dynamic between "expectation and aspiration collides with the reality within the story," according to Stauffer.

The narrative draws on works beyond the Minecraft community, too. Telltale feels that they're trying to carry on the noble tradition of family-friendly adventure tales embodied in 1980s films like The Goonies and Ghostbusters.

Stauffer excitedly talks about how the film Indiana Jones and the Temple of Doom--the one where a man rips the still-beating heart from another man's chest--was central to the introduction of the PG-13 rating to American cinema, thereby creating a niche between adult and family movies such that teenagers weren't excluded from gorier, darker plot lines. The downside to this was that there were fewer big budget films being made without scarier and more intense themes.

"But we loved seeing those [family films] when we were growing up," says Stauffer. "When we first sat down with Mojang earlier last year to talk about what the story was going to be, we really started with Goonies and Ghostbusters." 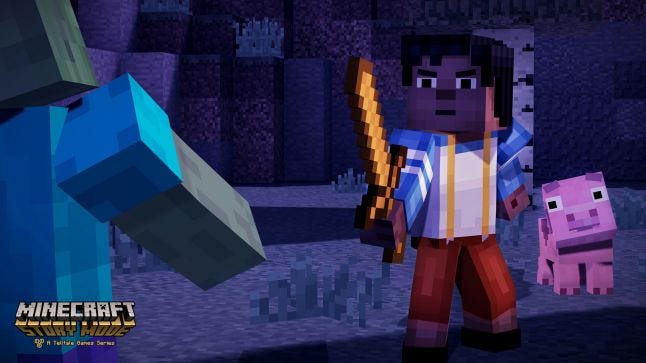 Story Mode took shape as a classic group adventure in the spirit of these films. It was also in line with what Telltale identified as the common themes of Minecraft. "[There's] survival, crafting, adventure, and if you're playing on a server there's also the themes of playing with your friends," says Stauffer.

In many ways, it's a return to the roots for Telltale. Before delving into the mature licensed content of recent years--The Walking Dead, The Wolf Among Us, Game of Thrones, and Tales from the Borderlands--Telltale was known for its lighter fare. The Back to the Future, Sam & Max, Monkey Island, and Strong Bad series (among others) all straddled the line between adult and kids entertainment.

It's this culmination of many different influences and ideas that Telltale and Mojang hope will make Story Mode palatable to a broad audience. Older people can enjoy the 80s film references and the familiar voices of the cast--some of whom were actually in The Goonies--while younger players get to appreciate the Minecraft and internet culture references that are more familiar to them.

And as with prior Telltale adventures, for those who don't "get" Minecraft, this new Story Mode is meant to serve as a more approachable introduction to the themes and ideas and especially the elaborate design logic of its source material.

"We worked with some of the members of the dev team to make sure everything kind of made sense within the world," says Hill. Mojang wanted to make sure that it preserves the art and animation style, while still offering a bit of leeway in how the characters can express themselves, and also to ensure that it contains crafting.

The same patterns and materials are used across both games so that anyone who plays Story Mode and crafts a sword with Jesse can then hop into Minecraft and know how to craft a sword there, too. The logic is the same, only the language and perspective through which you interact with the world is different; it's now cinematic and tailored to a narrative.

For Telltale, then, Story Mode is little more than business as usual--it's a game that tells stories and finds character and theme-driven narrative threads in an established, beloved universe. All that's different is that this world has no predefined characters--only predefined systems of logic and design.

But for Mojang it's a tentative step into a world of narrative. One that surprisingly is not part of some grand plan, despite the line of Minecraft novels hitting bookstores now and the coming Minecraft movie that's in preproduction.

"We're not going to go out looking for something desperately in order to expand the narrative," says Hill. "It's not like we sat down and went, 'Hey, we need more ways to make narrative in Minecraft.' But if something cool comes along and it kind of fits, and we feel like we could do a really good job and do justice to the game, I don't see why not."

All it comes down to is protecting the brand and watching to see what the community wants. Hill says that the reception of Story Mode may influence Mojang's future choices, but he stresses that it always comes back to the community. "[Minecraft] wouldn't be anywhere near as big if it wasn't for that," he says. "We made this game and people embraced it and not only have they built cool creations [in the game]; they've made so much stuff around it."

Perhaps the core narrative of Minecraft isn't so hard to find after all. It was always there, right beneath the surface. It just took Telltale to point it out to us.