The story behind NetHack's long-awaited update--the first since 2003

Meet the team behind the 3.6.0 update of the venerable NetHack--the first update since 2003. Some are former fans. Others have been involved with the game since it first debuted in the summer of 1987.
Phill Cameron
Blogger
April 15, 2016

The recent update to NetHack has been eagerly awaited by fans of that game for the last thirteen years. This shadowy group behind the update, known by fans simply as DevTeam, can be very tight-lipped about what they're up to. The community has generally viewed them with a sort of worshipful awe as they have slowly added new depth and sophistication to the game with each iteration. (A popular catchphrase is TDTTOE, or "The DevTeam Thinks of Everything.")

The release of the update seemed like a great time to talk to the developers of this beloved title, about the past and future of the game, and the devotion of the fan community that makes its ongoing development possible.

First, a bit of background. You don’t have to look far on Steam to find some new title that draws on the concepts and mechanics of the 1980 computer classic Rogue. 1987’s NetHack is one of the most well-known and beloved Roguelikes. With the mechanics of Rogue, a simple but surprisingly sophisticated and expressive ASCII art style, and a wicked sense of humor to go along with it, the title continued to grow and be supported by its devs and community until December of 2003. After over sixteen years of support, the last NetHack release appeared to be version 3.4.3, released in 2003.

However, the game itself continued to evolve, thanks to the dedicated community that formed around it. Newsgroups, forums, and eventually social media kept the game thriving. New tools and add-ons were made by players to enhance and expand the game beyond what the dev team had accomplished.

Last December, NetHack 3.6.0 was finally released. Besides the usual bugfixes and optimizations you'd expect, many community add-ons were incorporated. The dev team embraced the community that kept NetHack going, and in doing so, they showed how strong an influence a community can have. Indeed, many devs are former members of the fan community.

Why would this game, that had stopped getting updates for twelve years, warrant a new release?
“The actual question should be ‘why not?’, " says NetHack dev team member Mike Stephenson. "Your question talks about NetHack as if it is an artifact of the past, Based on the amount of interest in the variant community, NetHack is very much alive and well in numerous incarnations.” 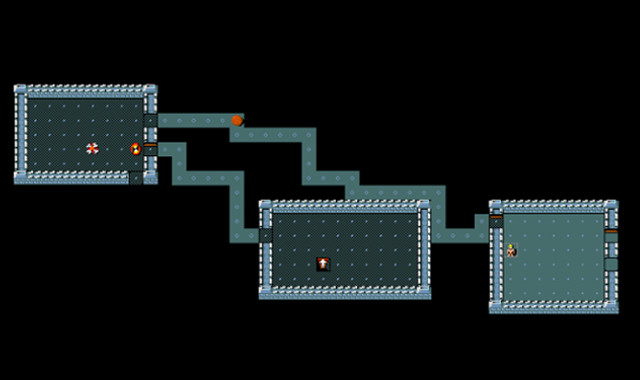 Stephenson's been part of the game since before the beginning, working on the precursor Hack that appeared in 1985, and helping to produce and co-ordinate several releases of NetHack since then. In a lengthy email conversation, he and other members of the dev team insist that despite the length of time between its iterations, the game is still relevant, still extremely popular, and continues to be a major source of entertainment and inspiration in games.

"People who have been playing the game for years still get excited when something good happens to them, when the ascend, when they discover something that the dev team thought of that impresses them."

“Most titles run their course because they can only be played so many times before becoming repetitive," says team member Paul Winner. "That cannot be said about NetHack.  People who have been playing the game for years still get excited when something good happens to them, when the ascend, when they discover something that the dev team thought of that impresses them.”

According to Winner, NetHack is different than some other titles because of the way the community interacts with it. With discussions on all forms of social media, from old bulletin boards dedicated to it, some of the busiest newsgroups, and now modern social media sites.

The community quickly brings a working version of the game to newly released technology, and they continue to port it to archaic technology. “There was a working Atari version long after the Atari disappeared,” Winner adds.

Winner has been invested in NetHack for quite a while. He was initially drawn to its precursor Hack by its difficulty, its nonexistent price, and the ability to run on an MS-DOS machine. NetHack and its community came along, and eventually he contacted the dev team with a list of bugs. This got him in touch with the team porting the game to DOS.

“After proving myself over time, I was invited to be a part of the dev team,” Winner says.

“It feels great to be a part of the game,” he adds. “There is so much richness to it, an attention to detail that shows the pride of the people who made it." 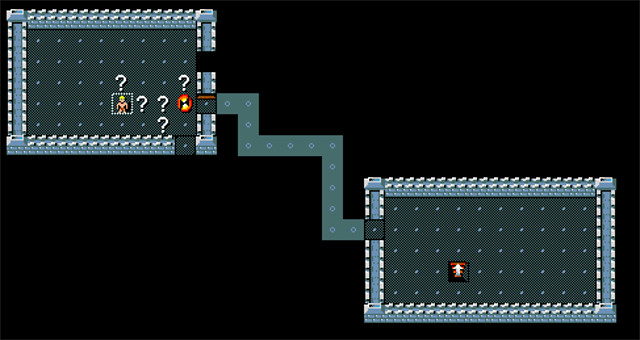 Winner says that he's traveled to Canada and Detroit to meet some of his fellow devs, and connected with others at a meetup in a train station. "The people who have worked on the game over the past decade have been wonderful," he says. "It also feels good to read the emails we get from people saying how much they love the game. There aren’t a lot of things you can do that provide such wonderful feedback.”

Not all additions to the dev team are former hardcore fans. A member who goes by “Keni” came to work on the project not by playing the game, but rather by way of working on his Amiga coding skills from Usenet comp.sources.* groups.

“I ran into a problem with NetHack,” he says, “which turned out to be a compiler bug (NetHack has a long history of breaking compilers and other tools). The conversation with dev team led to me working on the Amiga port for a number of years, then on the web site when that became an option around the same time the Amiga was dying out.”

When asked about working on a historic title like NetHack, Keni replies, “I never really looked at it that way. While Unix was evolving around me from Berkeley 4.2 to 4.3, SunOS to Solaris, and the rise of Linux, NetHack was the next upgrade from Rogue after Hack."

"With thousands of players, this was my first exposure to working on anything with so many users," Keni adds. "It’s been really great to give back to the community this way. It’s all moved in parallel, and there’s no reason we can’t keep it moving.”

The newest version has incorporated community add-ons, such as Roderick Schertler’s pickup_thrown patch which allows for thrown items to be picked up automatically. Another such addition is the menucolors patch by one of the newest dev team members, Pasi Kallinen. This one allows the player to choose custom colors for individual rows in menus to make finding specific entries easier. 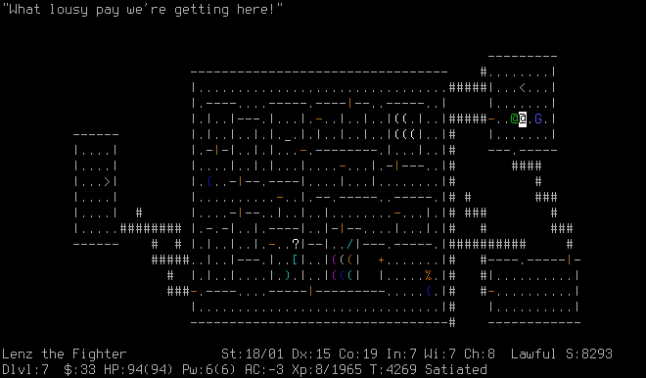 Kallinen first discovered NetHack from a gaming magazine in early 1990, and was interested in playing it as it sounded close to what role-playing games were, with plenty of freedom in how to use items and solve situations.

“I soon got the game on one of those mail-order game diskettes, and spent several nights playing it on the Amiga 500,” Kallinen says. “Eventually I decided to add something to the game, and it was a very educational source diving trip. Hacking NetHack was also the reason I started using Linux; the tools on Windows just weren't adequate.”

To him, there’s a feeling of continuity working with the code. A good addition will feel right for NetHack, and vice-versa. He also notes there’s the pressure of making a good game when working on the code – something that is challenging to experts and long-term fans, but also not unnecessarily cruel to new players.

Kallinen went on to talk about the updates and add-ons included in the 3.6.0 release, stating, “I of course chose my own patches, and several others I had incorporated into the previous version on nethack.alt.org. Unfortunately there are some I wanted to add, but could not justify; perhaps because they were server-specific, or the code was too messy, or would've required a total rewrite for 3.6.0. I expect the team will be more transparent and approachable, or at least I will keep on hanging out in the usual places on IRC, Reddit and elsewhere.”

Stephenson elaborates on the question of choosing what to include, “There are a number of potential user community changes that we are looking at adopting into the ‘core’ game.," he says. Regardless of the change, however, there have always been a number of criteria the team uses to assess potential new features, the most important of which are (1) Balance and (2) enhancing the game experience.

"The ‘Net’ part of the name came about because the Internet was being used to develop the game and to talk about the game. With each release, that aspect of the collaboration gets more and more beyond how it worked a decade ago. "

I asked what surprises came along with the new release, either from the community or from a development perspective.

“For me, the surprises weren’t so much in the game itself--I have followed many of the variants over time," says Winner. "It was looking at the tools used today to put all of these things together, to pull a release together, and to get it out there. The ‘Net’ part of the name came about because the Internet was being used to develop the game and to talk about the game. With each release, that aspect of the collaboration gets more and more beyond how it worked a decade ago. And yet, when you look at a patch, it’s still K&R C code. It is still recognizable.”

Overall, Winner says the community response to the update online and in gushing emails has been fantastic. “There has been some complaints about how we ‘broke’ the game when the Elbereth nerfing was found out," he says. "But I consider the old E behaviour to be the broken one -- it was just too strong and exploitable. Some people have even said they will not update to the newest version, which is of course their prerogative.”

That sort of stubbornness comes from a place of passion. The community is still strong, and will likely continue to guide the development of NetHack. DevTeam will continue to work with them, wwhether it's in the form of add-ons like Kallinen that are eventually folded into the main game, or the discovery of talented coders like Keni.

When asked about the future of NetHack, Winner replies, “I can never imagine what is coming next. Things you think would be easy turn out to be harder than you thought to accomplish. Real life gets in the way of long coding sessions, unlike years past. I think it is safer to say what is not going to be next. It is a pretty safe bet, I think, that you won’t see light sabers and storm troopers in the game!” 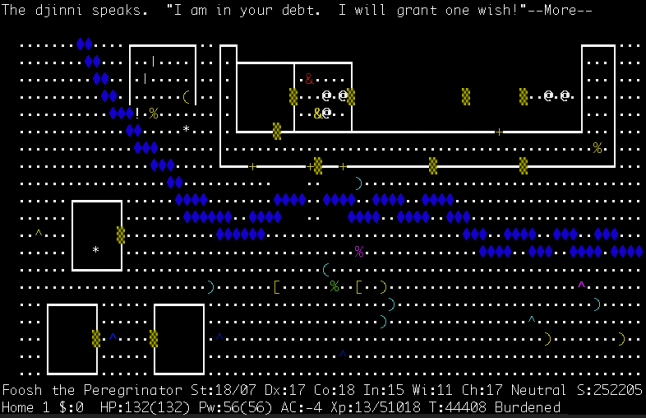 “I think you know the standard dev team answer for that question -- we tend not to tip our hand," says Stephenson. "Although I can say with certainty that the next release won’t be nearly as long a wait as this one.”