The Psycho Tricks of the Game Designer

We are all being manipulated!
Thomas Johnson
Blogger
November 07, 2018

We are all being manipulated! Whether in The Elder Scrolls 5: Skyrim, Call of Duty: Ghosts or Need for Speed: Rivals, we always believe players have full control. With these four tricks you are manipulated in games!

In June 2006, two US psychologists published a small study entitled The Endowed Progress Effect: How Artificial Advancement Increases Effort. What lies behind this is quite simple: If people are relieved of their job with an initial success, they are more willing to persevere and actually end it. In the study, the scientists issued stamp cards of a car wash, which promise a free car wash when all fields are stamped. The test candidates were divided into two groups. Group one received a stamp card with ten boxes, with the cashier stamping two boxes at the start, beaming with joy.

Group Two just got a card with eight empty boxes without a free stamp. The initial conditions were actually completely identical! Both groups had to collect eight stamps. The result, however, is amazing: 34 percent of the first group endured to the end and collected up to the free laundry. In Group 2, however, only 19 percent. But why? The subjects of the first group were given the feeling that they were already in the midst of the task and that they had achieved a first visible success with the free stamps. True to the motto: One has already done something - now giving up would be stupid! But how does it work in games?

Quite simple: In role-playing games, the search for rare objects does not begin with a dialogue and a separate mission, but with the discovery of a first object. Best example: the equipment sets in Diablo 3! If one of the rare armor pieces is in our possession, we are hooked and want to have everyone else. Or if 3 slaves have to be freed in Fallout, this task takes its course with the opening of the first cell door and the counter shows instead of "0 of 10" equal to "1 out of 10"! Above all, simple knitted collection missions can thus provide an additional game incentive and induce us to spend a little more time in front of the monitor.

Quest diaries are the sheer horror - no matter if in Fallout: New Vegas, Skyrim, World of Warcraft or even Dishonored: We are constantly being held up with what we still have to do or rather could do. Dozens of tasks we've picked up here and there. Missions that we did not even want to accept. Nevertheless, they end up in our journals unsolicited under items like "Unfinished Quests" or "Available Tasks". A way to just delete points from the to-do list? There is never really. All this has a method. Because what the game makers are aiming for here is the Cliffhanger or Zeigarnik effect.

Everyone knows it outside of games: it comes to mind to call an old friend again - and you carry the thought of it then for hours in the back of your mind. Or you know that there are still some mails in the mailbox or virgin books in the closet that you have not read yet. Or even this and that movie should be watched. This is exactly how this principle works: We better remember Fallout 3 things we did not do than remember those we completed. "One possible explanation for this effect is that our minds are pursuing potential goals," explains psychologist Tom Stafford of Sheffield University. "When these goals are ticked off, our mind turns back to something else." And that applies to games too.

Every time we look into our quest diaries, we see what tasks are still open: here the beacon of the lighthouse wants to be wiped out by loneliness, and the lone brigand troop at Camp Golf is set to work there. This remains in our memory, increasing the urge to complete the open tasks on our mental todo list - regardless of whether or not we find the tasks actually appealing. Worse, if we go to a job and break it off, it often torments us. There is also a name for this: Ovsiankina effect. 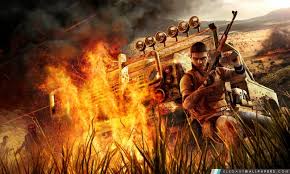 Exploding red barrels are a computer game cliché. But that's no coincidence. In fact, the color red triggers measurable reactions: Depending on the situation, it enhances feelings of pleasure, anxiety or triggers aggression and an attack reflex. Excessive could be said: Red barrels in shooting games make us angry and appear dangerous! Something that is not the case with other colors. That's what the studio People Can Fly - today Epic Games Poland - has learned quite well in the development of Bulletstorm. "At the beginning we had green barrels," the team wrote on the official People Can Fly blog. "They were completely ignored by the players and no one thought they could explode." By contrast, once the color was changed, players rarely spared a barrel. You can find many articles about the effects of color on the human brain on the Internet or buy cheap essay in different research paper services. In their work, you can find more detailed explanations and links to reliable sources

Most are red doors that can be blown up. For bosses attacking points pulsate mostly in red. However, the color red provokes a quick action! Because even when we sit relaxed in a round of Call of Duty: Ghosts - as soon as we are shot and the screen turns red from the sides, pulse and respiratory rate and blood pressure are unintentionally increased. A body reflex that, according to scientists, is inherent to us and our kin - for example, chimpanzees - for thousands of years, and which once served to mobilize the necessary forces to hunt a bleeding prey or escape from evil attackers. Thus, the so-called "Bloody Screen" in digital games - whether intended or not - is more than a simple indicator that indicates low health. "

4. Everything is so beautiful blue?

Not only what is red is important in video games. Rather, some developers train us in their games to just pay attention to specific colors. But in secret. Targeted areas in certain areas or open areas are dipped in special colors. For example, in Starbreeze's Shooter Syndicate: Here are passages, mostly passages to the next level section, always bathed in bright, white-blue light. In the first levels, this is obvious, but later imperceptible. "In level design, recurring patterns are very important," says Doom designer John Romero. "The player has to be guided, but he should not notice it, he should not feel patronized."

The Blue Continues Signal is a simple and memorable pattern that our brains automatically recognize, unconsciously track, and associate casually. Without thinking and cognitive effort, we know where to go. This color coding is a psychological function that plays a major role in many areas of life. In traffic, we are automatically alerted to blue light, we recognize yellow city entrance signs or the local police vehicles. And in the supermarket, we discover without thinking what our favorite cola variety is - in terms of color. We have learned that! Our brain uses this mechanic to give us the opportunity to focus on important things.

But not only in Syndicate, but also in other computer games, this system is used. Especially noticable? Sure: Mirror's Edge! In the parkour-action-adventure of the Battlefield-makers of Dice, the paths and doors to be used are all marked in heavy fire brigade red. A color coding, which is also badly needed in this fast game. Interesting, however: After a certain playing time, we no longer consciously accept the markings, but perceive them completely casually. We follow the red lines and doors almost automatically, as this clue slips from the conscious to the unconscious.