The Power Fantasy of Doom

Today's post looks at how the latest Doom created an effective power fantasy that controlled the mood of the story.
Josh Bycer
Blogger
July 05, 2016

Doom is one of the surprise hits this year and there are a lot of areas that we can talk about. For this post, I'm not going to focus on the game per se, but on our hero: The Doom Marine. The marine is a fascinating character and is a great example of how much the character has an impact on the mood in a story.

The Doom Marine (or Doom Guy) is a silent protagonist, but shows how much you can show a personality without talking. You can see him constantly not give a shit about the story around him, punish and brutalizing the demon horde and is constantly ready to kill something evil.

This all feeds into the sense of power that Doom tries and succeeds to instill in the player: That they are not weak. Doom is not a game about you quietly stalking around hoping nothing finds you. You are the monster of monsters: Something gets in your way and they are dead. Doom practically forces the player to be the aggressor thanks to the glory kill system and rewarding resources upon killing enemies.

Your weapons feel meaty and deliver destruction to your enemies. Basically, you are a bad-ass in every sense of the word. That last sentence is important, because things could have gone in a different direction.

Doom 3 was a polarizing game in the Doom series, and not just because of the flashlight. In Doom 3, the game played the horror aspect of the series without the power fantasy. Yes, you had weapons and were strong, but the pace was completely different. Every level put you in a dark area with enemies popping out of an endless array of supply closets. 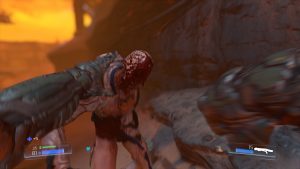 Doom despite being about fighting monsters is never scary, thanks to the presence of the Doom Guy

You were supposed to be scared of the enemies around you, not running at them like a bat out of hell. Every cutscene showed the main character with a look of fear on his face as the monsters showed up to attempt to scare the player.

Contrast that with Doom: The game opens up with you on a stone slab about to be sacrificed.

Instead of a moment of terror, the Doom Marine breaks free, kills a possessed with his bare hands and then gets his suit. From breaking monitors, cocking his shotgun, this is a character who is never scared, and the same feeling for the player.

So much about horror relies on the protagonist in question and their impact on the story as a whole.

I'm about to shock you with a stunning revelation: The Doom Guy is not a 13-year-old girl. Okay, maybe not so shocking, but it is an important point. So much about horror is based on the characters of the story. There is a difference between having a character who is constantly scared vs. a bad-ass regardless of gender. 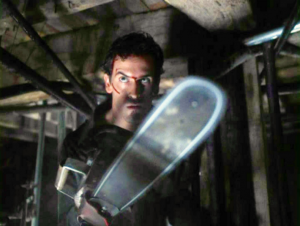 So many horror games and movies have used women and girls as their stars, because they want to invoke the feeling that the main character can't solve this with their fists like the macho action stars of other movies or games.

Most characters in a horror game are never the soldiers, but the average people. Even when they get weapons, it's never a power fantasy moment, it's a, "Oh my God, I have to fight this thing," moment.

My go-to example for this is still Evil Dead 2. Near the end of the movie, Ash suits up with his boomstick and chainsaw to go into the cellar. This is not a moment of power, but of fear; you can see the look of terror on Ash's face. Imagine if the Doom Guy was there: He would jump down without a second thought and proceed to kill anything he finds. 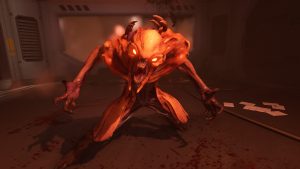 Effective horror is based on the protagonist's reactions to the monsters, not the monsters themselves

The same goes for any horror movie that would be transformed into an action flick with a different protagonist. Jason would not be so terrifying if he was staring down the Doom Guy's shotgun. With all that said, let's wrap up examining what this means for horror in general.

Horror is one of those genres that require the right protagonist or point of view for the audience. You can have brave characters in the world, but it's only the viewpoint of the main character that matters. Could Doom be a horror game? In its current form, that would be a hard no.

Characters can be strong and confident, but unless you show them being scared, then all you have is an action movie with monsters. One final example of this: The difference between Left 4 Dead 1 and 2. If you watch the opening cutscenes of both, they each show a different feel for the survivors. The first game feels like Day of the Dead, while the second gives the feeling of an action movie.

It's important to figure out just what the mood that you're going for with your game or story, as that will affect the main character. If you want terror, your main character should not be a happy-go-lucky person who always has a skip in their step. Likewise, if you want the player to have fun or be enjoying things, you don't want a downer of a main character who is sulking about the situation.

When it comes to telling a great story, you always need the right character for the job, even if that means someone who doesn't have time for the story.