This is my first post-mortem of a series about how a designer think about code. I decided to start with a custom controller for a 2D classic platformer game, in Unity.
Yoann Pignole
Blogger
October 10, 2013
** UPDATE ** My entire controller's source code is now available here !!

Hi everybody! With this “hobbyist coder” series, I want to share my experience as a…well…hobbyist coder. This sharing has two main goals: showing to non professional programmers making prototypes is not inaccessible and showing to professional programmers the way a designer takes on programming, and maybe have some feedbacks/advices about perfectible parts! Finally, it’s some kind of personal post-mortems… So, let’s start with the custom 2D platformer controller I made in Unity for a personal project:

Why using a custom controller and not the Unity’s default one?

You may ask yourself “but why not using the unity character controller from Unity?” Actually, I did. At least, at start! Then, I encountered some problems:

Nothing extraordinary here, there is a lot of tutorials about collisions on 2D games on the internet and the way I took is just a mix among different things I read and some of my own (unsuccessful) experiences.

As my prototype is a tile-based platformer, I could have used a simple system to check if the tile I want to move on is a wall or not. For several reasons, mainly because I previously had difficulties to handle slopes with this kind of approach, I chose a more versatile system, using raycasting to detect collision.

So, a basic collision concept is very simple: the controller moves with… a speed value, except if this speed brings its collider into another collider. So, we just need to detect these potential collisions !

To detect the collisions, as I said above, I use a raycast: when there is a speed value, some rays search for a collision in the direction of this speed, for each axis x and y. If the ray hits some collision, the hit point will define the maximum value the controller will be able to reach on the axis.

In pseudocode, it looks like this for each ray of the four directions:


If speed on x axis > 0
If raycast to the right hits a collision on point (Px,Py)
Set xMaxLimit = Px 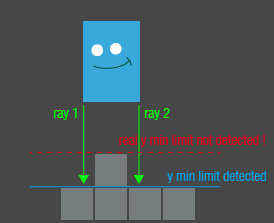 With more than one ray per side, I also have to compare their hit points P1 and P2 and keep the closest one:

Finally I check if the controller is blocked on each side to set the speed value to 0 in case of. If not, the controller will still be blocked but will keep a speed value against the wall. So, if you want to suddenly go the other way, you have to wait the opposite acceleration compensate the actual speed to finally increase speed in the other direction: it results a “stuck” feeling for the player.

The solution was pretty simple:

So, very simple and traditional way I guess...

Gravity is just a constant acceleration applied on speed on y axis each frame when in the air :

(I won’t talk about delta time here, as coders now exactly what it is and non-coders can find much better explanation on the internet, for example here : http://alexreidy.me/game-programming-an-explanation-of-delta-time/ )

I won’t explain the jump system I chose in details now (maybe another post…). The important thing here is that when a jump input is called, an impulsion speed is applied on the controller on y axis and then the gravity makes its job to step-by-step compensate the elevation and bring back the controller to a fall state.

Then I used the same system as above to determinate move limits and grounded flag:


If raycast to the bottom hits a collision on point (Px,Py)
Set yMinLimit = Px

You can see some variations with the previous code:

The importance of rays origins

It’s not a big problem and I guess not very hard to solve for a professional coder. But I took some time for me to and I really want to share the hard time I had to understand it :)

At start, my rays were generated from the exact corners of the controller collider. The problem is the controller was not able to handle correctly right-edged collisions. Now I understand it’s a question of code execution order that is much easier to explain with a little scheme:

So I found a solution casting rays from further to have a “buffer”: 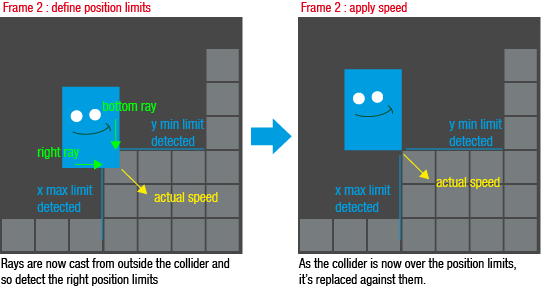 Slopes… it always frightens me when thinking about a collision system. It frightened me enough to really considerate the “no slopes” options! But, let’s see how I did to finally handle them!

Surprisingly, after I integrated the basic collision system, the controller was able to take slopes. Ok, really roughly, but it wasn’t stuck on them and it was encouraging for me  Actually, the climbing of slopes was pretty good, as the limit position on x axis was always “pushed back”. However, the descent was problematic because when the player was running very fast, he moved on x axis just before falling on the slope with gravity, resulting in a “bouncing” descent!

After trying a lot of solution to keep the controller on the ground on slopes, from different tutorial or by my own, I finally decided to use a simple one. Basically:

Detect if grounded on slope

First, to detect if the controller is grounded on a slope, I detect if it is “above a slope”. To do that, when one bottom rays hit a collision, I just check the difference between this collision normal vector and a unit vector to the right:


If raycast to the bottom hits a collision on point (Px,Py)
If angle between collision hit normal vector and right unit vector differs from 90°
set slopeOnHitPoint to true

Only one of the two bottom rays can’t determinates if the controller is really above the slope because of this case: 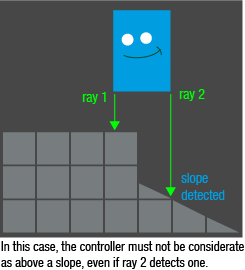 So to determinate if above a slope, one of the following conditions must be true:

Now I know if the controller is on a slope or not. I just have to determinate its position.
As I want the controller to “stay” on slope on its bottom center, I cast a vertical down ray from its center and use the hit y position as the new yMinLimit. 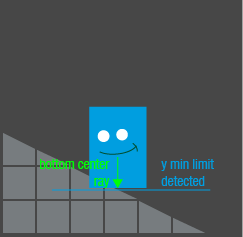 And now the peaks problem!!!

As soon as all these tricky stuff seemed to work, I encountered a new problem: the *[email protected]! peaks!! The fact is, as the controller is considerate on a slope when on a peak, it continues to define the yMinLimit with the ray from the center. So, as soon as the center goes over the peak, the controller goes through the collision as the yMinLimit is defined below: 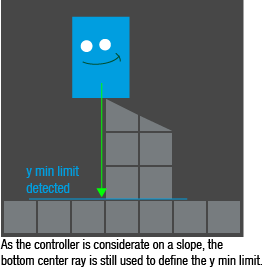 As a designer, I have to admit that I didn’t know at this time if I wanted to have such collisions in my game… But I didn’t want to refuse them just because I wasn’t able to handle them!

Actually, I didn’t found a clean solution to handle this case, but the one I chose doesn’t work so bad…

First, I check if my controller is above a peak which means, for a peak on the left: if slope detected with left ray AND distance between left hit point and center hit point > 5 (arbitrary value determinate with tests depends of tiles size, controller collider size, etc…).

Finally, if the controller is above a peak, I use the other side ray hit point to define the yMinLimit.

It’s not perfect because there’s no transition between the center ray and the side ray to determinate the yMinLimit and it results a little strange shift. But I haven’t lost hope in finding a cleaner solution someday!

In conclusion that was a really cool challenge for me to handle collisions myself and the result works pretty good for what I wanted to do. If some coders read this, I would be glad to have some feedbacks about this solution. I’m also asking myself if more complex systems of collisions with physics engines, working with different kind of geometrical shapes, are using similar approaches ? If you have some answers or reading about that, feel free to share and satisfy my curiosity ! Thanks for your reading and maybe see you later for another episode of the “hobbyist coder”!