The Hidden Level Design of Undertale

As a young game developer, I take a look at a few aspects of the massively popular indie title 'Undertale', and see what aspects of its level design are otherwise easily overlooked and discarded.
Sinden Enter
Blogger
November 11, 2019

One of my favorite games released over the past few years is Undertale. Undertale is a small indie game almost entirely created by one person, Toby Fox. The game is a small 2D RPG primarily focused on narrative and storytelling through gameplay. The gameplay is focused around puzzles and a bullet hell inspired combat system, where every fight introduces a new bullet hell minigame to the player.

The USP of the game, and the element it has been praised for most often, is the playstyle choice the game offers to players. The decision to fight and kill enemies or to spare them is completely up to the player, presenting them with a different storyline, different encounters, and different endings based on their decisions.

While looking into different opinions on the game, including analyses, reviews, etc, I discovered that a lot of game developers who commented on the game and its design, were very quick to dismiss any actual level design aspects in its design, shifting focus almost entirely to narrative design, combat design, and overall game design.

While I’m not claiming people are wrong to state that there is hardly any actual level design in Undertale, I personally feel like people might sometimes cast aside Undertale’s level design a bit too quickly. Sure, the levels and areas are very linear, straightforward, and don’t cover any specific design choices made for combat, exploration, traversal, etc, and the puzzles in the game don’t offer deep level design aspects either, but I feel like there are at least a few level design decisions that were made that have a bigger impact than people might realise.

After reading all of this, I decided to take a look at level design in Undertale myself. I am going to analyze some very global level design aspects that might easily be overlooked, and give my personal opinion on these decisions, the reasoning behind them, and the overall impact of Level Design in the game.

Admittedly, the things I touch on in this analysis are a bit of a combination of level design, general game design, and narrative design. Most design decisions in Undertale are a combination of at least 2 of the 3 since nearly everything in the game supports or reinforces the story elements.

Note: The conclusions and statements in this analysis are based on my personal views. We should also keep in mind that Toby Fox was very inexperienced at creating games when he worked on Undertale so it is difficult to know which design decisions were actually intentional.

Navigation and Progress through Level Design.

The first thing I want to touch on is the navigation throughout the game. While navigating through a 2D game isn’t usually considered challenging or difficult, it was exceptionally easy in Undertale. While playing the game, I have not felt lost or sidetracked unintentionally once. The navigation always felt really natural, and whenever I had multiple routes or pathing options, I intuitively picked the right one. The levels seem to be intentionally designed to be rather linear and straightforward to allow the game to focus more on narrative,  but there is more than that.

Intuitive Directions
Undertale takes something that 2D platformers have been doing for decades and adds a layer on top of that. The maps of the game always flow from left to right, meaning that the player will most often move to the right. By directing players into this behaviour from the very first room of the game, this intuition that has already been established by other 2D games gets reignited, creating a very familiar way of navigating through the levels in the minds of the players.

If you look at the overall map of the entire game, there is another prominent direction, which is up. Undertale not only focuses on bringing the player from left to right, but many areas within the game tend to send players upwards upon completion. This is another reason why players will rarely feel lost, because intuitively, they are likely to automatically start moving to the right and to the top of the screen in new areas.

If you look at the flow of each part of the map separately, you will find that earlier areas in the game tend to be rather flat and mostly moving to the right, while later areas will focus somewhat more on the upward movement. This is extremely interesting, since the shift in direction coincides with the ramping up and eventual conclusion of the storyline. As the player feels the storyline slowly coming to an end and the climax of the story getting closer, the level layout enhances this feeling by making the players feel like they are moving towards the surface more quickly.

So aside from the navigation reasoning behind this design decision, it also embraces and amplifies the narrative element of falling into a cave and having to travel through an underground world to eventually reach the surface again. For this setting, slowly moving upwards through your journey feels much more immersive and intuitive, especially with the upward movement accelerating near the conclusion of the storyline.

The Illusion of playstyle choice and difficulty scaling.

Undertale has often been lauded for its flexibility in playstyle and the possibility for players to choose how they want to beat the game (neutral, pacifist, or genocide). While this is definitely one of the strongest points of the game, this playstyle choice and the ability to pick your own playstyle is not as flexible as a lot of people think. If you look at new players starting up the game and starting their first run, the vast majority will end up in a neutral playthrough, not necessarily because they want to, but because the game lures them into it without making it too obvious.

The very first encounter of the game confronts the player with the malevolent flower called ‘Flowey’. Flowey initially tricks the player and tries to kill them, but the player gets saved by Toriel. Toriel then guides the player through the first areas of the game, teaching them you can show mercy to creatures you fight, thus sparing them. The way these first few encounters are set up in combination with the learning process the player is confronted with already sets up a duality between mercy and killing, but since the player has not yet discovered what actually happens after killing an enemy, they are likely to try it at least once (which would eliminate the possibility of a pacifist route), especially with the design of the level and the setup of the encounters feeling so treacherous at the start. 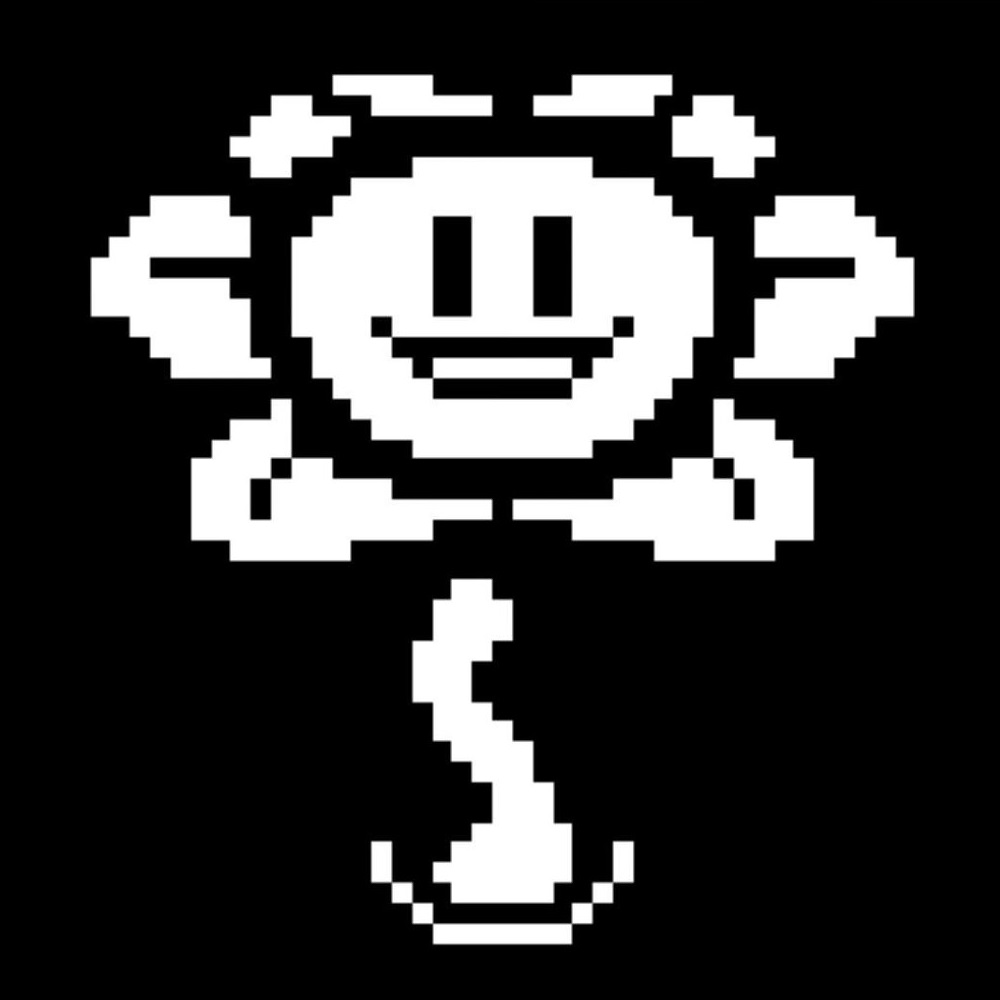 Flowey's transformation during the first encounter

There is also something that can be considered a failsafe that will still put players on the neutral route, even if they refrain from killing a single monster in the first areas of the game. Once the player tries to leave the ruins, Toriel tries to stop them, trying to convince them that they will die if they leave the ruins. When the player tries to leave anyway, the first boss battle begins against Toriel. There is no indication in this fight that it is possible to spare Toriel and continue the game, since the whole encounter constantly reminds the player that she is not going to let them go. Most players end up beating instead of sparing Toriel in their first playthrough, ending the possibility for a neutral route.

The genocide run on the other hand is relatively hard to achieve, requires a lot of grinding, and almost certainly requires prior knowledge about the existence of such a mode for players to even start that route, therefore this is also rarely the first playthrough for players.

Completing the genocide storyline requires the player to kill every single monster they can possibly encounter in every single area. This requires players to grind until they don't get encounters anymore before continuing to the next area.

So, why does the game almost certainly push new players onto the standard route? There are a few reasons. The first reason is that the storyline sometimes breaks the fourth wall, references other playthroughs, saving, restarting, and other stuff which I will not go into right now. The game also sends the players back with some cryptic dialogue at the end of a playthrough, motivating them to do another playthrough with a different playstyle.

The other reason is very simple… difficulty scaling! Doing a pacifist run requires the player to beat all the encounters in the game without gaining exp/leveling up once. Because the player will always stay on base hp, this is pretty challenging, and not suitable for new players. The genocide run on the other hand allows the player to gain a ton of levels, but there are some seriously challenging encounters made specifically for genocide, which is also not particularly suitable for new players.

The neutral route combines the easier encounters from the pacifist run, and the possibility for  players to level up and gain more hp. The way Undertale sets out its encounters and routes, combined with the way the first areas and encounters almost secretly force most players into the optimal route for new players without them even realizing it, is a great piece of design in my opinion, especially since it feels so subtle and natural.

The fight against Sans is notorious for being ridiculously difficult

Many people might not notice all of these design decisions because they are so subtle, which makes it very easy to say that Undertale “doesn’t really have any level design”. Although it is hard to say how much of these decisions were intended by Toby Fox, these elements definitely add a lot of value to the overall product and shouldn’t be disregarded completely.