The formal systems of games

In the second week of my Basic Introduction to Game Design course, I talk about games as systems, their formal structure and the elements that make games into games.
Lennart Nacke
Blogger
September 17, 2014

This is an except from a post first published at my own blog The Acagamic as part of my Basic Introduction to Game Design course. I hope this is useful to you.

Rather than pondering on the exact definitions of game here (many of which can be found in Rules of Play, Chapter 7), we want to look at what's most useful to us as game designers.

"Design is the process by which a designer creates a context to be encountered by a participant, from which meaning emerges." (Katie Salen and Eric Zimmerman)

This quote from the Rules of Play book encapsulates the main items that we should focus on as game designers: (1) Context, which can be the spaces, objects, story and behaviours that you encounter in games. (2) Participants are your players that act upon your game context for example via manipulation or exploration. They inhabit your game world to play. (3) Meaning is a concept that we have already mentioned in the last week when we talked about meaningful choice. When players take actions in your game, meaningful play should emerge from the agency that players feel. Meaning here is tied to the value of significance of something encountered in a game for the individual player. Even in real life, meaning is important to us because it helps us navigate through our world and interpret the people and the world around us. Our everyday interactions are guided by essentially guided by meaning-making.

"Design is the successful application of constraints until only a unique product is left." (Don Norman)

To develop a game, it is best to constrain ourselves at the start of our design process to some core elements of games. We begin by brainstorming elements that we find in all games. The results of such a brainstorm from class is shown below. However, as mentioned in the above Extra Credits video, there is no progress in exhaustively defining what exactly a game is. We simply use this as a starting point to wrap our head around the elements in games that we are going to work with as game designers. We have to start somewhere to develop this new medium and this list serves as a good starting point. 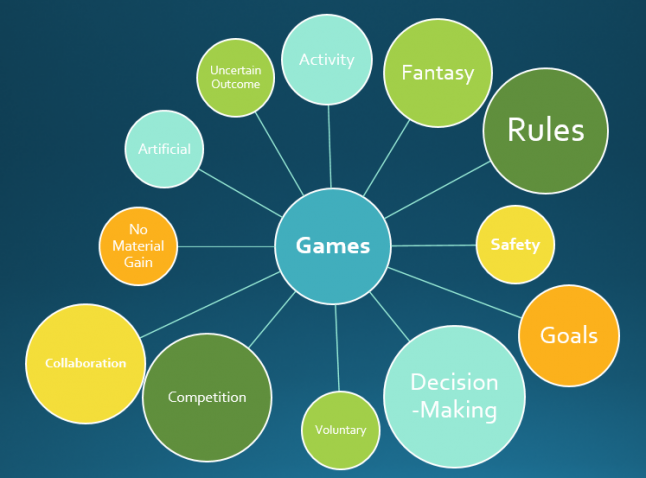 What are the elements of a game?

A game is a closed formal system that subjectively represents a subset of reality. (Chris Crawford)

We have already identified games as a space that exists as a subset of reality with boundaries and rules (we have even mentioned the concept of the magic circle in class, see below for an extra credits video on the concept).

We have already identified games as a space that exists as a subset of reality with boundaries and rules before. Games can be seen as sets of elements, but they are much more than just a set, often having internal relationships and states of elements that help them interact. At this level, it is most sensible to refer to games as systems. Now, systems can be seen as sets of items that can affect one another. The interaction among these set items can form patterns that are distinct from its individual parts (i.e., the whole is greater than the sum of its parts). Littlejohn and Foss discuss four system elements that are mentioned in Rules of Play (p.51) as well:

The easiest way to start seeing games as systems and to uncover their shared properties is to look at two games and compare them in terms of their commonalities and differences.


"Every game is its rules - for they are what define it." (David Parlett)

Thank you for taking the time to read this. I hope this introduction was helpful to you. Feel free to read more at my blog.