The Designer’s Notebook: We Don’t Need the Haters (and I Can Prove It)

A hostile and vocal subset of gamers is threatening to boycott the game industry if it makes hardcore games more accessible to women. This article examines the numbers to see if this warning represents a serious danger to game sales.
Ernest Adams
Blogger
August 23, 2013

The topic of institutionalized misogyny in game culture is finally getting the attention it deserves, and the situation is grim. Once again we embarrassed ourselves at the Electronic Entertainment Expo with a parade of booth babes and an Xbox One launch that featured a rape joke and not a single female protagonist among its launch titles. Try pointing this out to many industry executives and you’ll get a collective shrug. Try pointing it out in online gamer spaces and you get howls of outrage and a torrent of vile abuse from a small number of very angry men. The attacks get worse if the person who points it out happens to be a woman: death threats, threats of sexual violence, character assassination and cyberstalking are commonplace. Jennifer Hepler, a writer at BioWare, recently received explicit death threats... not to her but to her children, a new low.

The haters are simply infuriated at the suggestion that games might be improved by making them more appealing to women, and they’re warning us that they’ll do something about it. Apart from the abuse and threats, they say that they’ll stop buying games if the industry changes anything to make them more popular with women, and we’ll lose a lot of money. I decided to find out if we need to take this seriously, not just by arguing hypothetically, but by looking at some real numbers.

What Changes Are We Talking About?

So who is asking for a change, and what exactly are they asking for? I’m going to call them “progressive gamers,” for want of a better term; they’re both men and women. With respect to gender in games (the treatment of racial minorities or under-represented sexualities is a separate, but related issue), their requests are simple and few:

Now let’s take a look at what they’re not asking for.

In other words, progressive gamers are not trying to force designers to do anything. They’re asking for new games that they would find more enjoyable than the existing ones. It’s simple consumer activism, requesting products that better meet their wishes.

The players who oppose this, on the other hand—I’ll call them “reactionary gamers” because they want to keep things they way they are—are exclusively male. They say that they’ll boycott the game industry if it accedes to the requests of the progressive gamers. I’m both a progressive gamer and a game developer, so I have an interest in seeing more female-friendly games, but I also have an interest in making money, so I need to know if this threat amounts to anything.

Is There Really a Problem?

Before I get into that, though, we’d better see if there really is a problem in the first place. Some people claim that there are plenty of female protagonists already, so there’s no need to do anything about it. But is this true?

MobyGames is one of the largest databases of video games in the world. At the moment that I’m typing this, it contains records for 73,719 games. The data are entered by the community (with moderation from the site’s editors), and the site also includes the ability to add games to user-created groups of various sorts—effectively, a sort of tagging. The Protagonist: Female group documents games that only have female protagonists. Unfortunately, there is no group documenting games that only have male protagonists, so we’ll have to do some back-of-the-envelope calculations.

Let’s assume, very generously, that 90% of the games in MobyGames are gender-neutral. They either have no protagonist at all (e.g. Tetris), allow the player to choose between a female and male protagonist (Mass Effect), or allow the player to build a character from the ground up, including choosing its sex (Skyrim). I’m sure that’s an overestimate, but I’m giving the reactionaries the benefit of the doubt.

That leaves 7,372 games that have either a male-only (Max Payne) or a female-only (Mirror’s Edge) protagonist. Now, the number of games in the Protagonist: Female group at MobyGames stands at 1,327, which runs from the 1980 Apple II game KidVenture #1: Little Red Riding Hood to the 2013 version of Tomb Raider. In other words, only 18% of the total number of games with fixed protagonists have female ones. That looks like a problem. 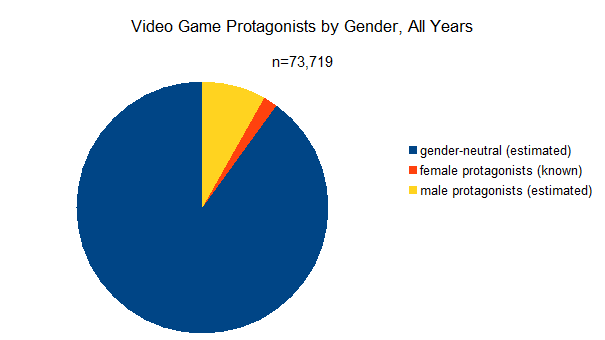 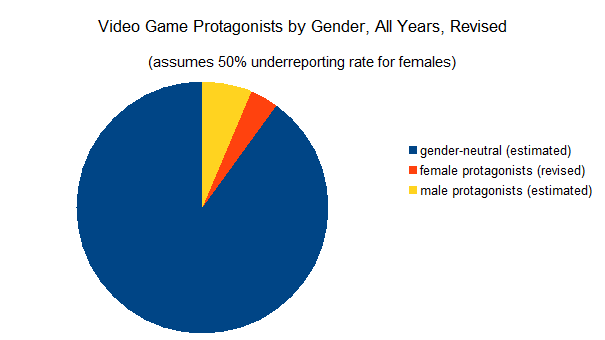 At this point someone is bound to argue that video games are aimed at men and so this imbalance is appropriate. But that’s not true; video games are not aimed exclusively at men and never have been from the very beginning: girls and women have played games from Pong onward. The game industry is not Playboy, despite occasionally resembling it. In any case, we know from the latest Electronic Software Association “Essential Facts” data sheet that the ratio of male to female players is 55% to 45%, not 64% to 36%.

In fact, I’m sure the discrepancy between the proportion of games with female avatars and the proportion of female players is much worse than that. I have bent over backwards to slant the numbers in favor of the “there’s no problem” viewpoint. So it’s pretty obvious that over the entire history of the game industry, games that offer a female protagonist are under-represented

What about the current state of affairs? Again using data from MobyGames, in 2012, the industry made 1,749 games. Ruling out 90% of them as gender-neutral as I did before, that leaves 175 games with fixed-sex protagonists. The number of 2012 games listed in the Protagonist: Female group is 17, or 10%. Doubling this to account for any female-only protagonist games that got missed, we have 34 games or 19.5%. 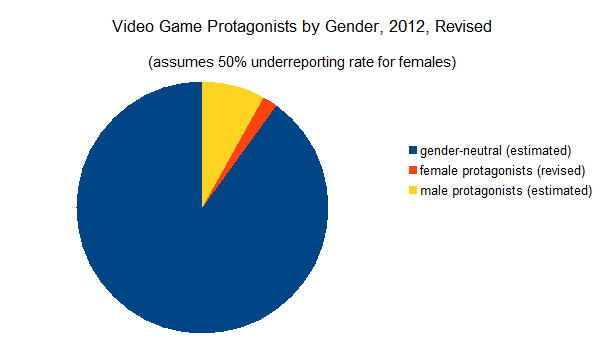 In other words, the discrepancy between the proportion of female players and the proportion of fixed female protagonists is greater now than it has been over the whole history of the industry. If anything, we’re going backwards—from 36% over all to 19.5% in 2012. Yes, there’s a problem.

The reactionaries will also undoubtedly argue that there are lots of games that are gender-neutral, and women can just play those. (This is that 90% group that I hypothesized.) There are plenty of RPGs in which you create your own character, male or female; isn’t that enough? Or Bejeweled. No protagonist at all in puzzle games, so no problem, right?

No, and here’s why. Interactive storytelling is hard enough to do well when the player can influence the plot (which is why many games still tell linear stories), but it’s extremely hard to do well when the designer knows nothing about the protagonist, including its sex. This is why adventure games, in which story is paramount, almost always have a predefined protagonist. The stories in games with a predefined protagonist (such as the Silent Hill series) are generally better than those in games with generic avatar. Telling female players that they have to be content with gender-neutral games consigns them to a second-class status in which they don’t get the best stories.

The Arguments Against Doing Anything

The next question is whether we should do anything about the problem. If you visit YouTube or the gamer message boards frequented by reactionary players, you encounter, again and again, the same set of arguments for not building any new games that the progressive players might like. I’ll summarize them here:

We can write off the first four arguments pretty quickly:

That leaves us with the financial argument, which is the only one that deserves serious attention. Let’s assume for a moment that the game industry is ruled entirely by money, and that profits are our sole consideration. Does the game industry stand to lose a lot of money by alienating men who don’t want games to have strong female protagonists?

How Important is the Hardcore Market?

To start with, the games that the reactionary gamers say that they’ll stop buying are avatar-based action games, RPGs, and shooters. They aren’t talking about aerial-perspective strategy games or Farmville. I know this, because if you point out that the casual free-to-play sector is making money hand over fist with very few hypersexualized female characters in it, they’ll say that those aren’t “real games” and their players aren’t “real gamers,” so they don’t count. However, to the game industry, every dollar counts. A dollar is a dollar regardless of what kind of game it was spent on.

The web site VGChartz.com documents global retail sales figures for the entire game industry since its beginning. They aren’t perfectly accurate, but they’re a good way of establishing the relative values of different titles. When sorted by lifetime global unit sales, the first fifteen games on the list are all casual or gender-neutral games and don’t contain anything that would discourage female players (a few might complain about the damsel-in-distress motif of Super Mario Bros., but it’s hardly Scarlet Blade). The top 15 includes such titles as Tetris and Wii Fit. The first hardcore game on the list, Grand Theft Auto: San Andreas, is at #16, and the next one after that is Grand Theft Auto: Vice City at #23. Five of the Call of Duty games are all clustered between #30 and 35. Or to look at in relative terms, Nintendogs has sold twice as many units as Call of Duty: Black Ops, and Black Ops has reached the end of its shelf life, so it’s unlikely to improve on that.