The design and iteration of tactical deck-building game Nowhere Prophet

It's been a good few years year for games that rely on a digital card game battling system. From Hearthstone to Slay the Spire, card-based battlers have had something of a resurgence, recreating the feel of a Magic the Gathering battle and turning abstract settings into clearly communicable card-based forms.

Nowhere Prophet, the latest of these digital deck-building sims, debuted earlier this year from developer Sharkbomb Studios and publisher No More Robots (which, full disclosure, is advised by GDC EVP Simon Carless). Shortly after its release, Sharkbomb's Martin Nerurkar dropped by the GDC Twitch channel for a chat about the design and development of Nowhere Prophet.

With so many developers looking to make standout games with familiar mechanics, we thought we'd share some key insights, straight from Nerurkar.

On fail states and randomization 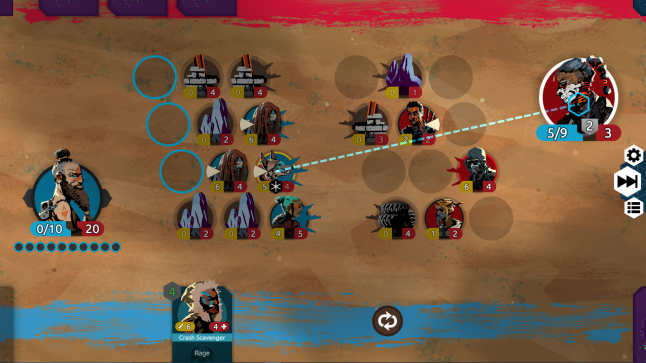 So in Nowhere Prophet, you don’t lose everything [in the fail state]...Even if you lose something, you still make some progress somewhere.

I think that’s a good start to make the fail state not feel super bad. But again, you don’t want to overdo it because then you can just grind your way through the roguelike by just getting really good by having high stats.

A lot of the stuff you can do is very predictable. There are some random effects - for example, Hearthstone has a lot of unpredictability to it which makes it really good for new players because they can win by pure luck.

But for me, it’s too much. That’s one of the things I really don’t like about Hearthstone; it’s too much randomness that can make or a break a game. You start to have these interesting puzzles: these are your cards, this is the situation. Then you sort of look for what’s the optimal play for this turn and maybe for the next turn and maybe the turn after that.

How to design effective card combos

A good combo, I think, needs to feel like the player discovered it. Like it needs to be, "Oh if I do this, and then this, this makes a lot of sense."

One thing I sort of found out during the design process of the cards and specifically again when I redid the equipment system a couple of months back, I threw out the old equipment system and completely redid it, because it just didn’t combo well enough.

I tried to come up with better effects that had more combo potential, kind of always err on the side of "Alright this thing needs to work in a certain way where a lot of other things can work off of it." 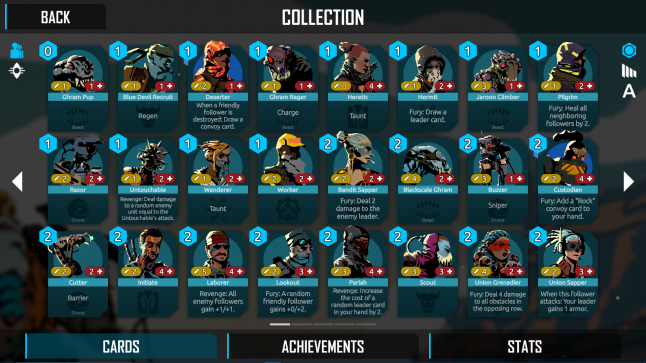 Iteration as a lone developer

The map we see currently, which is this very sort of FTL-like map, is like the process of three months of iteration of [art director Anjin Anhut] coming up with different versions of not doing this kind of map, but doing card-based or something different.

I just iterated away and came up with a lot of interesting ideas but nothing that really worked for Nowhere Prophet. With a card game, it ended up being too complex. I ended up ruling back everything and going with a basic, boring map. It works. 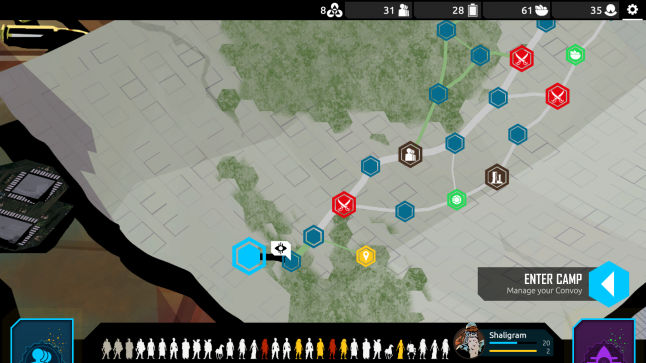 If anybody got the art book, there’s a bunch of early concept of the map travel gameplay. We tried isometric views, sort of card-based things and other choices.

Speaking candidly, I’m very proud of Nowhere Prophet, I’m very happy with the thing I built, but I would never do it again because I did it by myself. The example with this map iteration, we had a lot of cool ideas. I did a lot of brainstorming with my art director but he was never on an even level because he was freelancing - it was never sort of a ‘OK let’s talk about what’s best for the game’ it was more of a service provider.

I think at that point it would have been really useful to have someone to butt heads with and go, "Do we really need to do this? Is it really something that’s going to make the game better?"

Which is one of the big drawbacks to doing it alone. There’s nobody to keep your weird - because you introduced me as the lead developer, which doesn’t sit quite well with me 'cause I’m a game designer, goddamn it!

But keeping a designer in check is hard. I just want to do everything perfectly.

I spent a lot of time on the map, which was sort of wasted time cause I ended up with the thing I started at. But I learned a lot, had a lot of cool ideas - maybe something from that will be another game at some point.