This text examines how Bioshock:Infinite`s plot can be understand as the score of a composition and the gameplay of the Player as an interpretation of the score in the traditional sense of reproduction.
Andreas Ahlborn
Blogger
April 07, 2013 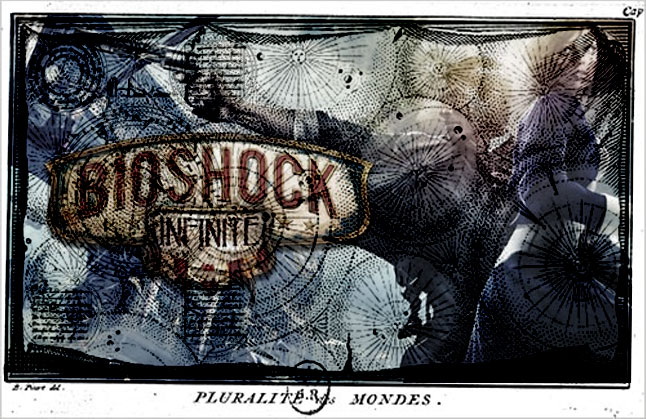 If you are reading this you will probably have played BS:Inifinite and either made up your mind about whether the plot and especially the ending is mind-blowing or merely confusing or still in the process of digesting the whole thing. I will concentrate in this text not on the question if BS:I works as a game but how it works as a composition, especially when considered as a contrapuntal one.

I will especially argue that the whole game can be understood as a Narrative Fugue, well aware that the root of the word Fugue is itself a Paradoxon, originating from both latin words “fugere” (to flee) and “fugare” (to chase).

The concept of multiverses, timelines and timetravel that is one of the many  subject(themes) of BS:I can be traced back 2,5 Millenia to the concept of the Musica Universalis, where the whole cosmos was considered a “harmony of the spheres” and where scientific (mathematical) and artistic (musical) works where considered equally valid perspectives of the same universal truth.

If we take the life and teachings of Pythagoras (of Samos) as a focus of that era, it must also be stated that his followers didn`t separate between Religion & Science, Phythagoras himself –as Aristotle reported- was said to possess the ability to travel through space and time (sic!). He was also a believer in Metempsychosis (the transmigration of the soul). All overtones that resonate well with the core of BS:I.

A Fugue is considered widely as one of the strictest musical forms, it`s especially difficult to master (transcend) because it grants the composer not much freedom to deviate from the path once the subjects (themes) are introduced. While BS:I contains many episodes, subjects (racism, exceptionalism, religion, sin, politics) and voices that would be interesting to explore on their own, I will focus this exploration on the Inner Circle of voices (Elizabeth/Songbird, Booker/Comstock) and the Multiverse-subject (theme).

Any fugue needs an exposition and BS:I`s exposition, the first 5 minutes of gameplay are crucial in achieving different things:

This motif of baptism/drowning is even varied in the scene where Booker manages to escape Songbird by dropping into an “artificial” ocean, a scene which anticipates the later drowning of the bird.

If BS:I would be an Opera then the vocal specializations of the different human protagonists could be described as follows:

This is merely to illustrate that while voices (characters) have a basic range wherein their choices (notes)  are limited they are able to gain the upper/lower hand inside a contrapuntal composition like a fugue and even while following different themes (motivations)  producing harmonies that are sometimes complex (polyphon) without getting confusing.

The musical world seems to lie in total harmony when Booker enters Columbia via a rocket-turned Lighthouse-capsule and enters a cave that resonates with a choir. This is clearly one of the many staged rebirths of Booker: the illuminated cave/crypt clearly alluding the comfortness of a baby in its mother`s womb, directly leading to the episode where he has a spiritual c-section (is blackmailed into getting baptized).

This is also the first introduction of sth. that the player is led to believe is a “Flashback”. The kind of memory that comes in form of a vivid, almost lucid nightmare to us. These Episodes always play out in Bookers old Appartment/Detective office, and in the very first of them we are getting in fact a glimpse of the future, which either could be memory from a Booker of a different timeline (which passes that memory of a future where Elizabetzh fulfills her fathers prophecy of “drowning in flames the mountains of men” (bombarding NYC skyscrapers).

In musicological terminology these flashbacks could be considered “false Entries”. These false entries are at first very rare until later on in the game they are used more frequently, finally in the last 15 Minutes of the game, false entries and regular episodes will merge and culminate into the final stretta of the game.

It seems strange that a game that circles around the subjects of choice and probability doesn`t give the player any choices to influence the plot much. Players today are accustomed that their choices matter, even the original Bioshock had two complementary endings (the good/the evil) which where based on the ethical decisions (farming vs. sparing Little Sisters) the Player made on her/his playthrough. But its only consequential considering the fact that BS:I chooses the Form of a narrative Fugue as its modus operandi. Many critics of the game misunderstood for example the fact that the player can –in principle- not die during the game (if he is downed he gets always resurrected by Elizabeth) as sth. which makes the gameplay trivial, unrisky.

The truth is death would be trivial if it would lurk around every corner and the mechanic of not allowing the player to die, but always getting him back from the brink of extinction with Elizabeth`s help, makes the final death (the smothering in the crib) so much more shocking. It`s also a smart thing to anticipate the final death in the reanimation-scenes with Elizabeth, the death in the end becomes a distorting mirror of all the resurrection scenes before.

BS:I has no Puzzles or minigames in it, there is no mechanic to distract the player from the main events. The only inclusion of a standard-“Puzzle” is in the exposition, where the player has to ring the bell towers in a certain  way to open the doorway to Columbia, and ironically enough the solution is handed him with his inventory-box. Interesting enough the player is handed the “key” (another musical innuendo) to control Songbird in the form of a symbol of a Cage, and Elizabeth figures out that it is actually a musical cryptogram, meaning it’s a code for the succession of notes (C-A-G-E) you have to play to control Songbird. (The most famous of this Cryptograms is the B-A-C-H motif. J.S.Bach is considered the main representative of contrapuntal composition in the history of western music, he is also the original composer of the composition which gave this article its title.)

THE FINALE ENTRIES WITH CODA

The last 15 Minutes BS:I manages to untie all the plot-knots (timelines) it weaved in the last 10+ hours, and it does it so masterfully, that the different subjects and voices are distinguishable until the very end, where the polyphony of the voices of the different elizabeths and the voice of the priest in the background culminate in a muted (drowned) crescendo.

The Post-Credits Scene can be understood as Coda.

BS:I poses an Enigma. In the form of a “game” it dares to tread philosophical terrain without “experimental” use of its given tools. It is highly conservative and shockingly progressive. Its structure leaves nothing to chance, but goes deep into questions like: What if? Are some choices reversible? What means guilt on an existential level? It is anachronistic and playful in its design but broaches the issue of the possibility of the plurality of worlds in a more satisfiable way than most books you can read about the subject.

It`s highly likely that in the future it will be considered one of the rare “games” like Chess or Go, one of the Masterworks like the 9th Symphony or the Ulysses, the Magic Flute, Guernica, the Sistine Chapel, Hamlet, Faust, 2001: A Space Odysee that are considered a cultural heritage of mankind.