The art of injecting emotion into The Sims 4

Could you explain what you mean by having "emotions" in the game?

Vaughan: I'd say it's a bit bigger than just emotions. I think our focus in this iteration of The Sims is the Sims themselves. So not only do they now surface emotions in all new ways, but they have really deep personalities. And as we've been developing it and building out the content of the game over the last couple of years, we've noticed that it's really changing the way we're playing the game. A lot of the people here on the dev team have been on The Sims team since the first Sims game, and we've seen that as we've really increased the depth and power of Sims' traits in addition, and combined that with what we're doing with their emotions, it's bringing them to life in a way that feels really different. It's something that, quite honestly, we've been challenged to talk about, because it's something that is really obvious when you get into the game, but it's been really interesting. So as a concrete example of what we're building: as we have done in the past, they have traits, but they're much more powerful now. They surface all new interactions, and one of the big changes is that we have a whole category of interactions that are tied directly to those traits. So Sims that have particular traits are going to be the only people who can do certain interactions. And then you combine that with the Sims' emotional states, and having those emotional states surface interactions and socializations in different options that are all unique to the way that Sim is feeling, we've really created a brand new way to play the game. So your Sim's personality, who they are and how they're feeling is really coming together in a way that's helping you as a player drive the story. We know a lot of people who play the Sims games are story-tellers, and the depth to that personality is really coming to life in a way that, quite frankly, we didn't expect. It's been a lot of fun.

You were just saying that it's been difficult to describe exactly what it is that you're doing with The Sims 4 without letting people just play it. To be honest I watched the original announcement video, and I didn't 100 percent get what it is that you're trying to do with "emotions" that's different to previous games. How do you tackle getting your message across properly?

Vaughan: The best way is to show people the game, and show people what's happening in there. We have a really special demo planned for E3, and we will of course be releasing a lot more content about Live Mode and talking about it a lot more over the next few months. 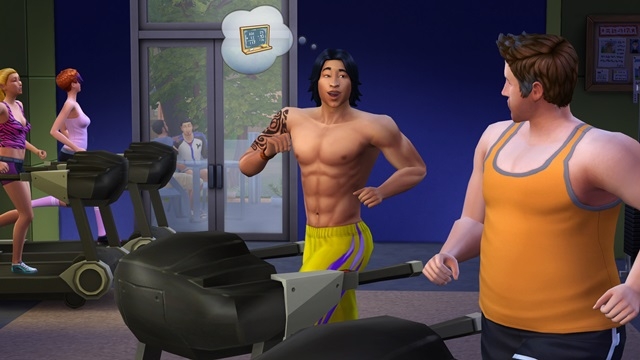 But to give you another example of how we see this system working in the game right now: If you have two Sims, one of them is a lazy Sim, and the other is a Sim that loves to clean. These are two traits in Sims 4. You set them up together, and you have them both the same kitchen counter together. As they're cleaning you clearly see in their facial expressions how the Sim who loves to clean is getting happier. Not only are you seeing a change in their UI presentation, but the Sim is actually feeling happy, and it will change the way they walk, the way they move, and it's giving you a different set of interactions that's available for that Sim. The other Sim who is lazy is starting to get angry and tense, because they don't like cleaning. The Sim is being driven into a state where they're feeling really tense. Now you see it on their bodies, see it in the way they walk, see the way they carry themself. They have a different set of interactions from the other Sim. So the stories you can tell with the two different Sims are opposed, you've pushed them into two distinct states, and where you go with that is really unique to who that Sim is because how those traits are combining, and how that emotional state is affecting those Sims - it gives you as a player a lot more control over your story, because you're getting a whole variety of new interactions and content to express who that Sim is and how they're feeling.

So you'll be able to play the game as per usual, but also more easily experiment with different types of situations between Sims?

Vaughan: Absolutely. And I think it's really key to understand that our playerbase plays the game in very distinct and different ways. We have the people that love telling stories, the people try to complete all the challenges and get to the top of the skills and careers. Then there's the people who just love to build stuff. There's a variety of different ways to play the game, and one of the things that I really like about our new Sims when it comes to their personalities and emotions, is it not only really gives a story-teller brand new ways to tell a story, but for the people who like to challenge themselves and max out the game, there's all-new ways to leverage these emotions and traits. So if you pushed a Sim to get really angry, maybe you've got him into a fight and now they're angry - you can then take them to the gym, and that Sim is going to work out harder, and build their athletic skill faster, because they're channelling that rage into their workout. You as the player have the ability to leverage not only who your Sim is, but how they're feeling, to achieve different things in the game.

How do you build more believable AI while making sure the core concept stays entertaining? Isn't it tricky to keep The Sims fun while also building more in-depth AI and emotions for the characters?

Vaughan: I almost have to disagree with you on that - I think the more believable the simulation becomes, the more entertaining it actually is. One of the things that I am enjoying as we finish up the game here, is just sometimes sitting back and Sim-watching. Going out into the neighborhoods and just watching what's going on. These Sims have so much personality now, it's almost more intriguing to go out into the world and see what's going on. You see Sims that are walking around with slumped shoulders, carrying their head in their hands because they've just had something terrible happen to them. Maybe they go divorced or go into a fight with a loved one. Maybe down the road you see another Sim, a dad playing with his son and he's going crazy, wild eyes, playing on the jungle gym and having a great time. Actually, as we were running through our E3 demo yesterday, we were out in one of the parks, and a woman in a wedding dress was walking through the middle of the park, completely angry. She had her fists clenched and she was stomping her feet as she walked. It looked like she'd maybe been left at the altar. I think as these Sims get deeper personalities, it's bringing them to life in a way that's not only just more captivating, but I really do feel like it's more entertaining, because they're really more relateable. They have these experiences and they express themselves in ways that we connect to more.
Get daily news, dev blogs, and stories from Game Developer straight to your inbox
Subscribe