The Arbitrary or Authored Loss of Control against Perfect & Natural Avatars

When you play a game, who are you? Can you be your character, or are you doomed to be a strange outside force simply guiding a character who is painfully Not You?
Droqen is who I am
Blogger
June 04, 2013 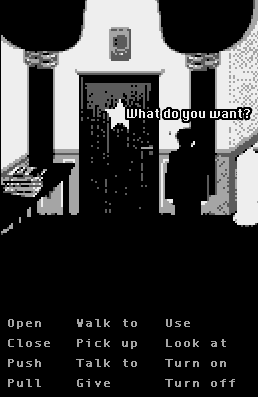 Are you your character's mind controlling his every move or just a strange choice-making entity? He is 'your' character only when the creator gives up her power over him -- over you. Are you in control?

For a moment, let's consider the old style of graphical adventure game (one example pictured to the right) in which you have a very clearly presented set of verbs (plus some extra ones, not pictured: 'Use X item from inventory') to be applied to the world. You do not have perfect control. If you attempt to 'Talk to' anything, you are not choosing what is said: only giving no, your character's creator the green light to go ahead and play the 'Character Talks to Thing' scenario.

OPEN DOOR: You didn't want to kick the door down violently (and you certainly didn't expect that). You wanted to open it quietly.
TALK TO RIVAL: You wanted to talk to your rival in a peaceful way, but your character (too prideful) insulted her instead.
USE KNIFE ON FRUIT: You wanted to cut the orange in half with your knife, not peel it!

Any sort of arbitrary choice that your character makes for you detracts from your sense of self in a game world. Please keep in mind that this is not always a bad thing. For every action a character takes on her own, she defines herself (or if you want to think about it too hard, her creator defines her). This is sometimes what you want -- especially if it's important that a player take a certain role in a certain story.

However, if an entity acts only when and how you choose...
That entity becomes your avatar, through whom you experience the world.

I think you'll agree: we are both human beings. You and I have almost certainly grown up inhabiting our bodies and we have grown used to being able to exercise a certain amount of physical control over our environment through our bodies. In Real Life, there are a finite number of physical actions you are capable of and which you can perform at any time (and when you can't, it's often strange, even disturbing). It's only natural that when you want to do something, your avatar (whatever form it takes) responds without its own thought. This, of course, means that you will never have perfect and natural control over such vague commands as 'Talk to' or 'Use'.

Okay, so we might start to disagree here but let's start with the easy part. In GAME 2, you are Alex and Alex is you. Alex is your avatar, your body. The lever and the door 'chose' how to react to your actions, but they are not part of Alex and cannot dilute his or her avatar-ness. They are external.

In GAME 1, Alex is not a perfect fit -- and is not your avatar. Before the lever and door react to your actions, your character reacts to your actions. Alex cannot be your avatar because he or she makes decisions (fairly major ones when you think about it -- Alex could have knocked on the door, or tried to bash it in or pick the lock, or done any number of things almost all of which would not have been quite what you intended) in response to your decisions. This brings us back to the burning question:

I'm not saying that it's always wrong to author some or even most of a player's character's actions (but I have a little bias as made too clear by the naming of this post) -- and I'm certainly not saying that granting a player perfect control over a character is always the right decision. It is, however, the natural state: if you make a very simple demo of a character who can walk around, maybe jump, you are providing a 'perfect & natural avatar'. On the other hand, directly involving the player in dialogue is pretty much impossible if you cling to this ideal, and so is telling a singular story.

I don't think I have anything else to say. Leave a comment below!

[EDIT] Oh, wait! Here are some pretty random examples of neat actions that adhere to 'perfect & natural' control:
* Movement and jumping in almost every game
* Shooting a gun in most games where you shoot guns
* The kick button in Radiata Stories
* Journey (flying, singing)

The article which follows this one, Whyproof to 5,000 feet, takes on the bigger problem of which this is only a part.