The support champion Taric got a big update in League of Legends, so I took him for a test drive to see how his updates reflect design trends with characters who don't go in for the kill.
Bryant Francis
Senior Editor
April 22, 2016

This week, Riot updated the support champion Taric, one of League of Legends' oldest champions. Despite various patches, updates, and tweaks over the years, players and Rioters alike recognized he was still rooted in the patterns and behaviors of his original design, and thus, wasn’t seeing much play in the modern metagame. With his model and backstory also being out of date, Riot aptly scheduled him for a full rework, the kind they recently applied to Sion, Poppy, Gangplank, and more.

One of the most interesting design elements of the MOBA franchise has been the rise and prominence of the support class—a group of characters with key roles to play in team-based combat, but who generally don’t deal high amounts of damage. It’s a concept more familiar to RPGs then PvP games, but this role still differentiates itself by not primarily being a healer role. While healers in MMOs or single-player RPGs do their best to sustain a party of characters, supports are often champions built with key spatial manipulation mechanics in mind that can rewrite the ebb and flow of a match or teamfight.

Taric’s update is a good opportunity to examine what makes being a non-combat player in a combat heavy game “fun,” and why League benefits from making these characters avoid the ‘healer’ trope and giving them opportunities to take the same risky chances as their damage-dealing counterparts.

Taric was a tank-type support, whose abilities gave him and his team a passive armor boost, a heal that would restore health to him and a teammate, a stun that was guarunteed to fire so long as you targeted an enemy player in range, and two local area-of-effect spells that did extra damage to enemies surrounding Taric.

This means Taric’s role was to get tankier, try to absorb as much enemy fire, and make risk/reward assessments on starting a fight with his stun or using his armor break spell to deal damage in a fight. Not a bad batch of skills when viewed on their own. But due to League’s natural growth over time, these abilities just didn’t have a lot of comparative advantages to other champions, and sometimes just plain felt less exciting to use.

Also previously he was just—a “gem knight” with not much anchoring to other League characters. He just liked shiny rocks and quoted Jem and the Holograms. Even with the introduction of other celestial-ish creatures, his visual profile could kind of look like a bulky mishmash.

The fundamental breaking point, according to Riot, was that Taric’s current stun just made it hard to give him power or interesting abilities anywhere else. Many characters in League have stun abilities, but their use over time has grown to represent when players decide to start or stall a fight, and as such many of them exist as what are called “skill shots,” meaning players have to aim and fire the spell properly in order to land the stun.

Taric’s stun wasn’t aimed, it just fired off with a guarunteed hit. One of Ryze’s spells and Teemo’s blinding dart still perform this way, but they still leave the squishier mage types exposed as they get into range to fire them. Taric, before, could walk up, say “it’s time to fight now,” and lock a champion down pretty effectively. (Ryze himself saw a champion update which turned one of his spells from 'guarunteed hit' into a skill shot as well)

Compared to popular support champions like Thresh and Blitzcrank, whose stun/lockdown abilities pull enemy champions toward the other side of the field, this stun wasn’t as useful as their skillshot abilities, which invited a more satisfying risk/reward.

Taric’s new changes then, manage to keep some of his old behaviors intact (boosting tankiness in order to block shots, heal, and stun), while adding more opportunities for players to take risks and weigh cost/reward opportunities.

Many of his abilities anchor off of his new ability Bastion, which tags another player (usually the marksman in lane with Taric) for his spells to deploy off of. So his new heal, his new stun, and his new ultimate ability, all deploy off the other character as well as him.

Taric's backstory and model also are now anchored to the setting of Mount Targon, a mythical peak in League of Legends where heroic or villainous characters ascend for encounters with celestial and primordial beings.

To go back to the stun, which was previously considered so strong, this new one gets a lot more flexibility thanks to the potential for failure. This opens the designers up to allow it more potential impact, meaning Taric can use his and his teammate’s position to lock down multiple enemies, if they play their cards right.

At the same time, not having to orbit his marksman TOO closely means Taric can give himself a separate identity from tanks like Braum (a literal walking meat shield) or the long-lasting Tahm Kench. He still locks down enemies where they stand instead of roping them in like Blitzcrank or Thresh, and gets to take chances on when he should fire his invincibility-inducing ultimate and his stacking heal.

The result, given some playthroughs I experimented last night, is definitely a more risk/reward based support experience, and still leaves the champion with clear weaknesses—if he and his marksman are overextended, he still only has one major chance to get them both out alive in the event of an ambush.

So what does this say about supports? 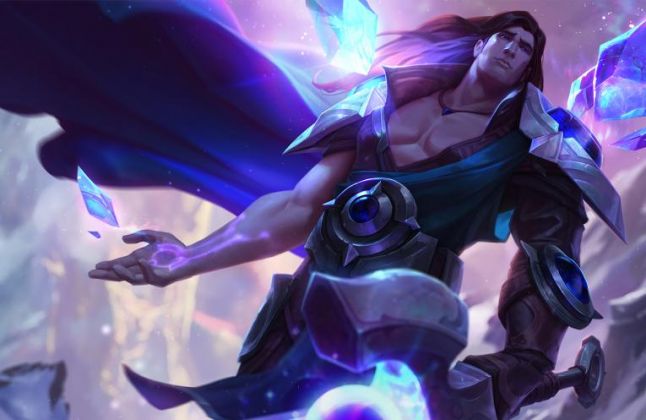 The Taric rework is a strong defense against one of the biggest challenges for many pvp games—that non-combat classes aren’t as fun, and are inherently underplayed. His rework probably won’t drive more players to try support, but for developers thinking about how to introduce non-combat mechanics or class roles in their games, it’s a strong example of the basic tenants that encourage players to look for assists instead of skills.

Supports, as a role, are looking for the same risk/reward opportunities of combat classes, they’re just looking for a different kind of satisfaction, one that factors in with players on other teams. A good play from a support can start or stop a teamfight in a way that benefits your allies, and the devious nature of certain supports (like Thresh or Blitzcrank) can add comic or surprise value that puts your opponents off kilter.

The way League has handled its supports, from building new ones to reworking old ones, helps give a broader range of psychic possibilities then just playing to the nurturing sensibilities of traditional healers. It’ll definitely be interesting to see if this becomes a character design template that will influence future RPG design or the upcoming spread of hero shooters.

(If you're playing League, and need a support, be sure to find me in the Rift as ThatRoninGuy, or follow me on Twitter @RBryant2012!)