Aki Maita's 1996 Tamagatchi was the first virtual pet to have an internal clock. Flash-forward to today, and periodic gameplay is a bane of social gaming. How can this mechanic be used for good instead of evil?
Rosstin Murphy
Blogger
June 13, 2013

FarmVille is a game about periodic, repetive action, grinding slowly over the course of days and weeks to a minor goal. When you get tired of grinding, you can spam your friends to get rewards faster. And eventually, when you get sick of that, you'll pay to get where you need to be. Is this really fun? Well, it's "fun pain", as Roger Dickey of Zynga puts it.

Why do this to gamers? It's a lucrative strategy. From 2009-2012, Zynga was a supergiant of social gaming, experiencing high growth and huge success, with millions of daily active users. Regardless of Zynga's eventual fate, for those years they were king. Let's get something straight; I'm not here to demonize Zynga. They capitalize on an evil mechanic, but it's our job as game designers to create something both better and more lucrative than "fun pain". With the current trend towards Freemium mobile apps and in-app purchases, this is a significant challenge, but I think we're up to it. I'm here to tell you that in the long run, creating games that add value to people's lives is a better strategy than getting them addicted to fun pain.

I'll leave it to this article to explain exactly how Zynga's strategy works. I'm just here to figure out where this all started. Zynga didn't make this mess. FarmVille (2009) was a clone of Chinese developer Ellison Gao's "Happy Farm" (2008), which in turn was a clone of a Russian farming game. Going further back in time, World of Warcraft (2004) is often cited as one of the originators of the addiction model, for creating a "rested XP" system that encouraged players to log in every day to reap the rewards of boosted experience points. However, I think that periodic gameplay is much older than that. 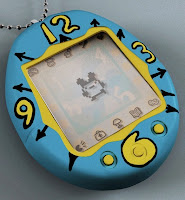 Tamagotchi is responsible for the periodic attention mechanic that "social gaming" is now known for. In order to keep your Tamagotchi alive, you had to check on it about once an hour. You pull it out of your pocket, feed it, play with it, clean up after it, and then that's it. Nothing left to do after a couple minutes. You put it back in your pocket and wait for it to need you again. The more periodic attention you gave it, the better a final form it would achieve. Treat your Tamagotchi well, and you were rewarded with the cute and well-behaved Mametchi. Treat it poorly, and you were punished with the odious and short-lived Tarakotchi. You couldn't pause the original Tamagotchi. It was a commitment. Tamagotchi could live anywhere from a month to years, and if it died early you knew it was your fault. 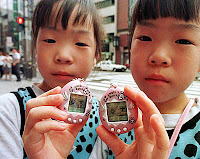 If Tamagotchi and FarmVille have the same core mechanic, why do I still get a warm fuzzy feeling when I remember my Tamagotchi, but an oily prickling when I think about my days playing FarmVille? I think it has to do with the intent of the creators, and why and how they used the time mechanic. Tamagotchi's real-time mechanic was designed not as a way to support in-app purchases and frustrate gamers, but to create a feeling of connection with a virtual creature. "I think it's very important for humans to find joy caring for something" said Aki Maita of her creation. Maita didn't just spout this truism, she designed and playtested for it. She spent weeks observing how high-school girls used her Tamagotchi prototypes, and used the feedback to optimize her pets for emotional attachment. Compare to the philosophy of Marc Pinkus, CEO of Zynga: "I don't want innovation. You're not smarter than your competitor. Just copy what they do and do it until you get their numbers." 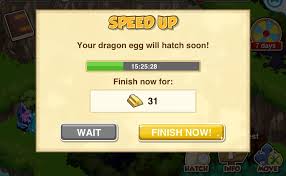 You can see the difference in intent in the way the time mechanic is handled. Tamagatchi is a living, feeling creature. When it needs to sleep, it sleeps. When it's hungry, it whines at you. You can't pay gems or gold to force it to stop being hungry. Compare to the more recent Dragon Story by Storm8-- if it's taking too long for an egg to hatch, you can pay gold to make it happen instantly. Rather than simulating a biological need, the game is transparently making you wait in order to bait you into paying. Periodic events aren't a mechanic for you, the gamer, they're a mechanic for the company to get you to pay them. The fact that it's possible to pay a dollar to bypass waiting demonstrates how badly this mechanic is being abused. Waiting should be used as a mechanic to foster anticipation and surprise, not as a money grab.

I think that if creators keep in-mind the emotions and feelings they intend to instill in their audiences, and design their game mechanics around those rather than money, they will create happier games that enrich instead of detract from people's lives. In the long term, success, fame, and money will come to those designers who seek to add value to players, rather than go for quick cash and addiction. Periodic gameplay is being derided as "skinner box" gameplay, but it doesn't have to be that way. Social games and social mechanics don't have to be evil. They can be used to give busy people fun, interesting toys that grow, change, and surprise them, to create virtual worlds that live and develop even when they aren't playing. As game developers and designers, it's our duty to create those worlds.


Rosstin is an indie game producer who loves virtual pets. Check out his latest game, King's Ascent, on Facebook!
Get daily news, dev blogs, and stories from Game Developer straight to your inbox
Subscribe