"Embarrassingly, we didn't know anything about crowdfunding when we started our previous campaign," Hidetaka "Swery" Suehiro tells Gamasutra. "So we made a lot of changes."
Chris Kerr
News Editor
May 01, 2018

For Hidetaka “Swery” Suehiro, the offbeat game developer with a sunny disposition, life is good.

He's full of ideas, energy, and positivity about the games industry, which can be one of the most fickle beasts you'll ever tangle with. But that hasn't soured his resolve one bit, as he strives to make games that he feels good about creating. That's why he's back for another round of crowdfunding tango with his latest project, The Good Life, which is now seeking funding via Kickstarter.

The Good Life is a combination of photography simulator (a la Pokemon Snap), small-town role-playing game, and murder mystery -- coupled with quirky artwork and village inhabitants that would turn into cats or dogs at night. It was originally launched on crowdfunding platform Fig in September 2017 with a lofty goal of $1.5 million, which didn't exactly go as planned.

While a good number of Swery fans still coasting off of their time with 2014's D4: Dark Dreams Don't Die and 2010's Deadly Premonition were excited to meet protagonist Naomi and investigate her "debt payback" experience, the Fig campaign was a failure. In the end, it only attracted $682,864 of its proposed funding goal. The plug was eventually pulled, and Swery’s studio White Owls, Inc. received none of the funds raised via the campaign. For the moment, it seemed as though The Good Life might fall off the map for good.

That's not how things played out, however. Never one to be discouraged, Swery stepped back from the failed campaign and took a hard look at his approach before relaunching The Good Life via Kickstarter campaign. Everything, including the early prototype images of the game, parts of its premise, and even its Kickstarter funding campaign received an in-depth revamp.

This time, Swery and White Owls downsized the funding requirements to $623,628, close to the amount originally raised via Fig. It would be a crushing blow to anyone to be forced to come back for a second round at snapping up the funds needed to bring a new project to life, but Swery didn't simply regroup and throw everything back online. He came back smarter, stronger, and with a new approach. With an all-or-nothing Kickstarter campaign on the line, how did he and his team at White Owls learn from the first failed Fig attempt and what changed since we first heard about The Good Life?

"You always need to present a complete form, and when exchanging ideas with your supporters, you need to be careful not to listen to every single order you get."

"Embarrassingly, we didn't know anything about crowdfunding when we started our previous campaign, so we made a lot of changes," Swery admitted. The studio turned an eye outward to collaborate with "several partners" who have been supporting them in a variety of ways, in terms of PR, localization, and creating a Collector's Edition. “We believe that these partnerships will make our supporters feel more at ease and eager to participate in the campaign,” he added. The process was a bit confusing and daunting as a whole, Swery lamented, especially when it comes to the more minute details.

“Gathering funds the normal way (as a professional) and gathering funds through crowdfunding are two completely different things," he said. "You always need to present a complete form, and when exchanging ideas with your supporters, you need to be careful not to listen to every single order you get. A lot of it is stuff that's hard to understand until you actually experience it.”

There's a certain degree of ignorance one must always claim when setting out to earn money to the tune of over a million dollars, especially if it's your first go-around with a crowdfunding service, to be sure. It's a new and terrifying frontier for many, especially when you put your entire project on the line and think about calling it quits should you fail. 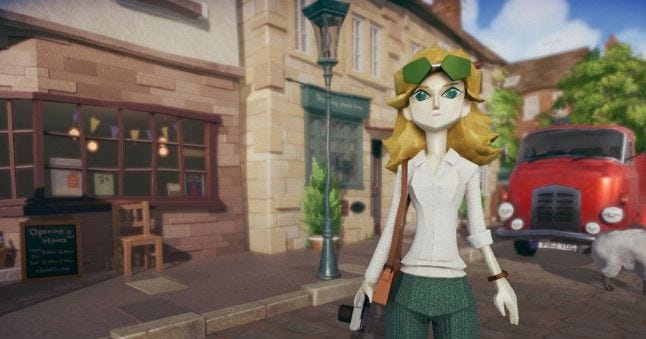 The smart changes made to The Good Life in general, however, have given it the boost it needed to forge ahead into a new world where it may indeed reach its improved funding goal. It's attracted fans in a much more expedient manner thus far, which can be attributed in part to a more open and informative Kickstarter in general. It's clear that attempts have been made from start to finish to ensure potential backers are more informed in general about what the game’s actually about.

"This was a first for me in my 22 years of creating games, and I really learned a lot."

"In our previous campaign, we prepared a lot of images based around concept art, but this caused a lot of people to misunderstand, thinking The Good Life was going to be a 2D game, or even a mobile game," said Swery. "Normally, when introducing a concept to a corporation, concept art is enough, but we learned that you need more than that when gathering funds through a crowdfunding campaign. This was a first for me in my 22 years of creating games, and I really learned a lot."

With a limited amount of time left in the Kickstarter campaign, however, it remains to be seen if the game will reach the numbers it needs this time around to succeed. When asked about the realities behind failing a second time, Swery was somewhat reticent.

"All I can say is that we're confident that this game is going to be fun, so we want to deliver it to everyone no matter what it takes," he responded when asked if it could be possible to split the game up into bite-sized chunks a la D4: Dark Dreams Don't Die to make funding somewhat simpler.

"It's hard to think about that now..." he told Gamasutra. "First we need to make our goal, so I want to keep speeding forward so that we can start our new life in Rainy Woods with everyone! So, please support us. Even $1 helps. If money is a problem, all you need to do is help us spread the word. Please, lend us your power! Help us send the world's most bizarre debt repayment RPG out in the world!"