Developers of Grow Home, Mushroom 11, and Prune, explain how using procedural character movement can create a more organic and responsive feel--if you're willing to cede a bit of control.
Christian Nutt
Blogger
May 13, 2016

Procedural generation is hot these days. The ability to offload some of the burden of content creation onto an algorithm is an attractive prospect, especially when it can produce results that are surprising and exciting for developers and players alike.

But so far, the discussion around procedurally generated content has been almost entirely focused on content that, by the time the player comes along, is a static entity. Procedural generation of levels, items, maybe even characters or flavor text. basically, things that the player interacts with.

Rarely do we talk about how it can be used to generate how players interact with the gameworld.

Gamasutra spoke to three developers who are doing interesting work with procedural character movement. They offered interesting insights on the challenges and appeal of this method.

Ubisoft Reflections’ Grow Home stars a robot, BUD, whose movements employ procedural animation. They player steers BUD around, but the way his feet strike the ground and his limbs flop around is generated on the fly, not via a limited number of preplanned animation loops.

This sort of procedural movement is quite different than what a game like Binding of Isaac or Spelunky is doing with procedural level generation.

“Procedural level generation takes complex and often quite structured rule-sets and creates an engaging and interesting environment to explore,” explains Andy Buck, the senior programmer on Grow Home. “Procedural movement, on the other hand, takes a series of dynamic mathematical systems and physical laws along with the intentions of the player expressed through the gamepad, and aims to create believable character motion in real-time.

"One relies on game and level design, and the other aims to create an enjoyable and engaging character control experience.” 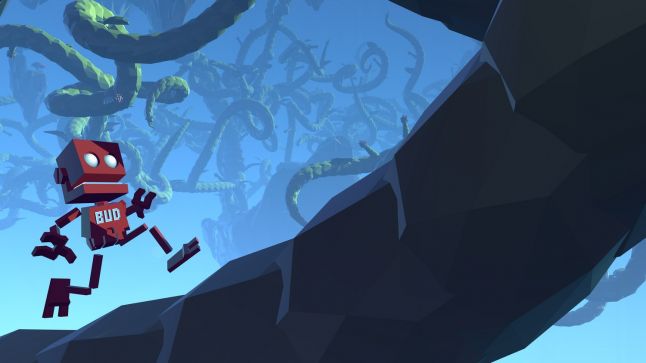 Procedural character movement may require you to rethink the layout of your game world.

Of course, going procedural doesn't mean entrusting all of the work of game design to an algorithm. For procedurally generated levels, the developer must add constraints to ensure that nothing thta is created is obtuse or unsolvable. With procedural movement, that problem is reversed. When you remove the tight control on how the character moves or traverses, the levels need to be adapted to the potential character movements.

“We had to change the mind-set of our design process.” Buck continues. “Thinking more about open-ended problems, as opposed to one-solution puzzles. Allowing the player to overcome a challenge by doing something they might feel is an exploit or unconventional approach certainly plays into this. Players should be thinking how they can overcome a problem or obstacle, not how they think the designer has created it to be solved.”

This is something that Itay Keren, creative director on Mushroom 11, agrees with. Mushroom 11 is a game in which the character is a blob whose shape is determined from moment to moment by nudges from the player's cursor, and the shape of the blob's surroundings.

Keren says that the missions in the game are carefully designed to accommodate the malleable nature of the character. “In most cases, the challenges themselves are predetermined to form the logical and skill puzzles, while leaving enough room for self-expression using the procedural nature of the mushroom itself," he says. "The mushroom, combined with the environment, produces plenty of unpredictable and interesting behaviors.”

The idea of surrendering some of the precise control of actual movement and traversal of the world to procedural systems feels like sacrilege when you first entertain the idea. That's especially true in platforming games, which both Grow Home and Mushroom 11 are. The entire game experience hinges on how movement works.

The trade-off, then, is releasing the tight control to open up the possibility space. “Procedural movement gives us complete access to every possible location within the game world,” Buck continues. “And absolute flexibility to explore how we traverse that world without having to consider the costs of creating animations. If we want to consider how different step lengths of jump heights might look, we just change a single value, instead of asking an animator to go to the effort of animating it all for us each time. It basically shrinks hours or days of work into seconds.”

This efficiently iterative approach worked well for Joel McDonald, creator of Prune, helping him create distinct tones and moods for the different areas of his horticultural puzzler. “For example, to evoke a lack of control and sense of intrigue in the underground section of Prune, I used my tuning knobs to create a meandering, vine-like tree that slowly unfurls its branches as it crawls towards the light.

However, when I ask McDonald what he finds attractive about the prospect of using procedural movement, the efficiency isn’t what he cites. “I think it’s simply new and different,"he says. "Also I think it forces you to be conscious about how you move."

McDonald says he really enjoys occasionally having to actually think about how to move around a space and not simply press a button. "Track & Field was one of the first games I can remember playing that hinted in this direction;: he adds. "More recently, Bennet Foddy’s games are definitely known for this--most notably QWO.,My theory is that ‘procedural movement games’ tend to work in the same fundamental way.”

Keren offers a similar sentiment. “You give up direct control over the mushroom in order to gain control over its shape," he says. "One fan called it ‘massaging a cloud’; that's my favorite description of the game. The possibilities, even before facing any challenge, are already endless. When you apply even the most basic challenges like moving around or climbing over obstacles, you notice how versatile this creature can be.”

All three developers offer variations on this concept of surprise and delight purely through the method of movement. When everything isn’t always completely precise and canned, you offer the player the opportunity to surprise both themselves and the game world with an unconventional method of locomotion. Grow Home’s BUD can cling and clamber over any surface, be it vine, rock or grass, which allows players all sorts of avenue’s to navigate their way through, and up, the world. Similarly, the mushroom in Mushroom 11 might have certain constraints, but its tenacious and unpredictable way of blooming into the same mass, just with a different shape, regularly elicits surprise and marvel.

Fundamentally, procedural movement is a messy way of letting a player navigate a space, but one that requires them to learn how their character moves, rather than just what button does what. Another good example is the brilliant Starseed Pilgrim, which, while having a conventionally controlled character, charges you with planting seeds in the world that erupt in unpredictable but not wholly unknowable ways. Managing that chaos is a large part of what makes the game challenging and surprising, but also eminently fresh.

“Take this irrational movement scheme and make it intuitive, even subconsciously.” Keren enthuses. “Use the unpredictable nature to your advantage. Almost every puzzle in Mushroom 11 has an interaction that is unique. Even elements that you’ve seen in other games, like platforms, fireballs or rockets get completely new interpretations when you can use your shape for clamping or pulling, or when you realize that destruction is not just a deadly hazard, but it can sometimes be an inevitable, useful tool.”