Orwell, nominated for Excellence in Narrative in the IGF, is a game of suspicion and guilt, giving players access to the texts, social media, bank accounts, and personal files of strangers.
Simon Carless
Blogger
January 24, 2017

Orwell is a game of suspicion and guilt, giving players access to the texts, social media, bank accounts, and personal files of average, everyday people. Except some of those people could be criminals or terrorists, and it's up to the player to go through these peoples' private digital lives, searching for information and connections that might prove their guilt.

Still, what Tweet proves someone is a bomber? What about your chat logs would indicate you were a potential terrorist? How do you know someone is a criminal from their dating profile? Orwell asks players to think about what indicates guilt to them, and whether their own prejudices and thoughts muddle the line between guilt and innocence.

This tale of difficult moral decisions in an age of digital spying earned the team at Osmotic Studios an Independent Games Festival nomination for Excellence in Narrative. Gamasutra reached out to Osmotic's Melanie Taylor to learn more about the development decisions that lead to the creation of this web of online personas, and how the team left it open to the player to decide the fate of someone they only know from their online profiles.

We are a small team of three developers who met while studying game design in Hamburg, Germany. We each made games during this time -- small ones in game jams as well as our main projects, which we were working on during the course of one and a half years. Our team is: Michael, programming, Daniel, game design and writing as well as me, being responsible for the artwork and graphics. 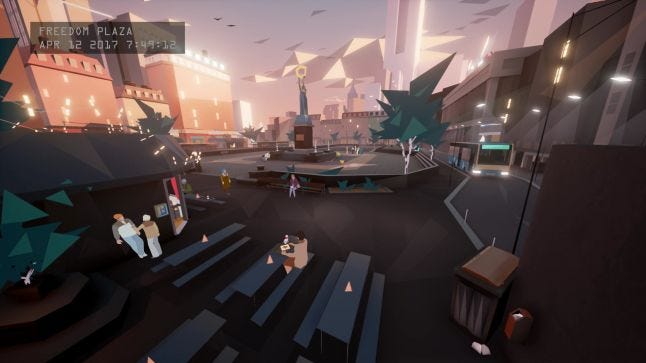 The concept for Orwell started from an idea that Daniel had in early 2014. It was a few months after the Snowden revelations and the media had been reporting a lot about security versus privacy and how the US government had secretly been surveilling private data belonging to their own citizens as well as citizens of many other countries.

The combination of this topic and the idea of making a game that was set entirely on the desktop of a computer was the starting point of the concept for Orwell. Another source of inspiration was Papers, Please by Lucas Pope, which is also about handling people's private data and making difficult moral decisions based on this.

We developed Orwell in Unity, using a plugin called Textmesh Pro. We also used a software called Articy:Draft which is good for editing large amounts of text in games and we were able to use it for our various websites, text documents, emails and instant messaging sessions.

We also used it for creating flow charts of the level design, i.e. deciding on which player decisions would trigger which events. With Articy, these can be imported directly into the game.

What drew you to create a game about creeping into people's private digital lives? What do you think draws the player into doing the same?

I guess it was partly to create a compelling relationship between the player and the characters on the one hand, and an uncomfortable feeling for the player on the other hand. We were hoping that this ambivalent relationship, combined with the objective given to the player to find the culprit of a terrorist attack, would create a moral dilemma that would be apparent whenever deciding on which datachunks to pass on to the government. 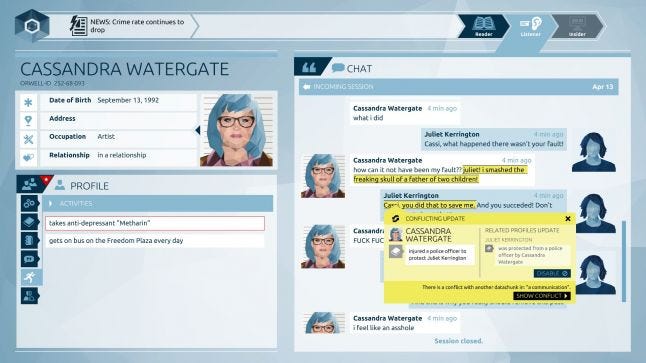 What thoughts went into creating the information players would be digging through? How did you create information, pages, and chats that would be intriguing, incriminating, and personal?

Most of the information the player digs through while playing Orwell is personal data related to particular characters, even if it is from a more public source, for example regular websites. This creates different aspects to the characters and gives them many different avatars and aliases that the player pieces together in order to get a bigger picture of the daily struggles, ambitions and hardships facing the "targets" he investigates.

Since having different parts of one's own personality scattered all over the internet is quite normal in modern society, it is something that many people can relate to, and we used all kinds of social network platforms that are common in order to build the characters' personalities and tell their stories, such as job portals, online dating websites or even private online bank accounts.

One could say that there are different levels of privacy (i.e. character depth) that the player encounters: The first is public websites and posts from social networks, which show how the character wants others to see them. Then we have more private information, which the characters had only intended for certain people to obtain, such as chats from instant messaging sessions or private conversations on social networks and phone calls. These show how the characters interact and behave towards people from their direct environment and gives a bit more insight into their personalities.

This can become interesting if they post something that was clearly written in the heat of the moment on a public social network and then on the other hand admit to one of their close friends that they regret having done this. The third level of privacy consists of private documents that the characters have not intended for anyone to see, such as private text documents or even metadata, like browser history, which is in fact not too far away from looking into somebody's thoughts. We often think one thing and then immediately type it into a search engine.

What challenges did you face in leaving it up to the player to decide what was a sign of guilt? In creating a game where the player decides what determines guilt or innocence?

Signs of innocence and guilt can be very subjective. It is not easy to try to create compassion on the one hand and make a character edgy, believable and interesting on the other. One rather difficult aspect was showing the player that information is always ambivalent and that contradictory information can sometimes not clearly be determined as correct or false, without frustrating the player.

I think that we have in fact frustrated many players. But, lucky for us, many of them also seem to have recognized that this is part of the point that the game intends to make and why judging people by their online data can be very dangerous.

We wanted the player to get emotionally involved with the characters and we especially didn't want to make it easy for them to decide which data to pass on to the government and which to intentionally hide from them. This is difficult, because you tell the players to do one thing and give them a "mission", but actually want them to do something else, or at least make a conscious decision between the two.

We actually wanted the player to feel bad about certain decisions. We wanted to give them this creepy feeling that you might have when casually browsing through the data on a phone of a friend or spouse and then suddenly finding something that you were never supposed to see. But we also wanted players to make up their own minds about what they feel is right or wrong instead of pushing them in certain directions. 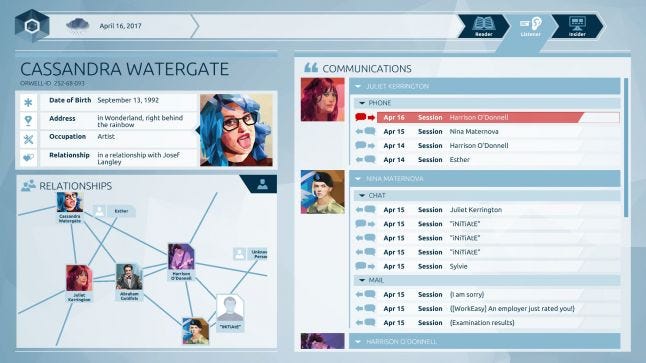 Yes, there are so many great games and we are super excited to be nominated next to so many wonderful developers. For me personally: I absolutely love Inside. This is by far my favorite game of last year and definitely among the top list of all-time favorites.

Overcooked is also a personal favorite: An awesome multiplayer coop game which can make people either bond more or start hating each other. I am also a big fan of David O'Reilly and very much looking forward to playing Everything.

I think there are lots of opportunities for indie devs. We are getting more and more options to create games with cheaper or even free tools, sell our games in online stores, connect, network, and partner up with other developers and publishers.

In spite of this, one of the biggest hurdles is probably still funding a game. It is very difficult, especially since games usually require several years of development in which the creators might not be able to earn any money. So, it is necessary to invest a lot beforehand without knowing whether the game will ever do well enough to return this investment.

The market itself getting more and more diverse and open also has its upsides and downside. On the one hand, this is really awesome for developers and gamers, since we raise the general bar for what people expect of games and we are finally leaving established genres and mechanics behind and making more experimental and interesting games.

On the other hand, it is harder than ever to get public attention for your game, I suppose. But we are definitely looking at the future optimistically, creating and hoping for even more awesome, interesting, unusual and experimental games.