We spoke with designer Thomas van den Berg to talk about Kingdom's origins, and the challenges of creating a procedurally-generated game.
Kris Graft
Publisher
January 20, 2016

This interview is part of our Road to the IGF series. You can find the rest of our Q&As by clicking here.

Kingdom, from indie developers Noio and Licorice, could be called one of the quiet success stories of 2015. In an era where the phrase "procedurally-generated game" conjures ideas of huge, sprawling worlds like Minecraft, Kingdom soared to the hearts of Steam players with smaller, but ultimately holistic ambitions.

If you missed Kingdom, you'd be surprised to hear it described as many other games it hardly resembles--tower defense, roguelike, exploration game--because it successfully integrates these game types into a completely two-dimensional space. That combination plus an Elysian pixel aesthetic that makes playthroughs feel slow and meditative, helped earn Kingdom an Independent Games Festival nomination for Excellence in Design.

We spoke with designer Thomas van den Berg, who operates under the Noio label, via e-mail to talk about Kingdom's origins and the challenges of creating a procedurally generated game.

I really got into making interactive things when I started programming in Flash. It has the ideal set of tools for making things both interactive and visual, from there it's a small step to making games. Throughout my student years I was making little gimmicks as a creative outlet when academic work consisted of producing lots of text. But I really didn't know I was getting into game development as a career until after the Kingdom Flash game got such good response and Marco Bancale (from Licorice) proposed to do an iOS port of Kingdom. At that time I was also making interactive installations for DROPSTUFF.nl, games on a huge LED screen with motion sensors. Things just kind of came together and made me realize that making games for a living might actually be possible. Before that I always thought I would get a job as a developer and build games in my own time.

What development tools did you use to build Kingdom?

Kingdom was made using Unity, and the art was made in PyxelEdit.

The Flash game was built as a side-project during the last years of my graduation (2012-2013). Since 2014, I worked on the desktop game full time. I've been seeing a lot of people quote hours on Reddit lately, so I'll do that too: I spent probably around 6000 hours on Kingdom now.

This game wasn't really planned out from the beginning, so most of its design was not the result of a conscious decision. I was learning pixel art animation about five years ago, which yielded the original horse animation. I added a king and this would become the seed that the game grew from. First I thought that the king needed subjects who do their own thing and interact with each other. They needed some kind of adversary to pose a challenge of course, and I wasn't very concerned about being serious, so I drew the original troll-faced noodly-armed monsters. It being an endless game in theory was a nice solution to many balancing problems, and I just tuned the curve to make sure that every player would perish at some point. 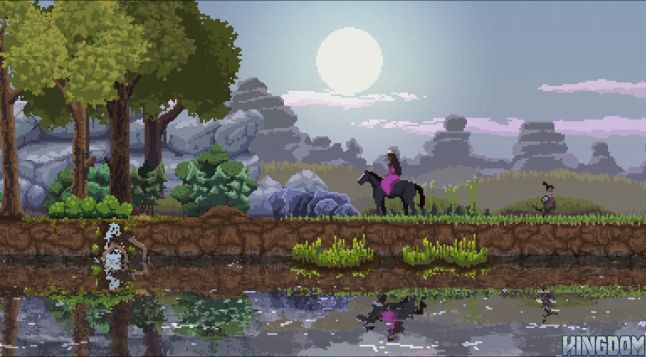 Procedural games are sometimes at the biggest risk of overscoping their boundaries--how did you keep Kingdom's design tight and focused, and what had to be pruned away?

We definitely did overscope, but many features got naturally pruned due to time pressure as we got closer to launch. On paper there was supposed to be a lot more procedural generation going on, but In the end we limited that to basically shuffling the map. During development, we did stick to a few rules, to be true to the concept of the original Flash game, and as a fun design challenge. Things like not introducing an extra button mapping besides "pay" or adding resource types besides "gold". When thinking about mechanics it can be tempting to complicate things. And we actually broke a rule because galloping is a separate button on controllers now.

What was your thought process in retrofitting mechanics typically seen in larger games to a 2D environment, to the point that tower defense, exploration, etc can all happen on essentially a straight line?

Honestly I just never thought about having anything happen on the Y axis while creating the world visually. I live in a very flat country.

This game started as a Flash game, then was showcased extensively at indie booth after indie booth---what effect did that have on your design process?

It was mostly a reassurance to see people enjoy the game! We had followed a relatively closed development process, involving only a few players. Putting the game out there and letting people play without as much as a 'back of the box' introduction was scary. We did get a few shrugs followed by a dropped controller, but those were far outnumbered by excited reactions. We ended up letting go of a few mechanics that I had been stubborn about, after seeing that those just really didn't work in the wild. 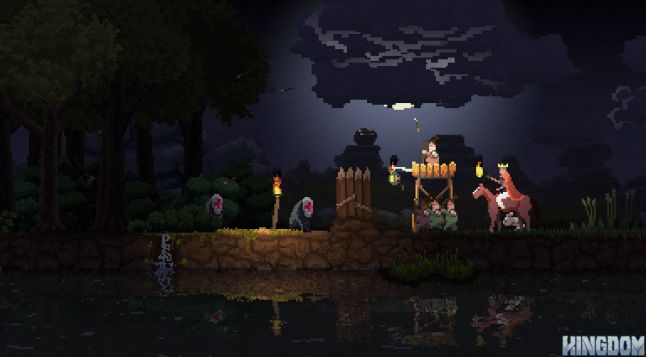 I've played many of them, but I'm trying to see them all before I go to IGF. Infinifactory and Keep Talking & Nobody Explodes are two of my favorite games at the moment, and I'm just blown away by the fact we get to be right next to them in the nominee list. I would just like to add, though, that Infinifactory is not playing fair: it's so satisfying to create things that create things—which is exactly why I like to build games—that it's taking time away from me building content for Kingdom. ;)

I really don't have anything to add to the complicated discussions about the big issues. I hope that we can keep shedding the stereotypes and make crazy new things. So far I met only great people in this "scene" and I look forward to making even more friends. I'll keep making indie games as long as it's possible for me to make stuff for an audience that I can identify with, regardless of whether it'll make me a living.