Q&A: Why Assassin's Creed Valhalla did away with side quests

Assassin's Creed Valhalla has an interesting design quirk that stands out in a sea of open-world RPGs: For the first time in the series' decade-long history, Ubisoft has jettisoned the traditional notion of sidequests.

In prior Assassin's Creed games, players will fill out their time chasing down ancient conspiracy theories with short adventures that get them involved with a colorful cast of characters. In Valhalla those adventures have been molded into a new shape: instead of being given tasks that fill up a quest log, players now meet these characters through a new system called "World Events."

Players now don't receive quests, they either encounter NPCs out in the world who simply initiate a narrative encounter, or they hear another NPC discuss a nearby event that they can wander to all on their own.

It's a big structural change for Assassin's Creed. Not only does it change the narrative structure and flavor of how NPCs respond to the player, it changes how players keep track of and manage their goals and objectives in the game world.

We wanted to know more about what informed these changes, so we reached out to Assassin's Creed Valhalla narrative director Darby McDevitt and game director Eric Baptizat for a quick chat about these changes. The pair sent back these answers together via e-mail to break down the philosophy behind World Events.

In Assassin’s Creed Valhalla, side quests have been replaced by a system of World Events. Players no longer track a series of tasks from NPCs, but rather are told about events, and then can seek them out on the map. What was the reason for this change, and what major changes did the team make to design them?

This change came from two major sources. The first was our reflection on the structure of most RPG games and the assumptions this structure makes about the character and the story. In most RPGs, the player embodies the role of a hero, usually someone who is native to the land they are exploring, and who has a positive role to play in this world – a hero, a mercenary, a sheriff, etc.

The idea of “side quests” comes naturally to such roles… the player has their main story to follow, but embedded in the role is the idea that their “job” is to help other people as well. This applies to Geralt in The Witcher, Bayek in Assassin's Creed Origins, Kassandra in Odyssey … all of these characters have a main narrative to follow, as well as a job to fulfill, as a Monster Hunter, a Sheriff, and a Mercenary respectively.

In Assassin’s Creed Valhalla, no such assumption can be made about our main character. You play as Eivor, a Viking invader in England who only wishes to settle somewhere and make alliances to ensure the prosperity of their clan. So in the eyes of the majority population in England, you are the enemy, or deeply unwelcome at the very least.

Moreover, Eivor has no intrinsic need to take on so called “side quests” – such chores are meaningless in the grand scene of their main goal. 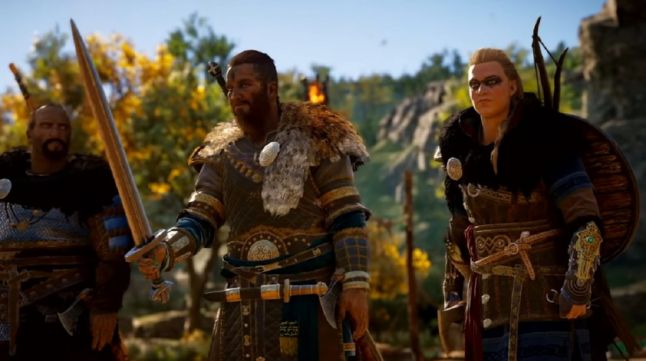 So this is where the idea of World Events came from – small little narrative moments that engage the player’s attention immediately, but are not tracked. If the player is not interested in the event, they can walk away and there will be nothing but a dot on the map to remind them that it exists.

Because we could not rely on our quest tracking tools for the World Events we had to come up with a new recipe for them, to ensure players could grasp what was going on. In general, World Events had to remain within a 200-meter radius of their origin, they had to use existing mechanics in novel ways, and they always had to present one interesting decision for the player. We also ended up leaving notes and dialog reminders in the area to help the player achieve the objective.

With world events in the pipeline, we began reflecting on the main story of the game, and it was here we took inspiration from the Icelandic Sagas, stories from the 12th century that have a very different form that the three-act heroes journey arcs we are used to in the modern age.

The Sagas were sprawling tales that typically followed the lives of many generations in a family. They were episodic in nature, like Don Quixote or The Adventures of Huckleberry Finn, and they rarely had a driving plot or through-line. Their primary function was as an exploration of characters and themes – heroism, honor, sacrifice, reputation, etc.

This structure gave us the idea to approach the main narrative in Assassin’s Creed Valhalla in a similar manner. To bolster Eivor’s desire to make a safe space for the Raven Clan, they travel to different Shires and Kingdoms in the world, seeking alliances. This model allowed us to treat every territory as a separate and self-contained story, giving the whole game a unique feeling.

It plays out more like a television series, with some stand-alone episodes and many that follow Eivor’s more personal journey with their brother Sigurd. The effect of this structure should gives players the same feeling that the Sagas of old give their readers. It’s a unique approach, I think, and fairly successful I think.

This is a pretty drastic flow change from both prior Assassin’s Creed games and open-world RPGs at large. How did players respond to these changes during playtesting? Were there any useful lessons from the testing experience about helping players find these world events?

It is a drastic change, but on the whole people were definitely engaged. The biggest criticism we got during playtesting was that the perceived “main story” – the prophecy that Eivor gets about their brother – had a slow pace in certain areas. But on the whole, this did not diminish players enjoyment of the game overall.

They appreciated the individual episodes and mentioned feeling a greater sense of satisfaction when completing each one. Having quicker resolution to multiple stories is far more interesting that dragging a single story out well past its expiration date. 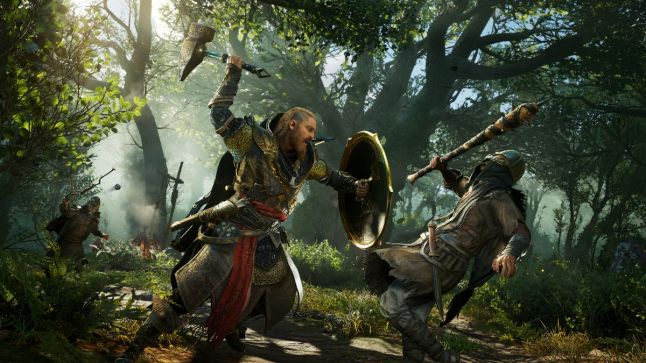 This has always struck me [McDevitt] as a major stumbling block with many video game stories – individual stories are often stretched well beyond their dramatic effectiveness. So we decided to fill our game with two dozen stories of appropriate length, all tied together with a loose thread.

I admit I was sort of thrown off after speaking with an NPC who asked for help finding her runaway guard and then not having any updates made to my quest log. I then didn’t have any sense of where the missing guard would be. Did you anticipate this kind of confusion, and did it factor into your design at all?

This was one of the rare World Events where the recipe was not followed, so we actually agree [that it's confusing]! The woman calling for the missing soldier is far away from the actual soldier. This is one place where a side-quest would have been appropriate – these were members of Eivor’s clan, so [the player] would have had an obligation to help.

Not our best example of a world event, but there are very few that break the rules like that.

What many reviewers seem to be noting about these events is that they’re exceptionally flavorful and are some of the most unique moments in Assassin’s Creed Valhalla. What was the philosophy for making sure these world events were compelling and worth pursuing?

We had a few rules for these, above and beyond what I have already mentioned. We wanted world events to be immediately engaging with a strong sense of emotion so the player would be compelled to engage. This meant that they tended to be funnier or more surreal than the territory arcs were. We also wanted them to approach gameplay in a unique way, so we always tried to use our existing gameplay mechanics in interesting ways.

In the end we wanted these World Events to be palate cleansers, something to refresh you with a laugh or a tear as you explored the world.

I noticed that one of the difficulty settings players can adjust is the exploration setting, which may make these moments more difficult to track down, and their appearance more random. What were the team’s thoughts on this part of the process, and what kind of experience were they hoping players would have if they chose this difficulty level?

It was important to us to allow players to customize their game experience and adjust it to the way they like to play a game. In the recent years we have developed an increasing number of customization options to personalize your experience, and difficulty is just one example.

Some players wanted the possibility to have a more-or-less guided experience when moving through the world, so we came up with these options for players to customize their stealth and exploration experience.

At the hardest exploration settings, the player will be guided by the environment and not by icons on the compass and the world map, this is useful for players who are looking for a more immersive experience and who want to focus on the main mission. At the opposite end, you can increase the feedback distances and keep icons always visible to guide you in the world to not miss anything.

These options came about as a result of player feedback, and they can switch between these options at anytime through the game.