Q&A: Why did Riot decide to make a tabletop game?

We talk to Chris Cantrell, producer of the tabletop game Mechs vs Minions, about why Riot Games ventured into physical games after their enormous success with League of Legends.
Alissa McAloon
Editor-in-Chief
November 01, 2016

Riot’s recent release of Mechs vs Minions was an interesting move for the studio that built League of Legends. It’s an extremely large tabletop game that makes use of League of Legends characters, and can be purchased directly from Riot online.The game is a cooperative series of campaigns in which two to four players team up and have adventures on five different game boards. (It's garnering raves from the tabletop aficionados who frequent BoardGameGeek.com.)

Mechs vs. Minions doesn’t really have any other gameplay connection to League itself. And since it’s a shift from digital publishing to physical, we felt it was worth asking—why even go in on this business at all?

To answer this question, we sat down with Riot Games' Chris Cantrell, who served as producer on Mechs vs. Minions. He took a prototype dreamed up by Rioter (and frequent GDC speaker) Stone Librande, and shepherded it through development into a successful tabletop launch.

Why did Riot get into the tabletop business after a decade of making video games?

Chris Cantrell: I guess that's how it might seem from the outside, but from the inside, I think we've always seen ourselves as just a gaming company. We're looking to create really memorable, exciting game experiences for you and your friends.

So we're taking a swing at the board game space, an area where we see a lot of tremendous growth and a lot of exciting innovations happening. I guess for us, we feel like that's where gamers are at. Maybe Mechs vs. Minions or tabletop games aren't for everybody, but we think they are really exciting experiences. 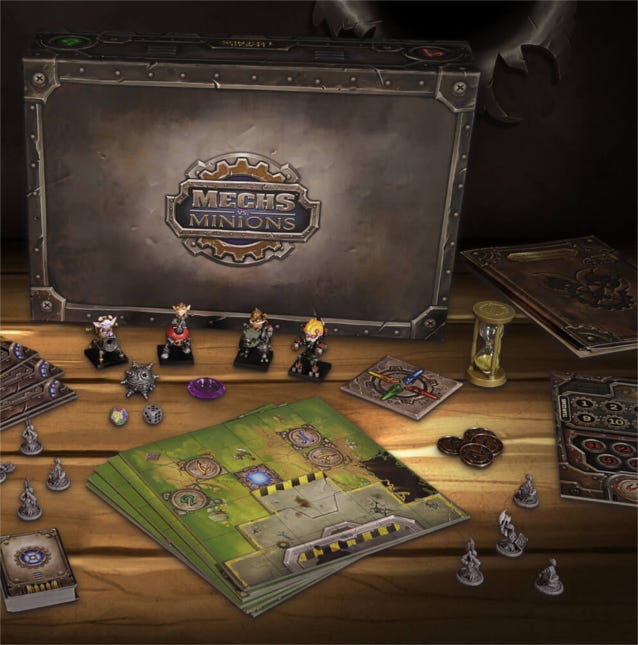 Where did the concept and the mechanics for Mechs vs. Minions come from? 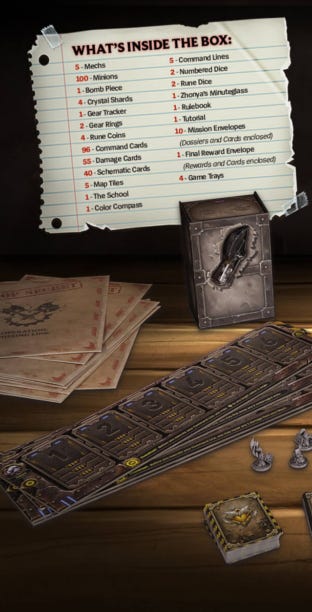 It started about three years ago we hired on a designer named Stone Librande. Stone is kind of a designer's designer. He really loves the craft of making games in so many different kinds of formats. He's been the lead designer over at Sim City and worked on Spore and the Diablo franchise. He's a very accomplished designer, but in his spare time he would make board games for his family. He's made 15 or 20 of them, every Christmas he'll break out a new one and introduce it. It's just because he loves the art of making games. When we brought him on at Riot, we got the opportunity to play one of them, and I think across the board we thought there was something very unique about it.

We took that game and we added other complexities and other layers on top of it, and spent the next two and a half years fine tuning it. But the core mechanic is still there, and that all came from Stone. It wasn't really about, "Hey, so we want to make a board game. What do we want to make?" It was really, "Wow, this is a great game. Can we find a way to get this in front of other people?"

What led to that 3-year gap between Stone’s prototype and shipping the game?

Cantrell: Well, I guess the honest answer is that we were learning as we went, figuring it out and we were figuring out what it took to make a tabletop game in Riot fashion. That took us some time. It wasn't a huge team... actually for the first year, it was basically just me, and then even at its largest, the core development team was only 5-7 people. So it wasn't like we had hundreds of people working on this for three years.

The most important thing for board game design and probably for any game design, you want to make sure you playtest it thoroughly and that you enjoy playtesting it. If you are playing a game and a month into it you're like, "Man, I'm over this." You can endure it and push through, or you can take a step back and ask, "How did this happen? Why are we not having fun with this anymore?" And then ask yourself some really hard questions, and streamline the experience or cull different systems or create new ones. It was hard work, but it was a labor of love.

What are the biggest lessons Riot’s learned moving into physical distribution?

There were a lot of learning opportunities along the way that we came across as we were going through this process. I think the biggest question, at least in my eyes, is how can we make demand. When you're dealing with a physical product -- not just a board game, but any physical product -- you're dealing with a finite number of units that you have the capability to sell.

With a video game, I guess you have a bit of that when it comes to server structure, but to it's 1s and 0s and it's a little bit more solvable to upgrade your digital tech. I can't spin up another copy of Mechs vs. Minions with a keystroke.

Riot's online FAQ for Mechs vs. Minions laments the fact that instructions for tabletop games cannot be updated on the fly.

There were a lot of other moments that happened just as far as, "What quality bar do we want to hit? What do we think represents our physical contribution to players?" A lot of that was kind of riding off the great work that's happened over in the Riot merch scene. They've blazed those trails so we're able to leverage a lot of their learnings and know-how when it comes to distribution that would have made this product very difficult if we didn't have a team like that, that was already shipping to players all over the world.

It probably would have been a lot easier if we went with a third party distributor and then went through board game stores, like your friendly local game shops. But one of the things that we wanted to do was provide a lot of value to players and in order to do that, just to make it economically feasible, we wanted to cut out the markups from both the distributor and the point of sale at game shops and pass those savings onto players to provide a high quality product at a reasonable price.

I think we knew very early on that we weren't trying to recreate League of Legends as a board game. We already have League for that.

Really, I'm personally really hesitant when it comes to IPs attached to board games. There are some great examples out there of where it works. A lot of them come from a company like Fantasy Flight that has the Star Wars license and the Lord of the Rings license and what-not. They do an amazing job, but for every one of those success stories, there are five or ten really bad conversions. It's almost like, for me as a player, it feels like the company is cashing in on their IP. That was never the approach that we wanted to take. 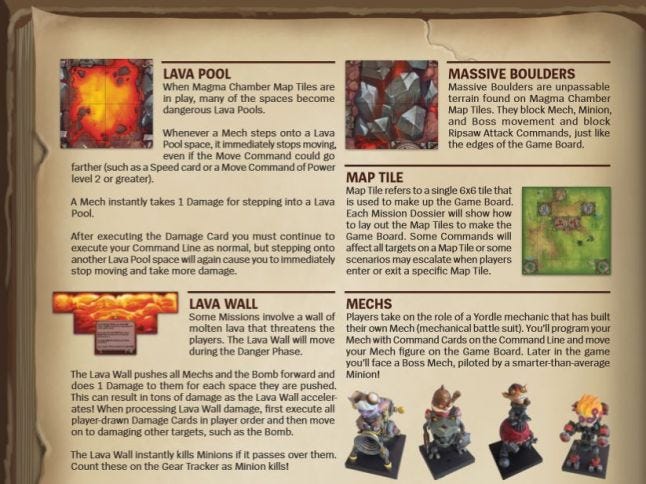 An excerpt from the Mechs vs. Minions rulebook

We spent years developing this completely in-house and making the game the way we wanted to make it and questioning some basic assumptions in the board game industry in order to launch this product. We wanted something that would be able to stand up on its own and excite players from the get-go.

We tried to make onboarding into the IP with the game fun and not critical. I don't think you have to understand League of Legends to get an appreciation for Mechs vs. Minions. But for players that do, there are a lot of Easter eggs and nods to League of Legends throughout the game. I think that's going to be really exciting for them.