Hidetaka "SWERY" Suehiro chats with Gamasutra about the development of D4, his thoughts on evoking empathy from players and how developers can make better games through "sensory replication."
Alex Wawro
Blogger
December 23, 2014

"The really hardcore DP fans, for whom DP is their life, have gotten kind of mad at me because [D4] is so different from DP," says Suehiro.

Dealing with emotional fans isn't exactly a new challenge for the idiosyncratic developer, but designing D4 to evoke a broader spectrum of emotions from its player -- for better or worse -- proved tricky enough to prompt Suehiro into pitching a GDC 2015 talk about D4 and the topic of emotional game design.

But it's not your typical postmortem; in addition to digging into nuts-and-bolts production details, the designer aims to share what he learned about "sensory replication" in games and inspiring player empathy.

Gamasutra recently spoke with Suehiro to learn more about what he learned while developing D4, and why he felt strongly enough about empathy in games to pitch a GDC talk on the topic. What follows is our conversation, conducted via translator and edited for clarity.

Tell me a bit about your GDC talk. This isn't exactly a straightforward postmortem; what inspired you to pitch it?

Hidetaka "SWERY" Suehiro: I believe that game design is something that's always changing, and there are some things that should be changed and some that shouldn't be.

I have my own thoughts on what those things are and how they should be approached, and I hope that by giving those thoughts to other developers it will help them confirm things they've been thinking about, or maybe give them a new approach, a new perspective on how to think about things. In that regard, that's why I think it's important to speak at GDC. 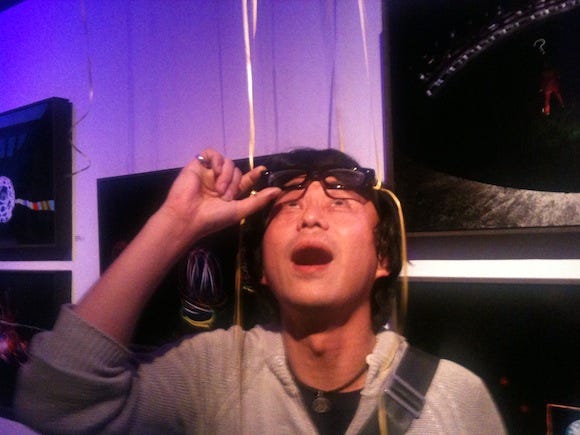 Like what? What did you specifically learn from working on D4?

One thing that I really focused on while making D4 was empathy. I think that empathy is necessary in making games, in order to give players the sort of memories they won't forget, even when they stop playing. I want to make games that are, if not as significant as life memories, as close to that as I can possibly make.

"I want to make games that are, if not as significant as life memories, as close to that as I can possibly make."

There are many methods to create empathy inside games of course, but this time the method I came across was sensory replication -- recreating senses for the player. By doing that, it allows the player not just to empathize with the characters, but to dive in and empathize with the world itself. That's the sort of thing that I really studied and learned about, that I'd like to share with fellow developers.

For me, the game is a really tiny sort of sandbox game; it's about this world that we created, and the character is just one little piece of that world. The motion controls are just another small part of that world. I don't want the discussion of D4 to just end with the motion controller; there's much more to the game's design that I was thinking about while making it.

What you're talking about reminds me of the psychological concept of mirroring. What do you think about the potential for other new types of tech, like VR, to help players empathize with characters?

I think that VR will definitely allow for a greater level of immersion in games. For me, the idea behind D4 was to create a game that could really generate a lot of empathy among players. It wasn't because of Kinect that I made D4; Kinect is just a device I used with it.

I do think developers need to challenge themselves more in terms of input devices. There's a sort of idea that goes around that says "well you know, this input device isn't very popular and not a lot of people have it, so we shouldn't use it."

I think that's kind of stupid, because if people keep thinking that way then we'll be stuck with the same kinds of controllers for decades to come. I think we should be more creative about the ways we allow players to interact with and control their games.

What sort of problems did you run into during D4's development, and how would you recommend other developers avoid them?

So a really easy example is the motion controls, and getting over the obstacle of developing for them. When people look at the motion controller, one of the first things that comes to their minds is having people do poses to match the character in the game. But when you do it that way, gradually the player gets more confident in their ability to use gestures as controls and their expectations outgrow what the game can handle. That creates a sort of imbalance; there's so many different poses the player is capable of doing, it just becomes too large to support and they get frustrated when the game doesn't interpret their gestures exactly right.

If instead you make the player's motion controls into a sort of symbolic thing by simplifying it, that allows the effect to stay significant, because the motions and the player's input remains so simple. 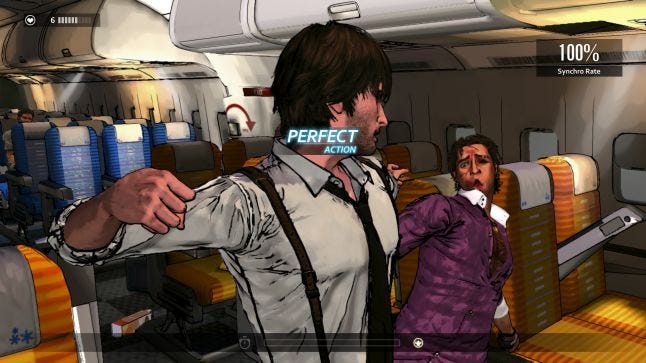 I wound up entrusting it all to one company we worked very closely with, where I could give them pointers on exactly what we wanted.

Okay, but why use cutscenes at all? Why not convey drama through gameplay?

Another obstacle to the development of D4 that I had a lot of trouble overcoming was that...well, you know, years ago I put out Deadly Premonition, and there exists a number of people who think that game was not good.

But I got some feedback from the company saying we had to put some things in this game that would become internet memes, like with DP. What would you do in that situation?

Honestly? I guess I wouldn't. I'd hate to try and intentionally make something 'go viral.'

Yes, I feel the same way. However, stuff like that would come as orders from the company. So, that was a huge obstacle during D4's development.

How did you deal with that?

Development-wise, I overcame it by rewriting the script seven times. To overcome it personally, I just kept drinking tequila and believed that what I was doing was right.

The launch of D4 seemed like a surprise to everyone at the time. Has the response been satisfying for you and your team?

I think that...from the players who just honestly go into D4 with a clear mind, I think the response has been very good.

The feedback from the marketing people has been that, regardless of what they think about the game, people who have played D4 tend to speak passionately about it in some way. But the really hardcore DP fans, for whom DP is their life, have gotten kind of mad at me because it's so different from DP.

Some of my favorite conversations about game development don't involve games at all. I'm curious: what book, film or piece of music would you recommend to fellow game makers?

Oh, I'd recommend Royal Tenenbaums. For me, the story isn't really the focus though. The main character, Gene Hackman...he's sort of a bad guy, you know? He's not a good guy. But he has this sort of charm that reels people in.

And when you're making games, if you can make a game like Gene Hackman's character -- one that has a sort of charm, regardless of its ethical worth or anything like that -- if it has that charm, it's very good.