Q&A: Designing the beautifully surreal time puzzles of The Gardens Between

Gamasutra spoke with Simon Joslin and Matt Clark about designing the surreal time-manipulation puzzles of The Gardens Between.
Chris Kerr
News Editor
November 14, 2018

The Gardens Between takes the player to striking islands built from childhood memories and objects, having them help a pair of friends work through time-bending puzzles as they explore the depths of their companionship.

Through moving the flow of time, but pulling objects outside it, players will unravel the puzzles of each island while also delving into the touching connection between the friends.

Gamasutra spoke with Simon Joslin and Matt Clark at developer The Voxel Agents to learn about the inspiration behind its time flow puzzles, how they designed its environments to tell stories and provide mental challenges at the same time, and how they would think to create puzzles based on themes.

Inspirations for puzzles outside of time 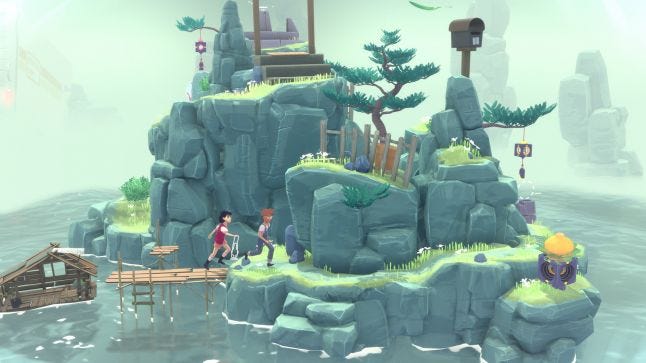 The original prototype for the game was based around the scene from Minority Report when Tom Cruise is scrubbing backwards and forwards in a memory looking for clues.  The very early puzzle prototypes were heavily inspired by hidden object games, and the idea of exploring mini-stories in the scene to find the clues - kind of like picture books when you were a kid, where the longer you look at the images, the more fine detail you see. Each image is full of tiny potential stories - so we said “what if they could be animated!?”

After digging in to that idea, we decided we really wanted to tell a specific story, and we started scaling it back and making it much simpler. The first prototype we had that you would recognize as The Gardens Between had 2 characters ascending an island.  You could pick up fire at the start of the level, and fire would exist outside of time. For the first puzzle, you held time still to burn a rope. That was our first TIME puzzle.

Then, as you ascended the island, you had to set fire to a series of beacons, and at one point you passed under a waterfall which would extinguish your burning torch.  So, you had to set fire to a falling stick, and then rewind so the fire would fall UP to higher on the path and light a beacon up top where you could pick the fire back up again later when it was on the other side of the waterfall.

That prototype was back in 2014, and shares a lot of what the game looked like in 2018 when we released. 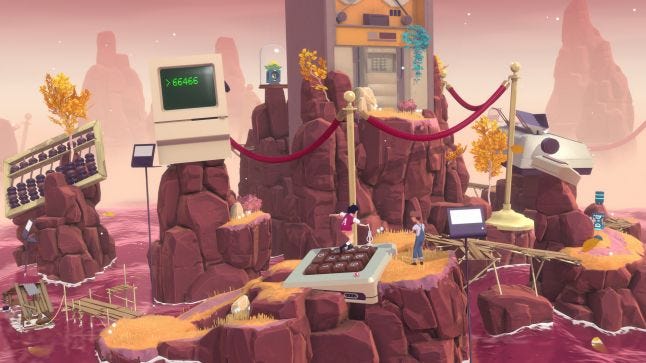 There’s two main ways we design puzzles in The Gardens Between; Logical, and Thematic.

For logical design, we first start on paper and draw out a timeline.  We know the key mechanics, and have icons to represent each one. Light flowers, dark flowers, light & dark chimes, light-phobic bridges and blockers.  Anything that can move gets a timeline, so we normally start with two timelines for the two main characters (or one if they stay together for the whole level).  Then we add timelines for other objects that move, and try to construct the puzzle logically form there.

For thematic design, we start with the theme and story of a particular level. So, if the kids are in a playground at night time, you have playground objects (slides, swings, see-saws etc). You also have street lights, maybe a torch they would have carried, a portable radio, or the bikes they used to get to the playground.  We brainstorm around those objects and think about the affordances of each one.  Lights turn on-and-off, see-saws see-saw, radios play music, etc.  Then we think about how to apply time to each object.

Often the puzzle design is a mix of both logical and thematic design.

How thematic design builds a puzzle 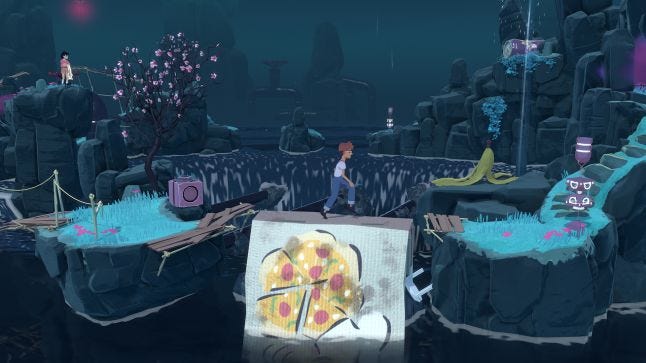 An example of the thematic design process comes from the museum garden with the giant dinosaur skeleton. This beat in the story arc is about Arina encouraging Frendt to push his boundaries. The idea is that they’re being cheeky in a museum by going behind the barricades, and perhaps they go a bit too far.

Initially we planned to disrupt or displace a single bone from the dinosaur skeleton, and that would demonstrate the characters clearly overstepping boundaries. That was planned very early on in development. However, this garden wasn’t made right until the very end (in fact, it was the last), and by this point, we knew a lot more about what made great gardens and puzzles. We knew that physics simulations that have a lot of moving parts tumbling or exploding look and feel really great with the absolute time control of the physics unraveling. So, it was an obvious choice to make the whole dinosaur skeleton fall apart!

The challenge then became about figuring out a cool way to make puzzles that take advantage of a collapsing dinosaur skeleton that you can fully rewind and fast-forward. Bones could either land in a location you could traverse, or could fall in your way, or both at different times. On top of that, the bones could hit objects on their way down to activate or shift those objects. So, with those ideas in mind we planned out the whole garden’s design on paper in our branching timeline notation.

The puzzle was kept relatively simple because it was always clear that the hardest part of constructing this garden would be constraining and managing the chaos of the skeleton collapsing. Each time you shift the landscape, each bone might take a different falling trajectory and come to rest in a new location, but also when you repose the dinosaur, that changes the starting position of each bone and ensures the result is entirely different again, but for every single bone!

So, it was a very laborious process of intertwining the bones in time and space amongst the puzzle pieces and the characters pathways. Construction was a highly iterative process, and we cheated where necessary by transposing true physics simulations to animated sequences to ensure the landing positions were maintained in useful and consistent positions.

Puzzles designed from story and memories 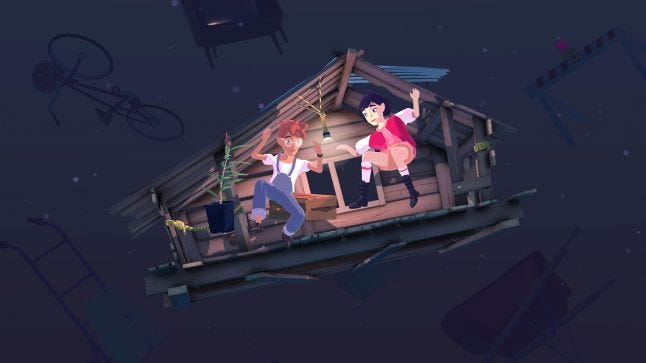 Games, as a medium, are interactive by nature, and in a story game, if the interaction is not contributing towards the story then I think you’re doing the story a disservice. In particular to The Gardens Between, we tell the whole story without any text or dialog, so it’s critical to incorporate important story objects directly into each puzzle.

Tying the narrative and the puzzle mechanics together can be quite a challenge. Not only do you need to incorporate the various objects into each puzzle, but you also need to make sure the puzzles fit into the larger context of the game and story. So, you need to design easy puzzles near the start that get progressively more challenging, and build upon prior concepts as you approach the end of the game.

We spend a lot of time discussing each garden, and drawing inspiration from our own memories of childhood. The Playground garden is a good example, if you ever snuck down to the playground under the cover of night. It was playful, but a little spooky at the same time, so we wanted to capture that feeling within the garden.

As a team, we discuss all the objects one might find in a particular setting, and we brainstorm ideas of how to work each item into the puzzle.  From there, we try to work out which ones fit together the best and lead to a cohesive experience for the player.