"With Fall Guys, one thing that’s fun is that we actually want inconsistent difficulty between stages -- we want players to have that 'oh shit' moment when Slime Climb turns up."
Chris Kerr
News Editor
October 20, 2020

Fall Guys has become one of the most talked about games of 2020, and for all the right reasons.

The eccentric, bumbling, platform royale captured the hearts and minds of the masses with its delightfully moreish gameplay and whip sharp, meme-centric approach to community management. It's so popular, in fact, that it managed to become the most downloaded PS Plus game in history while selling over 7 million copies on Steam within its first month on shelves.

Now, developer Mediatonic is looking to build on that early momentum with the launch of Fall Guys Season 2, a lavish update that introduces new Medieval-themed Rounds, costumes, playlists, and visual upgrades that should keep the bean train a rollin'.

Curious to hear how that seasonal model has affected the studio's approach to design and iteration, we caught up with Fall Guys lead game designer Joe Walsh to get some delectable insights.

Gamasutra: First of all, I'm interested to hear why you plumped for the seasonal model in the first place. How early on in development did you commit to having seasonal content, and why did you feel it was a good fit for Fall Guys?

Joe Walsh: We knew that we wanted Fall Guys to be a game that we supported for a long time after launch, and especially with the ‘Game Show’ theme it made total sense for us to split our live ops cadence up into Seasons. It’s basically been something that we talked about since the very beginning of development; that periodic drop of new content for players to experience has always been at the core of what our idea of Fall Guys is.

Gamasutra: One of the risks of seasonal content is that too many changes can spoil the broth. So, how did you move forward without compromising the core of the game -- balancing the need for meaningful change with the need for some thematic and mechanical consistency?

Walsh: We tend to start by coming up with new obstacles that we’ve always wanted to test players with, and those lead the discussion around what our Seasons might be. With Season 2 we’ve always wanted to do movable blocks, for example, as that can create really funny moments between players, and Wall Guys has been a Round we have wanted to do from pretty much day one of development. Once we had a prototype up and running we realized that scaling castle walls would be a great theme to base a Season on, so that strongly inspired Season 2’s ‘medieval’ theme. From there it’s really about making sure a Season can support multiple Rounds (and a great set of costumes too).

It’s a tough balance, though—over time I think we will naturally start to broaden the visuals and the theming of Fall Guys but I think that’s a positive. Having that mishmash of different worlds that you're jumping between is something I think really plays into the core concept of being on the most elaborate game show ever made.

Our other big challenge right now is trying to rise to the expectations of our playerbase. The game has been a huge success and we want to expand the team, but it’s a process that takes time and that’s something you really can’t rush if you want to grow a team with the right culture and skillset. That means there’s sometimes a lag where the community wants more content but you as a team haven’t reached the point where you can fulfill those desires just yet. It’s really rough for both us and the players as we all want the best possible Fall Guys experience, but we’re working hard on that. It took us about two years to make the 25 launch Rounds, so it’s going to be a while before we can be pumping out that amount again at a regular cadence! 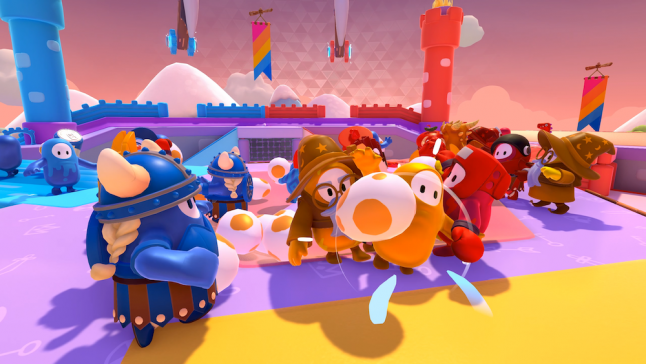 Gamasutra: Digging into your design process, how do you start creating new obstacles and levels? Could you talk us through that process from start to finish? I'm also curious to know whether factors like meme-ability (we're looking at you 'Thicc Bonkus') inform your decision making at any point?

Walsh: Wow, I mean I could probably write an entire book on what our level design process looks like, but the core of it comes from us looking at our suite of obstacles and figuring out new and exciting ways to combine them. We then ensure our Round concepts really nail our Fall Guys 'Round Pillars.'

Rounds need to be simple, replayable and have the potential to create one-in-a-million moments that people want to talk about, and from that point we start prototyping and rating the Round as a team. Once we’re happy, they go to get arted and we continue to playtest throughout that process until it’s finally ready to go live.

When it comes to the obstacles themselves, our focus as a design team is on obstacles that can create great stories as you tackle them and have lots of potential for emergent gameplay. Oliver, our Community Director, somehow manages to create these amazing memes and narratives out of them. That’s all him!

Gamasutra: Once you've started to implement those designs, how do you decide what gets left on the cutting room floor or perhaps held back for another season? What does that early testing slalom look like, and could you give us an example of an idea that got axed completely, or perhaps one you managed to salvage with some good old fashioned elbow grease?

Walsh: Season 2 especially has been a bit of a tough one as we started working on these Rounds right before the game launched—so we were essentially starting our first set of new Rounds without any feedback from the community. We also didn’t have the bandwidth at the time to implement every one of our really crazy ideas for new Rounds, as all of our gameplay engineers were hard at work bug-fixing the launch version of the game, to ensure the experience for current players was as rewarding as possible. That’s why we opted to reimagine Hoopsie Daisy as a solo-scoring experience with Hoopsie Legends for Season 2 and likewise, remixing Egg Scramble with a new map and lots of new moving parts for Egg Siege.

That’s very much coming from a place of "this what we can do at this particular critical moment in development," rather than being representative of our intentions for subsequent Seasons going forward. I think from this point we can really look to the community to get a sense of what Rounds they want more of. “More races and more final Rounds “ is definitely something we’re hearing loud and clear!

Wall Guys was actually axed from development originally because we just couldn’t get the movable objects to behave in time for launch, and so it got shunted to Season 2. It’s probably my favorite Round now and I’m really glad it finally made it! It’s just got so much potential for brief moments of teamwork with the right amount of shenanigans thrown in. It’s sort of the spiritual successor to See Saw in my eyes. 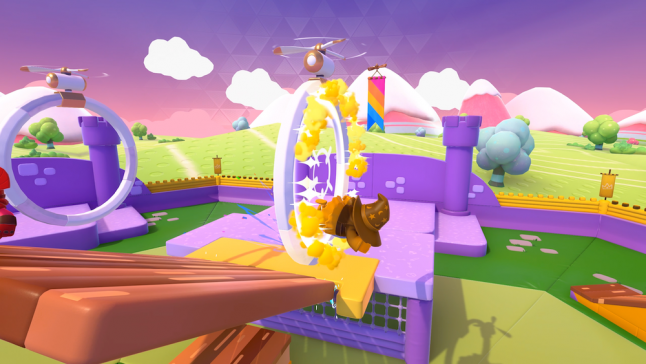 Gamasutra: How do you know when a course is *just* difficult enough - where do you draw the line in the sand? In Season 1, Slime Climb and See Saw were probably two of the harder courses (I'll be honest, Slime Climb was my personal nemesis) but although they drove me up the wall they never felt unfair. Could you talk about those difficulty curves, and how you approached difficulty in Season 2.

Walsh: So for me, the optimal spot for ‘difficult enough’ is when you always feel like it was your fault that you failed. As soon as you get taken out of thinking “there was literally no way I could have avoided that”, then we know we’ve gone too far. Hard levels have to inspire you to get it right next time, otherwise you’ll be totally put off trying again.

With Fall Guys, one thing that’s fun is that we actually want inconsistent difficulty between stages—we want players to have that “oh shit” moment when Slime Climb turns up, but you wouldn’t want that every round as it would just be exhausting. It’s kind of the equivalent of only finding pistols in a Battle Royale game. Sometimes the road to the finish is harder than ever, but that variation is what keeps the game feeling fresh.

Gamasutra: Fall Guys Season 2 will be all about those medieval/DnD vibes, but why build each season around a specific theme? Is it perhaps about creating a unique marketing angle or giving your team a clear sense of direction? Spill the beans.

Walsh: Having a marketing angle is definitely important, but it’s also a way to inspire the team to come up with new ideas they wouldn’t have thought of otherwise. Just saying "come up with ideas for more Rounds, go!" is a fairly draining way to go about it, especially after years of work trying to get our launch Rounds ready.

Theming things just lets us kick off those conversations in an exciting way that stimulates new ideas, both for the level team and the costumes team. We’re already talking at a high level about what Season 4, 5 and 6 could be, it’s super exciting to be guiding that process as there are so many places we can take Fall Guys inspiration-wise. I can’t wait for everyone to see what else we’ve got planned as we scale up and really start to explore what’s possible in this insane game show world we’ve created.