Spanish dev Milkstone Studios has released 30 games on different platforms in the last 8 years. IndieGames.com chatted with CEO/programmer/designer Alejandro González about what they're up to now.
Simon Carless
Blogger
November 06, 2017

Spanish developer Milkstone Studios are quite prolific creators: in the last 8 years, they have released 30 games on different platforms. Their latest releases are console ports of asymmetric multiplayer horror game White Noise 2 and retail console versions of their Egyptian brawler Pharaonic.

I had a quick chat with Alejandro González, CEO, programmer, and game designer of the small team (and not pictured above, I might add), about the things they are up to these days.

What are you working on at the moment?

We're currently split between working on White Noise 2 updates/DLC/ports and working on our next game, which we haven't announced yet, but I can tell it's a remake of one of our older XBLIG games. Development is coming along pretty nicely and we should be able to show something in a couple of months.

Which one of your games has been the most successful so far, and is there a noticeable difference between platforms?

Ziggurat has been the most successful without a doubt, with over 300,000 sales so far. Most of the units are from Steam and the Humble Bundle where the game got featured, but we're also satisfied with Xbox One and PS4 sales (especially since the number of discounts there has been lower), except on PS4 Europe. 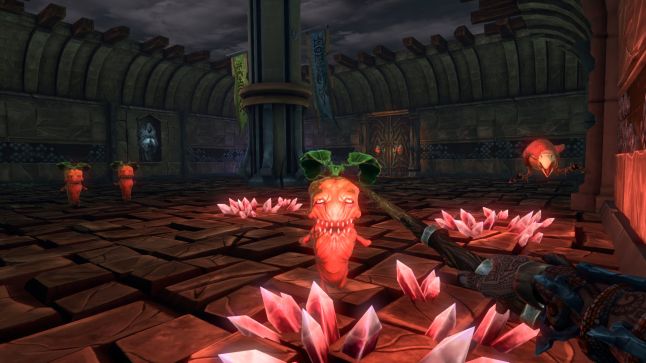 We're really surprised by the low sales numbers of the game in Europe. In fact, we've permanently lowered its price to ~5€ and even with that we haven't seen much of a difference in the number of units sold. We think the PSN store is showing games with an alphabetical sorting in many places, which would explain the low sales of a game starting with Z.

As for WiiU, the game got out pretty late, just a few months before the Switch was announced, so sales haven't been that great, but we're still satisfied with its performance on the WiiU eShop.

What's your strategy for tackling visibility issues when it comes to promoting your games?

To be honest, we don't have much strategies/knowledge to get around that. We've tried hiring PR companies / paid advertising with laughable results, and community management can only get you so far. So for now we keep relying on doing interesting store content (trailers, screenshots) and original game concepts to fit possible holes in genres, while still catering to the mainstream audience.

Obviously, getting featured by big youtubers/streamers is really helpful, but the way to get them interested in a game is mostly the same to catch the public's attention, isn't it?

What's something you love about the games industry at the moment, and what would you like to see changed?

I love that it's so easy to develop and release games to the public, thanks to the number of tools available and their reasonable pricing/licensing terms, and open platforms available. Many of the games I created as a child have been lost forever because these kind of platforms weren't available at the time.

However, with this comes the curation/visibility issue all platforms have to different degrees. Moreover, I think most videogames-related media are actually aggravating this issue, since talking about the bigger games is an easier way to get viewers. I'd say nowadays revenue isn't as equally distributed as it was a decade ago, with top titles getting a bigger share of the total market than before. Now it's AAA or Indie, with few games manage to survive in the middle area.

I don't really have a solution for that, but I think recommendation systems are a nice approach. I know Steam is trying, but it's not there yet - mostly because the system still relies on sales numbers, and the tag system isn't probably deep enough.

What does the future hold for Milkstone?

I don't know. We like to live the present, and usually work one project at a time. Our goal is to be able to survive while keeping the small team size (we're currently 5 people) and never switch to Free2Play or mobile. Both are better catered for bigger companies. Probably the day standard retail games aren't viable anymore is the day we'll close shop.

There's not a long story behind the name. Our first game (Little Racers for the Xbox 360, published in 2009) was ready to be sent for certification, but we hadn't found a good name for the studio yet. I know we didn't want the typical "Pixel" or "Bit" in the studio's name, and it had to be in English.

We looked for possible ideas in several sources, and we found this one in local Asturian mythology called "Piedra de Leche", a stone that women wore in a necklace, and was believed to provide better breast health and increase milk production. We felt its direct English translation, "Milkstone", was good enough, and had some ties to our place of origin, so we went with it :)