Tom Jubert, a writer on indie projects like FTL, Penumbra, and The Swapper, describes what it was like to co-create the world of The Talos Principle and its followup DLC The Road to Gehenna
Kris Graft
Publisher
August 21, 2015

No one was expecting Croteam to make a game like The Talos Principle. The critically acclaimed puzzler was completely different from the meaty slabs of action that the Croatian developer had been serving up in its long-running Serious Sam franchise.

In addition to brain-melting environmental puzzles, The Talos Principle confronts players with a heady story that touches on philosophy and the nature of human consciousness.

The recent Talos Principle DLC expansion The Road to Gehenna offers more brain-melting puzzles and more heady philosophizing. But it also folds in more satire and cultural commentary. Players will encounter a series of increasingly bizarre and hilarious riffs on gamer culture, and that unique mixture of ardent enthusiasm and utter ignorance that you encounter in online forums.

Some impatient players may well rush through the story sequences to get to the next puzzle in The Road to Gehenna. But there will probably be just as many who try to solve the puzzles as quickly as they can so that they can access the next dollop of delightful narrative.

The story in both Talos and Gehenna are the work of Tom Jubert and Jonas Kyratzes, who aren't full-time employees at Croteam. The developers effectively presented these outside writers with a puzzle that they had to solve: What sort of story can this game tell? "With games like these, there is no very meaningful way to tie the abstract puzzle design into the story," says Jubert. "That is both a blessing and a curse."

But hearing Jubert describe the writing process, it sounds like it was more of the former than the latter. The two writers were given free rein to fill in the narrative themselves. It was a level of freedom that most game writers would find utterly intoxicating.

Building a story around the puzzles

“What we did with the story was very much layered in on top, particularly on the first game," says Jubert. "The Croteam guys had been on it for about a year. They already had 80 percent of the puzzles implemented, and were thinking, ‘What the hell are we going to do with story for this world?’"

One of the Croteam members had enjoyed Jubert's work on the puzzle-platformer The Swapper, and tapped him to help fill in the blanks. "They just knew that whatever their game world was, it was some kind of bizarre computer simulation," says Jubert. "They contacted me and said, 'We've got this game that's about robots and sentience and philosophy and God, do you want to do it?'"

He did, and he had a collaborator in mind. "I recommended Jonas, an internet acquaintance who had created lots cool stuff along these lines," says Jubert.

"I had played his game Infinite Ocean, a point-and-click puzzle game about the world’s first A.I. It’s great because it’s very literary, it's very emotional, but it's also hard sci-fi. It really livened things up having a co-writer, and Croteam supported all of the crazy stuff that we wanted to do."

The two devised a scenario in which a humanoid automaton is presented with a series of challenges and commandments by a disembodied voice called Elohim.

There's also a lot of dialogue that appears as text on computer terminals inside of the game world. "Jonas wanted to write for the voice characters, and I particularly wanted to do this interactive character Milton that's accessible on the terminals," says Jubert. "That was an idea that had been burning in me for a long time." 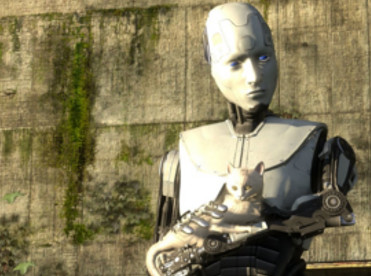 The two writers were brought in a bit earlier in the design process on The Road to Gehenna. But not much earlier. "It was still the case that they had half of the puzzles already in place, but we did get to help with the hub world and how to lay it out,"  says Jubert.
This DLC follow-up goes even deeper into the terminal-style text interactions found in The Talos Principle, to the point that players will find themselves combing through what feel like forum posts, and playing through what are essentially text adventure minigames-within-the-game.
"That stuff is the result of giving a writing platform to two 30-year-olds who have been thoroughly immersed in the internet for 20 years," says Jubert. "Playing these games is sort of like the experience of surfing around the Internet. You’re getting a little bit of this elevated biblical voice, and then you get a snippet of Jean-Paul Sartre, and then you get jokes about cats."
Jubert has served as an outside freelance writer on many critically acclaimed indies. In addition to The Swapper and the Croteam puzzlers, he worked on FTL and Penumbra, and has recently signed on to Subnautica.
“I’m not wedded to small budgets or indie studios as a matter of principle; it just happens that that’s where I can get the most good work done," he says. "After I worked on Penumbra, I spent a few years on big triple-A games for Sega and some other outfits, and without exception they were all canned, or I was constantly having crazy arguments with the marketing department."
"There are some major properties i would love to write for," he insists. "If IO is listening, I'd kill to get my hands on Hitman! But a big triple-A is so many years of your life, there’s so so much money involved, so many people you have to contend with to get your vision to market... It’s not controversial to say that indie game developers are more streamlined and more ready to take risks. Working with them has worked out really well for me.”
Get daily news, dev blogs, and stories from Game Developer straight to your inbox
Subscribe