Permadeath as a game mechanic in a survival horror: the Song of Horror case

Implementing permadeath in a narrative-driven game can be a tricky feature. A post-mortem on the use of permadeath and a reactive AI in a survival horror game.
Carlos Garcia de la Filia
Blogger
October 29, 2019

When we started working on Song of Horror, we wanted the game to be focused on two pillars: we wanted players to feel defenseless against The Presence, the AI entity that adapts to their gameplay, and we also wanted permadeath to be an important trait of the game. After five years of developing Song of Horror, we believe we have accomplished both.

Implementing permadeath in a narrative-driven game can be a tricky feature. How do you design a game with unique characters in a way that each and every one of them can add something to the story? How do you design it so you can continue investigating if they die?

At Protocol Games, we didn’t want players to experience Song of Horror as a game where you have lives. Instead, we believed those lives might be represented by other characters. So, if you die in Song of Horror, that death means something. This means you won’t be able to play with that character again. And that decision has its consequences: from a gameplay perspective, some are better than others at investigating, while there are a few that are best suited to fend off The Presence’s attacks. And, from a purely emotional standpoint, picking your favorite character means you get to play with them and experience their personal viewpoint, but it also means you’re putting them at risk. We also felt you needed one central character. Daniel, that has to survive the whole story, but we liked the idea of having a supporting cast of individuals that you can lose forever if they die. This doesn’t mean that Daniel can’t die. He can, but his death will be similar to what happens when you die in a roguelike or when you run out of time in the original Prince of Persia: you go back to the beginning… or do you? This kind of absolute permadeath makes sense when the average run time before the loss of a character is short enough, but not when players might be forced to, in essence, repeat multiple hours of content. So we reached a compromise: it would not be a pure permadeath that sets you back the whole game, but rather one that takes you to the beginning of the current episode, which is also what happens if you lose all available characters for a given episode in which Daniel takes no part.

Let’s put it this way: we split the black-and-white mechanic of permadeath into several shades of gray, the lightest being for his companions and the darkest meant for Daniel himself. And that’s why we believe that having this group of people will be interesting: players will have their favorites. It is interesting to create some sort of bond with the player: What will happen to them? Where are their limits in the investigation?

Song of Horror is a narrative-driven game and Daniel’s story is central to it: we follow him since the moment he gets trapped by the music box’s melody until he discovers everything that’s behind it.

If Daniel is lost, his journey would cease to make sense; that’s why we chose to let other characters leave the investigation in hands of another to support the main arc.

Permadeath and its effects on narrative

It sounds complex and, believe us, it has been difficult to implement. Writing a story knowing that you have a bunch of characters that may —or may not— make it until the end has been a challenge.

From the very beginning, we were convinced that we wanted a game that paid a tribute to the classics of the genre. We played Resident Evil, Silent Hill or Fatal Frame when we were young. These are games with strong characters driving the story. Sometimes, their strength comes not only from having a strong lead but from a group of supporting characters that help you create a richer atmosphere. It is also a great tool for game mechanics since it allows you to introduce different playstyles. 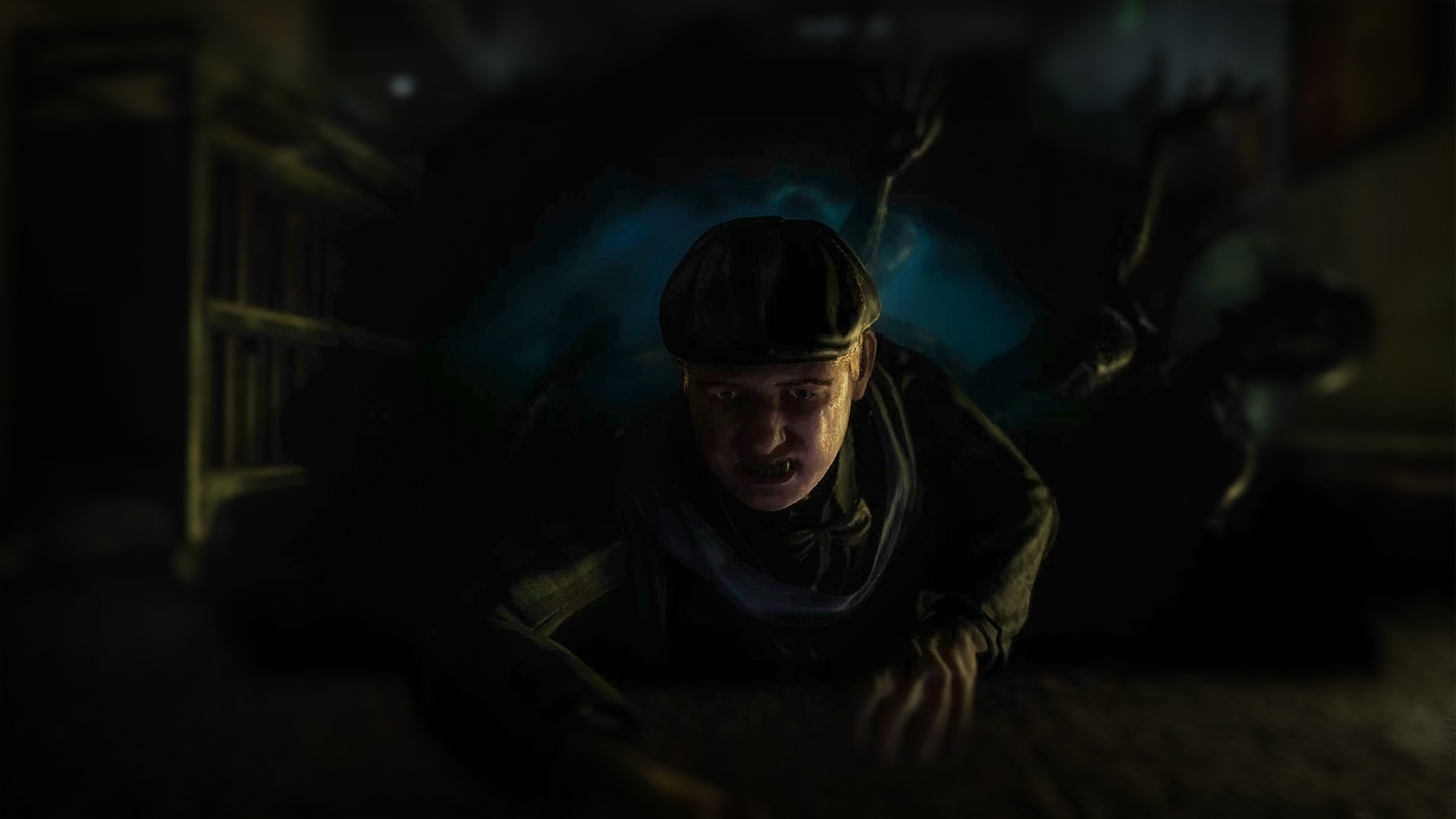 To accomplish this, it was also important to avoid any mechanic related to shooting guns or any other weapons. To prevent players from feeling safe we needed to encourage them to run, hide and struggle with The Presence, and the only way to do it was by eliminating any temptation to give them tools that felt really powerful, such as a shotgun, that made them feel indestructible. It was absolutely necessary in order to generate the creepy atmosphere we were looking for, while also portraying what The Presence is about. We didn’t want to create an enemy you defeat by shooting at it.

Our approach to this idea of a group of characters that would support the lead was simple: we didn’t want to introduce them all at once. Instead, we wanted players to unveil them as the story unfolds. That way, we ensure several things: we keep each Song of Horror episode fresh, with new additions to the cast that offer new ways to investigate. But, more importantly, we manage to keep up the tempo: if a player could choose any of the characters from the very beginning, we’d risk all of them dying very soon in the game. It was crucial to avoid this in order to prevent Song of Horror from turning into a monotonous game.

In the end, we have 13 playable characters, but we have managed to group them in a way that introduces only two to three new ones in every episode. How you manage them and how you keep them alive is up to you. The idea might remind you of the mechanics in classic games such as Maniac Mansion: every individual has unique traits that will help you in different ways during the investigation.

As we explaned before, we decided to go with a main character and a supporting group so the narrative could play a central role in the game. But implementing permadeath meant a series of challenges that we had to face. We had to tell the story in a way that allowed for the deaths of certain characters to not affect the main plot.

But we also felt that, given the possibility of having to replay an entire episode, it would be nice to for gameplay to feel as different as possible from the one you already experienced. That’s how The Presence came to be and how we created the unique events that are scattered through each and every episode.

Giving the players different play styles in every episode led us to only introduce a few characters per episode. Getting the exact number was a challenge as well. We had to think carefully about how many of them should appear in every episode and when they should enter the story. We also did so in order to help players. In a game with permadeath, we wanted to avoid the potential snowball effect of a struggling player losing a lot of the characters in a single episode and thus making the rest of the game impossibly difficult for themselves, especially in the first episode, where the player is supposed to be learning the ropes.

Not only was this decision related to gameplay and balance, it was also both a necessity and a boon in terms of storytelling. We already had to walk a fine line designing the script to be as modular as possible with the current number of characters, while also aiming to maintain player interest and internal coherence, no matter what situation the player finds himself in. Having so many supporting characters meant that every cutscene had to be made taking into account which ones were alive in order to maintain continuity every time you play.

As we stated earlier, we love survival horror classics and some of them were an inspiration to us. But we didn’t want to be simple copycats. Instead, we tried to take bits and ideas that we found interesting and adapt them to fit a game with permadeath.

For example, we didn’t like that sense of security that comes right after saving your progress because, let’s face it, you know that you won’t lose virtually anything if you die immediately after. While the moment right before saving can be a rightly tense one, we felt that manual saving of any kind would do more to undermine what we were trying to accomplish than to help it.

Instead of creating tension-relief cycles tied to save points inside a given episode, we wanted the episode itself to be the “tension” part of the cycle, and the narrative between episodes to be a moment of respite, enabling the player to enjoy it to the fullest.

Within an episode, however, and especially because it can take the player several hours to complete each one, we were aware that keeping the tension sky-high at all times would not only be a fool’s errand, but also counterproductive to the experience (tension and stress can easily turn into frustration, after all), so we gave The Presence the tools to create its own dynamic mini-cycles of tension-relief, of danger and relative safety, so the gameplay of an episode doesn’t feel stale even if you have already played through it.

There’s also a third pillar: when do we want tension and stress to reach their peak? The answer for us has always been “right before the end of an episode”. Placing the mandatory save point before the “final boss” would definitely ruin that moment for us. On the other hand, reaching that moment with your favorite character, or with only one remaining… that’s something else entirely.

Song of Horror releases this Halloween. On October 31st, players will be able to play the first two Episodes and get a taste of what it means to take care of a group of characters than don’t have infinite lives. Every decision counts, and every investigator in this story matters. How they end up is in your hands... And yours alone.