Overworld Overload: An Analysis of Link to the Past’s Light World, Part 1

A player's look at the overworld of Legend of Zelda: A Link to the Past, all the while asking the question, could we procedurally generate something (even close to) this good today?
Benjamin Marshalkowski
Blogger
April 19, 2016

There have been many articles written about the ingenious level design of the Legend of Zelda (LoZ) series, particularly about its dungeons. One article that recently caught my eye was about randomizing the original LoZ, from the dungeon rooms to the location of everything on the overworld map (dungeons, shops, monster groups, etc.). The most interesting takeaway was how well the game stood up to this kind of randomization, largely because it was so open-ended to begin with -- almost every obstacle has multiple solutions, so it’s difficult to get dead-ended.

This got me thinking: what if you could randomly generate an entire LoZ-style world? Not just the contents of each door on a pre-baked map, but rather to generate every region and every screen of the world. To explore this idea with the original LoZ overworld felt unnecessary, again the game’s open-world nature made it feel like there wasn’t much of an “algorithm” to be found for the world’s design. Link to the Past (LttP), the Super Nintendo successor, however, had more direction throughout the game, while still maintaining a world that felt simultaneously very open and very rich. Could an analysis of the game’s world uncover some kind of basic kernel, some constituent parts that could be used to make an endless variety of mystical adventuring worlds?

In part 1 of this analysis, I will look at how the world of LttP can be broken into discrete regions similar to how a computer program could generate a tile-based map. 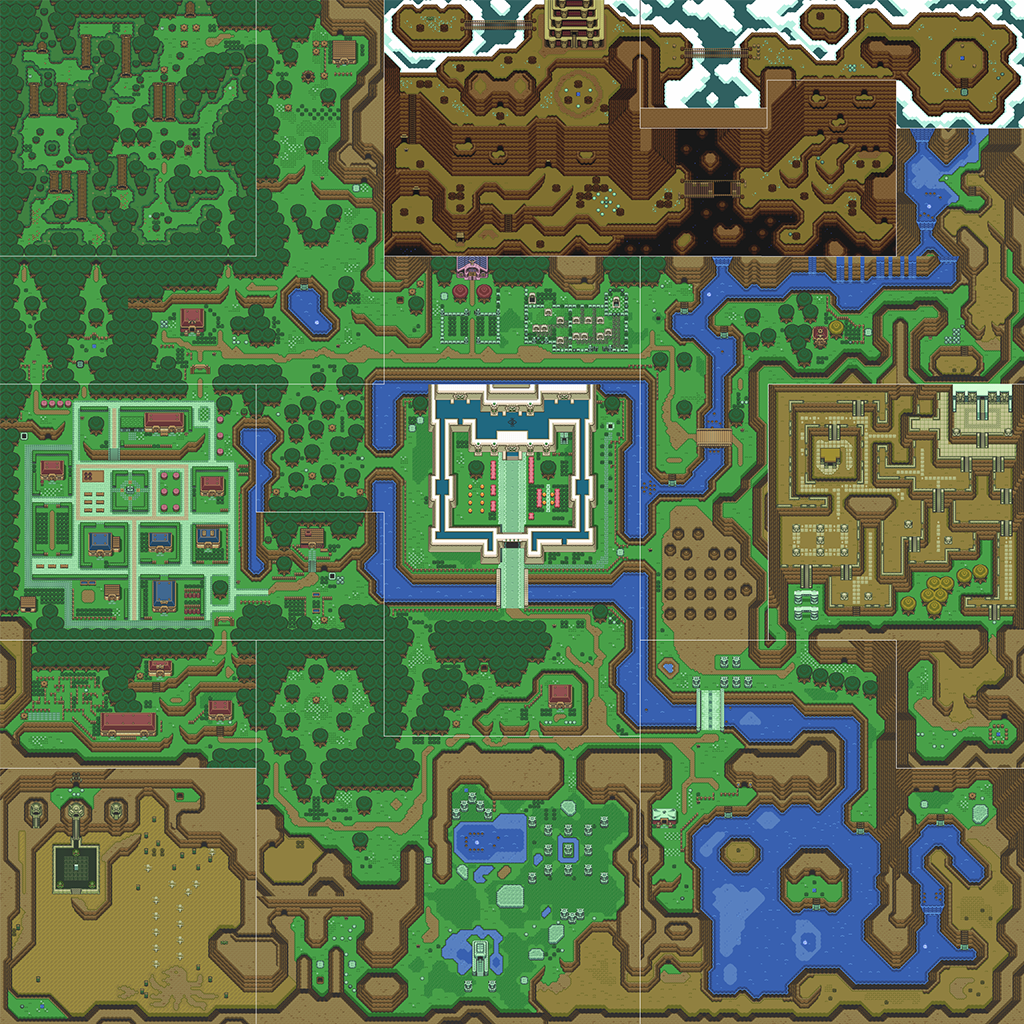 This is the world of LttP, or technically half of it (Image courtesy of the Zelda Wikia page). At first blush, it is a 4096x4096 pixel map dominated by green and brown and a current of blue. Upon closer inspection we see some specific regions. There are roughly eight* main regions connected by a network of “connecting zones”. It is also worth noting that the world is broken into 64 “chunks” (8 squares by 8 squares of 32x32 tiles each), though many of these are connected into mega-squares, such as Kakariko village in the central west.

*I'm putting a disclaimer here that any of the numbers I suggest or regions I delineate are, of course, arguable. For example, Death Mountain below could be broken into Death Mountain and Turtle Rock. I used my best judgment in trying to break down the world sensibly, but others may disagree with my conclusions and they are welcome to do so. -BLM 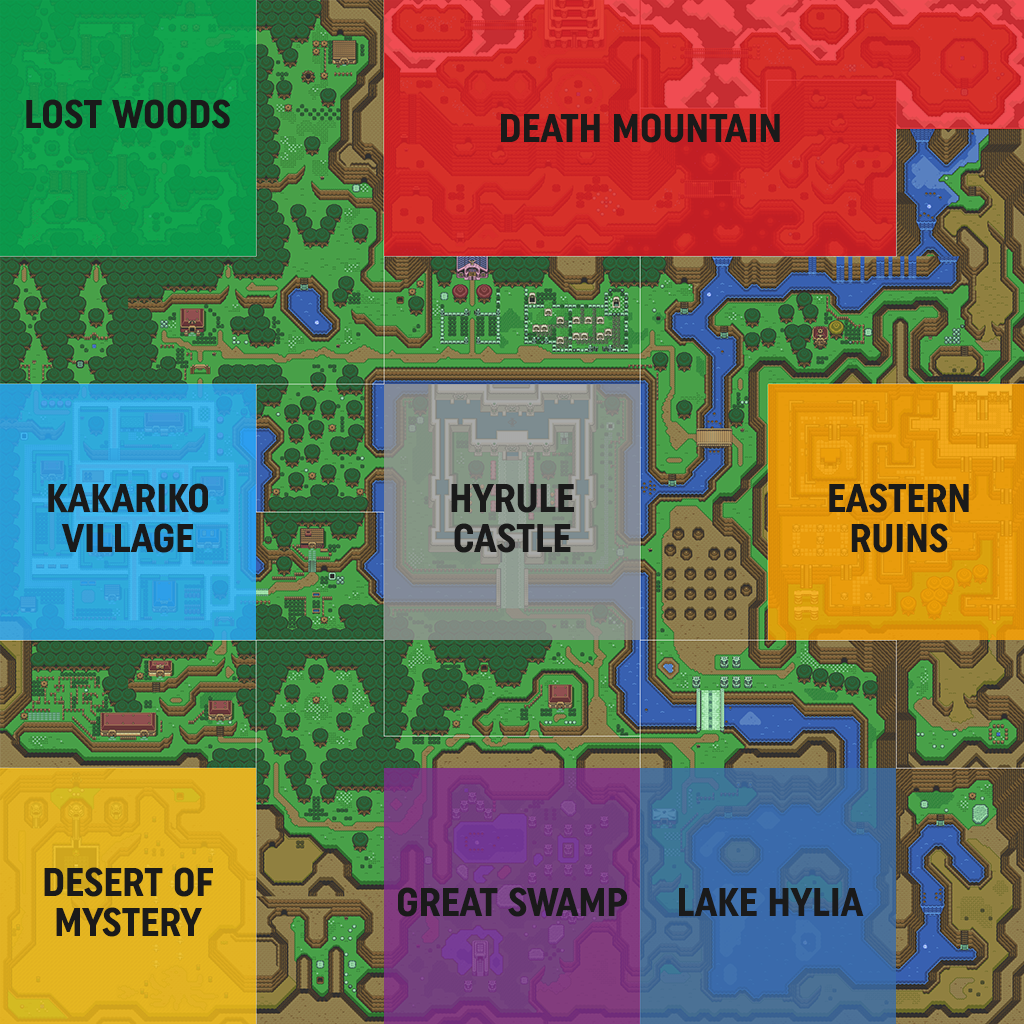 These eight core regions (most of them notably 2x2 chunks) are where the bulk of the action happens in the game -- they are either home to the world’s dungeons or critical to accessing the dungeons in the Dark World. With that said, there are also many encounters and important items to be found in the connecting regions.

Many of the connecting chunks are also inherently tied to these other regions, for example, the twisting canyon between the Desert of Mystery and the Great Swamp is essentially the gateway to the desert. Some chunks, however, particularly those around the Eastern Ruins are rich enough in their own content that they stand on their own, though they are not specifically a core chunk.

If we annex these chunks where we can, or separate them into their own regions where necessary, we get a map that looks like this: 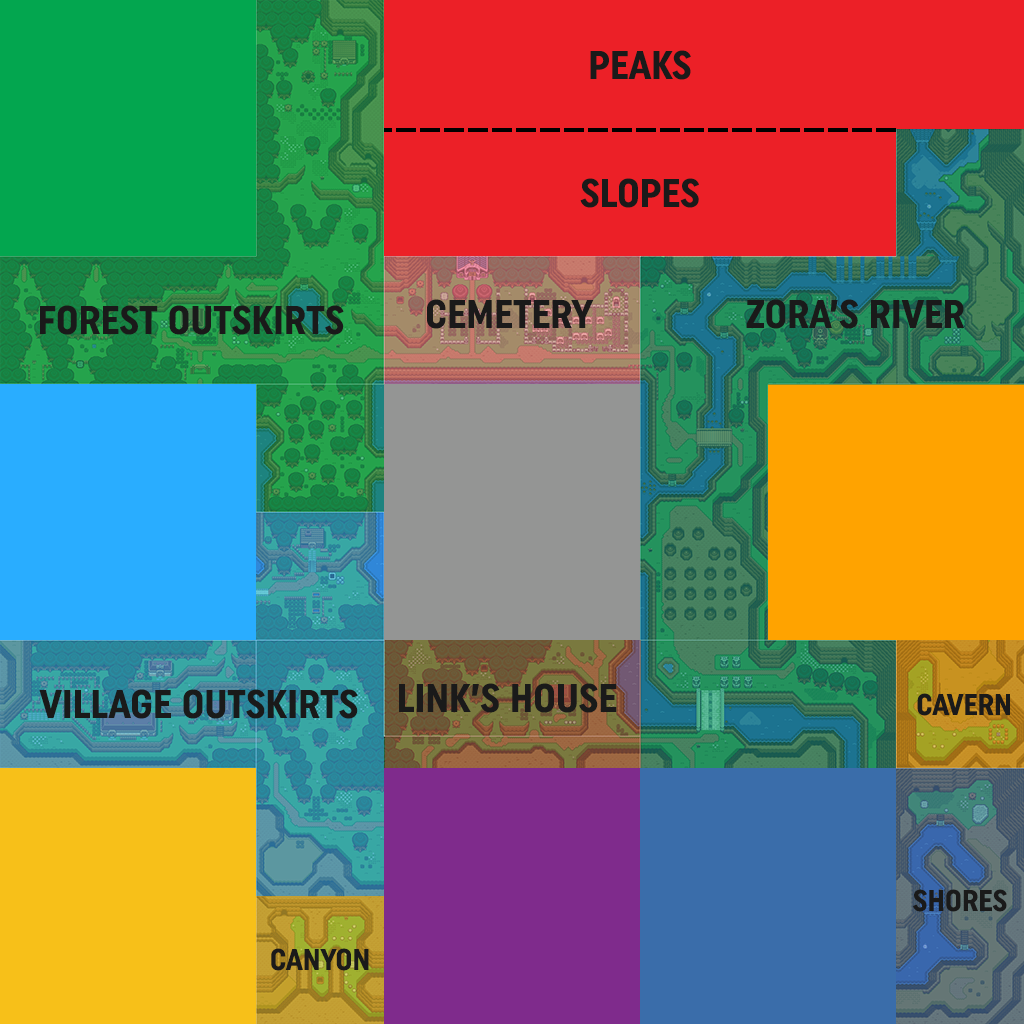 We've added three new “mini-regions”: Link’s House, the Cemetery and Zora’s River, and the rest of the chunks are annexed in some way or another. As a result, we can consolidate all this into 11 regions that look as if they had been procedurally generated by short random walks and/or some flood-filling. (Death Mountain has no annex, but I did divide its peaks and slopes because they are strongly delineated in the game) 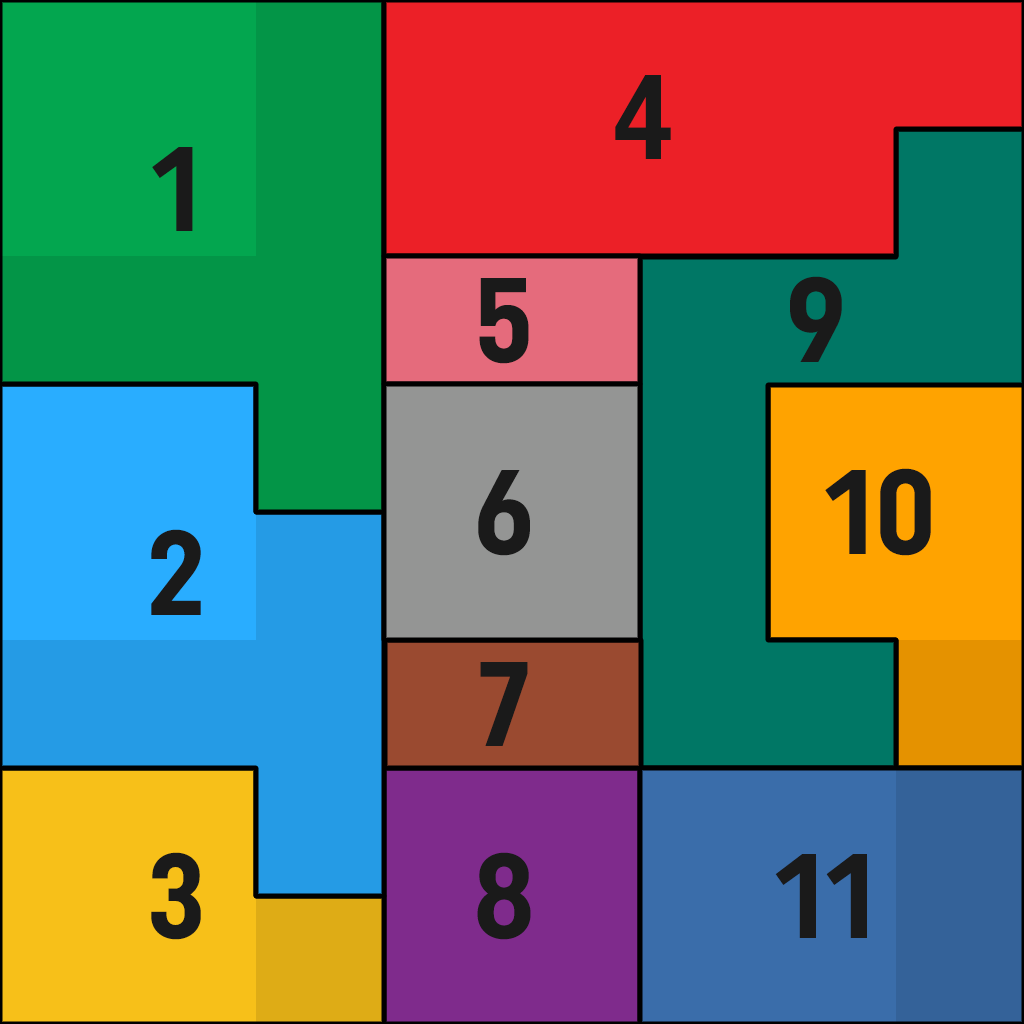 Obviously, these regions were hand-designed and tailored at the time LttP was created, but with this basic 8x8 grid, broken into regions of varying shapes and sizes, it is easy to see where today’s computers could get a start on building such a world.

Of course, LttP is much more than a collection of regions that players can walk around in. The world guides the player throughout (almost completely silently), so the player feels like they are exploring, and the world expands as their inventory and experiences grow. In Part 2 of this analysis, we'll look at the physical structure of the LttP world.

Legend of Zelda, A Link to the Past and the Hyrule Overworld Map are all property of Nintendo.