Here are some of the struggles my developer friends and I have had with playtesting, and how we deal with them.
Peter Angstadt
Blogger
June 10, 2015

Here are some of the struggles my developer friends and I have had with playtesting, and how we deal with them.

Where and how do I find playtesters?

Here’s three broad categories of playtester and where to find them in the wild:

The Developer Tester - is someone with game development experience who can look past the obvious flaws of an early build. Use them for early playtests. They have encountered similar design issues and know of other games, films, and art you should check out as reference. They will have strong opinions about your early design direction which can be deeply insightful (or sometimes potentially derailing).

The Kleenex tester - is someone you use to test your game once, then never again. They have no previous expectations about your game and will show you where your design is confusing. They are a good gauge of how engaging your game will be to a first time player. You can find these folks at conferences, at local meetups (like this one), online at places like tigsource or r/gamedev, and friends of friends.

The Expert Tester - has played your game many times and can help tell you whether the shield buff worked better at a four vs five second duration. They show you how compelling your game is to the repeat player and they usually graduate from the previous two categories. On Cannon Brawl a game designer friend of ours really got into the game and provided really valuable testing and feedback throughout the process. We also had some people from our steam forums who wrote us detailed analysis of our balance updates and eventually we skyped together to talk about design decisions. 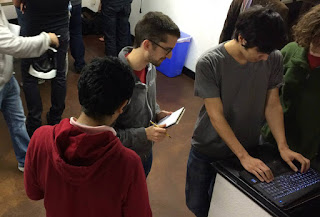 Collecting feedback from kleenex testers at a Unity event

How can I get the most raw and honest feedback?

You don’t want people holding back their ideas and criticisms. Playtesters have three fears you need to allay to get their best feedback:

They aren’t ‘good’ at your game. This is a problem for non-developer testers. They can feel that they are ‘performing’ for you and that they need to do well at your game. First warn them that you sometimes won’t answer their questions or help them if they get stuck. Tell them ‘being good or bad’ at the game doesn’t matter at all and that discovering the confusing and frustrating parts is exactly what you need.

They don’t trust you to value their feedback. To build trust, write down everything they suggest to you regardless of whether it applies or not. The first thing they say might not be useful, but they need to be comfortable sharing everything they’re thinking. A gem of design insight could be anywhere.

Never contradict their feedback or tell them they’re wrong. We often want to justify our previous decisions and explain to the tester the very special reason why they are wrong in this particular instance, but this is destructive. Remember, at this stage you are purely collecting feedback, not evaluating it.

They are going to hurt your feelings. Especially if you’re doing a playtest in person, testers often don’t want to come across too negative because this can be awkward (especially if you just met them). You need to explicitly tell them to not worry about hurting your feelings and that all feedback, both positive and negative is welcome. I often prompt them with questions like “What parts of the game were your favorite? And what parts were the worst or need the most improvement?” You can also say stuff like “this is all temporary, everything will probably change” even if it isn’t true to help them think outside the constraints of the current build.

How can I overcome the crushing feeling of a ‘bad’ playtest?

Sometimes you get a playtester that hits every snag in your game, misses key parts, and ends up with a pretty negative reaction to your creation. This can really hurt because all these problems they’ve discovered are your fault and your responsibility to fix.

After a month of development without any outside feedback I ran a playtest of DIGHARD. The tester found the game to have very poor pacing. This hurt to see because in my mind the game is always in its ideal form, fast and exciting. The key for me is to remove myself and ego from my work during playtests. I have to remember I am not my game. We are the process of game development not the current or final result.

When do I playtest?

Figure out what you are trying to learn before you playtest. Example goals might be very specific like  “will players understand the mechanic I introduce in this level” or more general “how do players react to the entire game.” This helps you discard potentially derailing feedback on pieces of your game you know aren’t ready yet.

They want me to totally change my game!?

Sometimes testers will forcefully suggest new ideas and changes. When expert and game designer testers give this kind of feedback, you can feel unnecessarily pressured to actually make the changes. Instead, figure out why they are suggesting the changes. They might be right, but you need to know what problem they had that lead them to suggest their big change.

On Cannon Brawl early in development we got feedback that we should make the game turn-based instead of real-time. After some follow up questions we discovered the testers actually “had too many things to manage at once and felt overwhelmed,” especially in the beginning of a match. By re-tuning the gold curve and building cooldowns in the opening few minutes we fixed the issue. Finding out the real problem was the information I needed to do my job as a designer.

Solve the biggest problems first, especially if they keep coming up over and over. It could be that your biggest problem is players don’t understand the fiction. Don’t spend time continually tweaking item stats. Spend your time fixing the biggest issues to make the most progress. It sounds obvious but your biggest issues often are a result of your particular development weakness and solving them requires research, uncertainty, and maybe outside help.

Do you have any struggles or tips for playtesting? Let’s talk about them in comments!