In this installment of Organic Matter postmortems I'll be talking about the inspiration behind the game — which was fake in more way than one.
Ilya Chentsov
Blogger
April 27, 2021 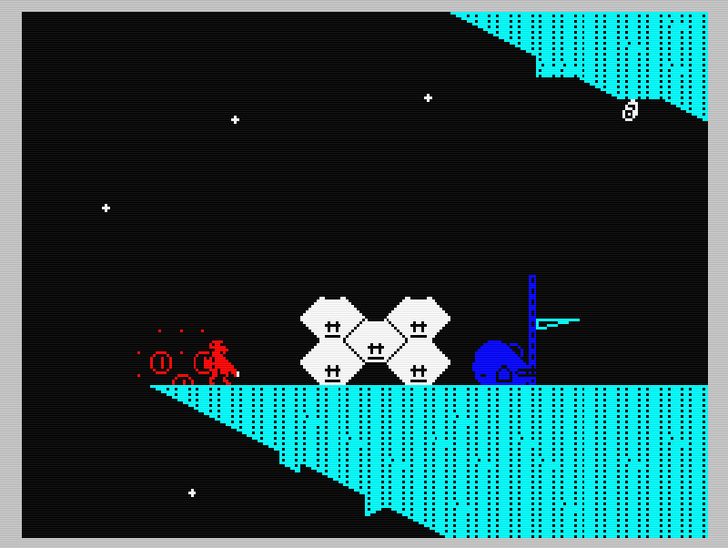 It's been several months since Organic Matter was released, so, I presume, everyone who wanted to play this game already played it. Therefore, be notified that there are spoilers ahead — and today we will talk about the general concept of the game.

And first, let me remind you that the game is based on a description from a “500 games” guide book for ZX Spectrum published in 1991 (give or take). The series started with real games, but in later issues authors apparently ran out of material and decided to straight up invent their own titles. So, here’s the one I used as the source of inspiration (click here to see the actual page scan, in Russian):

At the end of the year 2143 there were more than a hundred big laboratories in space, researching and creating new organic matters. Thousands of people worked on this project for a long time, but haven't achieved much. The government started to close those starlabs because of their low profitability, turning them into giant space wanderers.

And on one of those abandoned stations, an accident happened: a short circuit activated the life support system of a mutant that was bred on the station. It became alive. It was incredible. And from this moment, the troubles for humanity started.

The mutant possessed an exceptional intelligence, since a dead scientist's brain was transplanted into his head. Single-handedly, he repaired the station and turned it into a battleship. He also started to create more mutants like himself. This battleship became the nemesis of all trade vessels.

In this situation, the Earth Government decided to destroy this ship. To do this, its energetic power source needs to be disabled and all mutants have to be destroyed. This task is assigned to you. You are teleported to the station. Go on! Good luck!

Pop quiz! When exactly you stopped reading and thought to yourself, “This is bullshit!” For me, it’s the words “and turned it into a battleship”. So, there’s an abandoned science station with a brain of a dead scientist on board, and when he’s revived, he suddenly turns the station into a military starship? Why? Wouldn’t it be more logical for him to continue his work? Especially as we can see that despite the intro saying that the people on the stations “haven’t achieved much”, there was a ready-to-be-revived mutant on this station. Maybe the intro deliberately belittles the scientists’ achievements so that you have no second thoughts about killing them?

OK, so if the villain of the story isn’t our mutant boffin, then who? Let’s re-read the text: “The government started to close those starlabs <...>the Earth Government decided to destroy this ship”… Here they are, our bad guys — first they lowered the financing for the station and then decided to destroy it. If we assume that the hero (or heroine) of our game is manipulated by the Earth Government, we can easily deduce what really happened: the problem probably was not in lack of results, but the opposite: the scientists decided that their results are too important to not be shared freely to all people, while the government had plans to use those commercially. The socialistically inclined workers are disposed of, but the job was done sloppily, and you have to finish it.

Now, the next problem is how to tell the player that they’re duped and the station is not a battleship but still a science laboratory. The simplest solution that comes to mind is making it look not like a shooter level, but like an actual place where people work and live. At first I had the idea that the mutants would become hostile if you attack them, but then I decided that their defense would be strictly passive — i.e., locking the doors. There are four reasons for that: 1) it’s doubtful there are any weapons at the station (it would be hard to quell rebellions if the scientist were armed); 2) the mutants inhabiting the station are still nerds who won’t put up much of a fight anyway: 3) when you can create new mutants anytime, each of their lives doesn’t have much of a value; and 4) the scientists’ humane ideals and belief in conscience make them think that the invader will eventually understand what’s right, and if he doesn’t, then he won’t receive their knowledge.

So, most people on the station just go on with their lives, hoping that the government agent would observe their non-agresssive behaviour and won’t hurt them. Note that since there are initially no dead bodies on the station (as the staff probably would have them removed), the station overseer, the first mutant mentioned in the intro, is sitting in the observation room, ready to tell us what happened there. Of course, as the science labs in video games are usually up to no good, even if their intentions are declared to be benign, we can reject his version of the events — but then we still have to make our own conclusions based on our observations.

In the next installment of these diaries, I’ll tell more about worldbuilding.

Now, a question to players: when you first entered starlab Phoenix, what was your impression? Did you have any idea what happened there? Could you understand what different rooms where?

Here’s a (not quite final) map to refresh your memories: