Options for Ethnicity in Character Creators, Part 1: Race in Games

As fans of RPGs, one of our favorite parts has always been the character creation and customization. Spending a lot of time in character creators over the years, we noticed a pattern in which the available options seemed skewed. As a result, we got the feeling that many ethnicities were somehow being actively ruled out and we both thought this was a prominent problem that needed to be examined further. This article is a comparative analysis of character creators in a selection of fantasy computer RPGs and MMORPGs, made for our bachelor's thesis at Uppsala University Campus Gotland.

We chose games from the fantasy genre since we noticed that the issue of the omission of ethnic minorities is often strongly present in those. The games we examined were developed in North America and Europe, including Russia: Allods Online, Dragon Age: Inquisition, Guild Wars 2, Kingdoms of Amalur: Reckoning, Neverwinter, Rift, The Elder Scrolls Online and World of Warcraft. We collected data of the human races and examined whether the character creators allow representation of different ethnicities.

By following a defined procedure we gathered relevant perceivable data from the character creators, which was the basis of our analysis, and conducted a series of interviews with people of different ethnicities to include opinions from those it directly affects. These interviews added different perspectives and valuable insight to what players want versus what’s offered, when analyzing the results from the data.

When we use the term race, we mean it in a virtual setting inside a RPG system where characters, nations and cultures are products created by game developers, with clearly designed differences such as biological appearance and abilities. But while racialized social systems in real life are a fact, biological determinism to define human groups into different “races‟ is a social construct (Bonilla-Silva, 2006), so instead, we say ethnicity when we refer to real life.

When we conducted research in preparation for our thesis, we found studies about self-representation in games that show the importance of diversity. When creating a personal character, players usually make the character more similar to an ideal self than to their actual self, and being able to act through a character closer to an ideal self may help create positive real-life changes and increase a person's well-being. It might sound far-fetched, but it’s supported by a study done by Bessière, Kiesler, Kraut, & Boneva (2010), which showed that the use of online games as entertainment resulted in a reduction of depression over time. The game world gives players the freedom to create successful virtual selves, but at the same time, the player’s identification with the avatar is very important for the enjoyment of the media (Trepte, Reinecke & Behr, 2010).

In the same study, it’s stated that a higher similarity between player and personal character leads to increased identification with the character, and coupled with the previous paragraph, we can assume that character-player similarity leads to media enjoyment. This would mean that if the player cannot create a character that properly resembles them, some enjoyment is lost. While of course some players sometimes want to play as characters that are dissimilar to themselves, studies show that most players find gaming scenarios more entertaining when they can create characters that are more in accordance to their own appearance (Trepte, Reinecke & Behr, 2009). So imagine the frustration when time and time again, there’s no options to create a character that looks like yourself.

Many fantasy settings have a vague historical European aesthetic. However, using that as an argument to not include an ethnically diverse cast of characters is invalid, as there has always been a variety of ethnicities in Europe, as seen in both art, historical records, findings, and countless other sources. (for example Gates, H.L. 2010. “The Image of the Black in Western Art, Volume II: From the Early Christian Era to the ‘Age of Discovery’, Part 2: Africans in the Christian Ordinance of the World.”.)

In order to study the games and be able to compare the character creators, we created a procedure that was used to collect data. It needed to cover all areas but still be flexible enough to be applicable to all games, and to make the data reliable. It was intended to be extensive enough to be objective in its purpose, which was to collect the relevant perceivable data available. The procedure was designed with the selected games’ character creators as well as previous knowledge in mind, and focused on five categories: presets, skin, hair, facial features and body. Since the procedure was very extensive, some categories did not apply to every game. For example, if a character creator didn’t offer any presets or didn’t let the player customize the body, those categories were not applicable and weren’t collected. Some categories allowed exceptions to be made, since not every game is the same. The data in its entirety is available to be viewed in our thesis (http://www.diva-portal.org/smash/get/diva2:819422/FULLTEXT01.pdf).

In order to gather opinions on what people think about ethnicity in character creators, we sent out an online survey to a number of people, and the only requirement was that they had played games with character creators. The interviews were anonymous, consisting of twelve questions with free text answer fields, and we encouraged them to leave longer answers about their thoughts and experiences with character creators. The interviewees were of a wide variety of ethnicities and backgrounds. The interviews were qualitative research on a small sample, and were not intended to be statistically representative of the population of players. We conducted them to give voice to those it directly affects and as an incentive for further research. Relevant interview answers are included throughout the article, the rest can be found in our thesis.

Fantasy as a genre frequently blends real life cultural signifiers to create an entirely different world, but their original meaning can’t be overlooked and are often noticeable. So while these people and nations are fictional, they still often take inspiration from cultures and racial identity formations in the real world. Therefore, it can teach us multiculturalism and tolerance, but if done without consideration there’s a risk of reinforcing stereotypes instead. 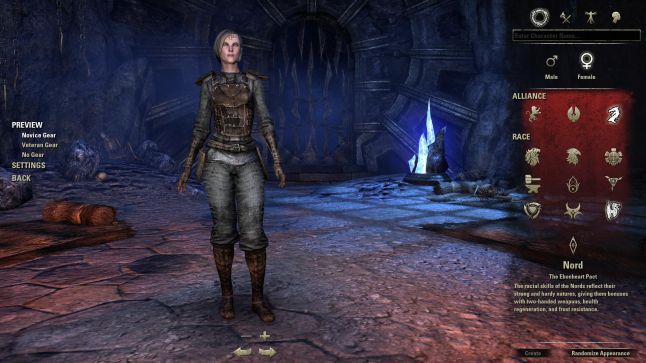 When entering a character creator one of the first choices is to pick a race. In some games there are several different human races coded with different ethnicities, while others have only one fully customizable human race. Out of the examined games, Rift, Allods Online, The Elder Scrolls Online and Kingdoms of Amalur: Reckoning have two or more different human races, while World of Warcraft, Dragon Age: Inquisition, Guild Wars 2 and Neverwinter each have one race presented as “Human”. An argument is that having a determined, for example, Black human race will help strengthen the presence of different ethnicities in the game world. A few of the interviewees were on the same track: “It will help to "normalize" various ethnicities instead of everyone choosing a "default" white human and then making "exotic" character variations.” But the majority of the people interviewed had a negative stance about having several human races, saying that it would be an easy way to implement racism and stereotyping, dismiss the need for characters of color in the game world, and for the player base to ignore the non-White playable characters. “The differences are too complicated and ultimately too marginal for it to represent any significant dynamics among different human races.” We agree that the danger of having several playable human races with different abilities specific to their race is indeed that it may subconsciously reinforces stereotypes and creates prejudice towards real-life ethnicities.

A possible way to avoid creating unintentional stereotypes is to disrupt the notion of race as geographically and biologically fixed. An interviewee touches the subject too: “[Humans] often hail from different continents or countries, have different cultures and standards. I enjoy games in which the [character creator] differentiates this as a function of deeper immersion for the player. That's not to say that I think skin-tone and ethnicity would be similarly monolithic within those factions.” It would be interesting then to see a RPG in which race and culture are not one and the same, where for example the player would first choose the culture, to which abilities and the like are linked, and afterwards the race and ethnicity. It would provide interesting world-building, and would also mirror real life history, where people from all cultures have traveled all over the world throughout the ages. Similar concepts can be seen in science-fiction, for example the Federation in the Star Trek franchise, or in the Stargate franchise, where The Ancients are a humanoid species that always features people of all human ethnicities. This would naturally present another set of development challenges, but it would interesting to see an attempt in the fantasy genre.

Having several human races does not mean diverse ethnicities, as we noticed in Allods Online, which has two human races, both coded White and European. But having only one human race does not mean it can be customized to all ethnicities, as seen for example in World of Warcraft, that is severely lacking in options. There exist pros and cons with both alternatives, and developers need to be aware of this, regardless of what they choose to do. They need to want to include different ethnicities, as there is a decision behind every part of the a game. Both the studies we found and the interviews we did show that audiences, regardless of their ethnicity, are clamoring for more diverse content, and want more ethnic representation. But as the results from our thesis show, most character creators are lacking in options for diverse characters.

In part two we will take a look at skin tone and hair, two areas that are very important in this regard
Read the second part here!

Authors: Ylva Ljungqvist, Frida Svensson
This article is a reworked edition, in three parts, of a study we made in June 2015.