A brief discussion of why we can skip story, but not gameplay. In fairness, I think we should just be able to skip everything.
Leanne Taylor
Blogger
July 23, 2012

[This entry has been cross-posted from my blog here.]

Hi there. I’m a games writer, but I’m just gonna come out and say it: I hate dialogue in games. If I can’t skip it, I’ll ragequit. However, chances are if I do have the option to skip, I won’t. Why? Because I don’t like being told what to do with my time. You don’t control me, game. 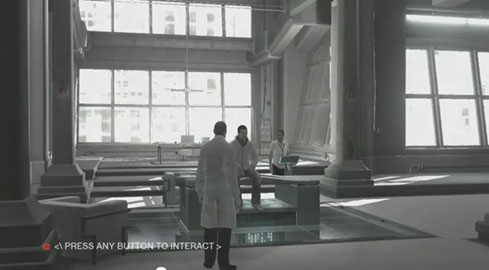 I sat at this screen for hours.
But you know, I can’t think of a single mechanic I haven’t hated at some point – combat, jumping puzzles, hidden object scenes… Man, I must really hate every single game out there. Unfortunately for my bank account, that’s not true. In fact, I’ve dedicated my career, and most of my life thus far, to games and making them better for future generations. Why? Because I love them. I just don’t love all of them, all the time.
Sometimes I want to jump on a TF2 server and W + LeftMouse Pyro, while continuously screaming for a medic. Sometimes I want to talk to an imaginary person in Dragon Age because, at the end of a long day, as least they’re predictable. And sometimes I want to be that cool detective who solves all the paranormal cases, so I load up Mystery Trackers and click through hidden object scenes like a Diablo player on crack. 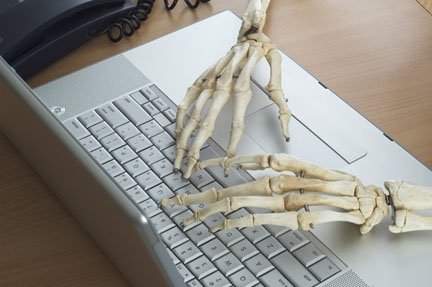 Stop hacking my account, Leoric!
And yet, I feel like I’m missing out. I don’t know the story of Halo, or Gears of War. I only know Dead Space and BioShock and their sequels because I have very patient friends. And, oddly enough, despite the crippling anxiety I feel while my friend Steve is calmly shearing limbs off nearby necromorphs, Dead Space 2 is one of my favourite games. I just wish I could play it.
The problem is, I suck at combat. It’s not for lack of trying, either. Playing Ocarina of Time with enemies that respawn every damn time I enter or leave a room drives me to throw my 3DS at the wall with alarming frequency. I’m just lucky my husband is a good catch (hur hur puns). If I could explore the Water Temple without worrying about random underwater bat-fish attacking my groin every time I try to navigate around this one set of spikes, I would be so much happier. 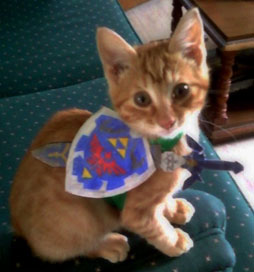 Pictured: What they should have replaced the Water Temple with.
There’s another problem. You know I love you, Fallout 3, but sometimes I just want to fast travel without having to discover the destination first. The same goes for you, Skyrim. I’m even an Explorer type (according to my idol, Bartle) but there are days when you just want to get to the dragon’s lair so you can shout at it until it dies. 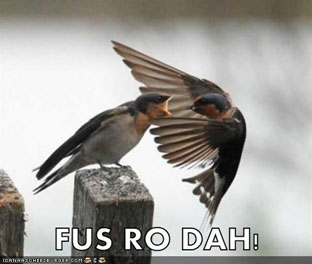 Children, this is what we call ‘conflict resolution’.
But none of those are the real problems. As the Escapist series Unskippable (which highlights custscences that force us to watch them) points out, sometimes you just have to let the player skip your hard work. My problem is that, so far, this only applies to storytelling.
Playing God of War 2, I died the most often because I misjudged a jumping or swinging section, at which point the game would mock me by offering to decrease the combat difficulty. Thanks. On the other hand, I’m in love with Super Mario 3D Land because it gives me the stupid invincible tanuki suit when I die too much. I usually die for the same reasons as I did in God of War – bad spatial perception – but at least I have a chance of recovering from a misjudged leap. And I sparkle, and that makes everything better. 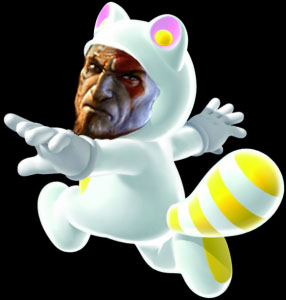 Have fun trying to get that image out of your head.
Hidden object games, in my opinion, have got the big games beat. Playing on casual mode, you can skip every puzzle, and if you can’t find most of the hidden objects by randomly clicking (if you really don’t want to look for them) you can just wait for the recharging hint, which will tell you, without judgement, where every single item is. You can even skip the story segments. What’s left, you may ask? Not a lot, but that’s what you get for playing the game like a jerk.
So why can’t I do this in other games? I would love the option to have a Fallout 3: Pacifist edition. If I could toggle a button for “short version, please” in Mass Effect, I might have gotten past the Citadel. An option to simply play a sequence containing the remaining story moments (i.e. all of them) in The Misadventures of P. B. Winterbottom would be nice. 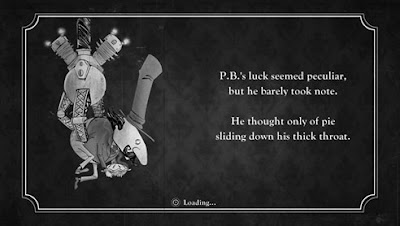 It’s sad when you have to Google still images from a game based on a silent movie to get the plot.
Don’t get me wrong, I understand. Dead Space 2 without the combat would be a very short – and somewhat weird – game. Alan Wake would be half the experience without the risk-reward motivation of finding those missing manuscript pages on Nightmare mode. But you know what these games would be? My choice.
I’m tired of missing out on all the good stories because I have the reflexes of a wet dishcloth. A very dear friend of mine worked on Halo: Reach, so I bought it and tried to play it. Guess how far I got. That’s right, I died in the tutorial. Repeatedly. Really.
Sure, I’m not going to get better without practice, but you know what? I don’t want to practice that. I’m just not good at some things, and that’s okay. What’s not okay is being forced to get better (or get better friends?) if I want to indulge my Nolan North obsession and play through the Uncharted series. Let me turn off combat. It won’t be the experience you wanted me to have, but we live in a post-modern society anyway. The death of the author has already been established. Let me play the version of your game that I want, even if it may as well be a movie. That’s my choice, not yours. Stop taking it away from me. 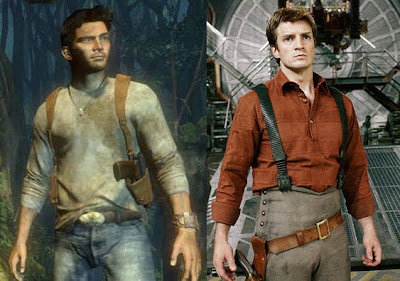 I am in for this, by the way.
The Futurama game on PS2 already did it. They included the game disk and a DVD containing all of the cutscenes and salient sections of gameplay to link them all together into one mini-movie. I ended up buying the game just to watch the movie. I never played the game, but they got my money, and I reckon they’d call that a win.
The point is, we can already skip most of the cutscenes and dialogue available in games. We’re still at the stage where we have to do the puzzles ourselves, but at least there are walkthroughs. There are no walkthroughs for sucking at combat or having poor depth perception. Even if causing all the Darkspawn to flee from my presence when I turn off the option for combat causes a Benny-Hill-style montage of foreshortened tactical retreats, I’m okay with it. Or what about allowing the game’s AI to take control of my character during combat in BioShock 2, even if it means I don’t always come out with the most ammo or the most health, but I come out alive? Both of these are still better options than what I could accomplish alone. Sad it may be, but that’s the way things have been for 20 years. I don’t seem ‘em changing any time soon.
So I vote that every game should include an Option D: skip everything. Make each standalone element fun or successful in its own way, then let me choose which ones I want to engage with. Who knows? If your combat’s as much fun as your exploring, I might even give it a try.
Get daily news, dev blogs, and stories from Game Developer straight to your inbox
Subscribe