Night Witches is an RPG about an all-woman WWII-era Soviet night bomber regiment. Despite subpar equipment and no small amount of sexism, they terrorized the Nazis all across the Eastern Front.
Simon Carless
Blogger
October 31, 2017

“Tonight, we fly,” I thought to myself, indulging a bit of drama as I looked forward to being one of four GMs for a mammoth session of Bully Puplit’s Night Witches RPG.

Actually, that’s a total lie. There was absolutely no equanimity, no “chill” that preceded my participation in this event at Big Bad Con--an annual indie tabletop gaming convention in California. Also, it was afternoon, not night.

Not only was the game’s creator, Jason Morningstar, one of the other GMs, but there were a grand total of sixteen people to manage. Four at each table, each comprising a “section” of our whole squadron of twenty four (each GM controlled NPC pilots as well). Though I was, obviously, responsible for my section (2-A, the fightin’ A!) I also had to manage inter-sectional drama and other players coming to me for RP with my NKVD officer.

I was more than a little nervous about taking this on, and wondering why the hells I said “yes” to this. 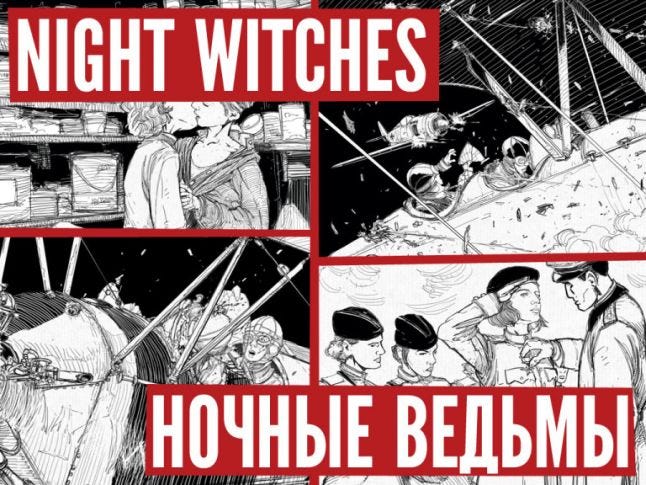 Night Witches is an RPG about the eponymous Second World War-era Soviet night bomber regiment, the infamous 588th. It was the only all-women regiment of its kind in the Soviet Union, and despite being saddled with subpar equipment and no small amount of sexism, went on to terrorize the Nazis all across the Eastern Front. Jason Morningstar has converted their story into a faithful, fascinating Powered by the Apocalypse game that manages to combine the drama of story-based RP with hard charging military strategy--cleverly managing to fold the latter into the former. All the while, you’re bombing Nazis (which is strangely controversial these days). 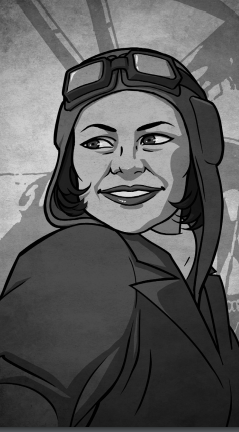 The eerily apposite subject matter aside, though, it’s a brilliant game and some of the most fun I’ve had with tabletop in recent years. And Jason Morningstar wanted to take its simulations to another level. He pitched the idea of a 16-player mega game to Big Bad Con, a four hour one-shot that would take the 3-5 player RPG and add enough players to roleplay a full squadron.

Big Bad Con is a charming, intimate indie RPG/LARP convention that’s quickly become one of my favorite events of the year, precisely because they experiment with stuff like this (or, as they did last year, LARPing in the woods around the hotel). People bring the big name RPGs to play--you can find a D&D or Star Wars game if you want--but the real draw is the sheer number of smaller games that get lost in the crowd of bigger conventions. No small amount of playtesting goes on here, as I’ve written about in the past. But this year I was just focused on being the best gamemaster I could be for this headlined event.

If you’ll allow me a tortured aviation metaphor, we didn’t quite stick the landing, but we ended up on the ground in one piece. There were no clear rules for how to manage play with so many people, but we all fudged it on the fly (so to speak), and it was a fascinating experience. Rather like the Night Witches themselves, we broke something and hastily reassembled it in an unofficially approved way so we could do what we needed to do.

In theory, each GM would be responsible for their Section, and occasionally field RP from other Sections as needed. I controlled a Regimental Politruk, a sort of Soviet ideological enforcement officer of the NKVD; these characters are epicentres of drama, as pilots are either snitching on each other or working to thwart aggressive and dogmatic investigations. Or both. Insofar as this sort of thing was concerned, we managed pretty well. For me the trick was to leave my Section with something to chew on when someone from another table approached looking to RP something--often, I’d either give them something that they had to hash out amongst themselves, or involve another Section in. Thus, to give myself the capacity to manage inter-table RP, I had to encourage my Section to RP with another table, thus proliferating the fun/logistical problems. But it was mostly fun.

"What fascinated me the most as a critic was the way the game, even more than is usual for tabletop RPGs, exceeded the written rules. We were flying beyond spec for quite a while. Yet, despite that, everything held together in the end."

Section C was known for being the misfit party animals and a member of my Section went over there to RP a rather steamy encounter with the Squadron Commander, both to pursue a relationship and resolve a logistical issue. This, of course, aroused NKVD suspicion when the Commander was increasingly cited for being lackadaisical in her duties and disrespectful of the People’s airplanes, while sweeping up a different member of my Section who’d started the game under a cloud of suspicion as she was the sole survivor of her last squadron. Rumors of saboteurs abounded and the Commander was clearly living on even more borrowed time than everyone else. Night Witches is a game where one tangled mess begets ten others, and at this scale it was a messy yarnball of spicy communist drama.

The game consists of day/night cycles, with daytime being very RP focused at the airbase, and night being the bombing run. We managed to get two nights in during the four hour period we were allotted, each of them a masterclass in brinksmanship. You were required to drop at least one bomb on the target, successfully, with the Regiment’s Major setting a target for total number of bombs dropped--necessitating more than one attack run, of course.

On a particularly difficult mission that required facing the enemy fire of a rival Nazi squadron before any bombing run, my first pilot rolled so spectacularly well that everyone felt compelled to drop that second bomb. And then the third. Each successive roll, of course, was worse than the last. Injuries stacked up, more and more bullet holes riddled the jalopy fighter planes, eventually an NPC died. Then, finally, one of my players died on landing--choosing to go out in a blaze of glory. And, of course, socialising the NKVD’s interest in her to the rest of her Section. 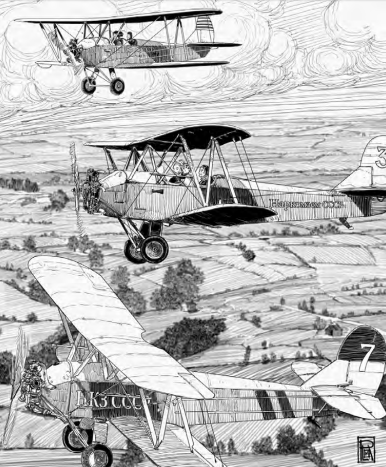 In the end, we all made it. As players, at least. As to their characters, a memorial wall was spontaneously generated as the casualties began to pile up, if that gives any idea.

What fascinated me the most as a critic was the way the game, even more than is usual for tabletop RPGs, exceeded the written rules. We were flying beyond spec for quite a while. Yet, despite that, everything held together in the end. The moves and stats were there when we needed them, but when we needed to be flexible to accommodate a number of requests, we could manage that. There were no strict rulesets for inter-table play, but we managed to make the whole Squadron work like a more-or-less decently oiled machine. We handled what we could, and when a very late addition to our gaming group became an additional NKVD officer, we colluded to share our duties and hand things off to each other as needed.

A recent article in The New Yorker, discussing the resurgence of D&D’s popularity, touches on what made this possible. “The emphasis, even these days,” writes Neima Jahromi, “is not on [statistical] forms but on moving beyond them.” The old war between “crunch and fluff” seems to have passed; we now stand amidst a fluffy renaissance. “The structures the designers made are also simpler and more subjective. If a player thinks of something clever, you don’t have to thumb through a handbook for a strictly defined bonus.”

It was, in the end, this sort of thinking that made that 16-player Night Witches game possible--and it’s endemic not just to Morningstar’s game, but to that of so many of his contemporaries (whose work I’m at pains to highlight in this column). Game mechanics, defined as elaborate codes and formulae, can be magical; but sometimes there’s no substitute for letting the player find their own way in collaboration with others. This remains something that only tabletop can do this well.

Leading my Section in a series of battles over Poland, I came to appreciate that. It was, in the end, why I was so nervous. I had the book, I had stacks of printed papers and maps, all the paraphernalia of tabletop gaming in glorious full-color. But I knew I had to go way, way beyond the printed page with my players. And, indeed, we had to. So many of our NKVD actions, aside from the “Informal Interview,” an actual move in the printed rules, were guided by our play rather than the book.

It was nerve wracking, but, in the end, we flew.