Opinion: Octobo wants to be your kid's best friend

Gamasutra contributor Katherine Cross checks in on the development of Octobo, a cuddly blue octopus educational toy from developer Yuting Su that's brought to life by the addition of a tablet.
Game Developer
Staff
March 29, 2018

GDC is often about homecomings, and attending for several years now I’ve had the joy of seeing creators grow, learn, and move from project to project, or watch games they’ve worked on slowly take shape.

In the case of one cuddly octopus, this year was a particularly delightful reminder of that. Two years ago I reported on an interactive teaching toy called Octobo: a blue octopus who teaches toddlers and young children how to read, brought to life by slipping an iPad Mini (or similarly sized tablet) into the plushie to provide a touchscreen surface.

The brainchild of developer Yuting Su, it’s now grown from a graduate school project to a fully-realized system ready for mass production, with a team of designers at her startup Thinker-Tinker. The original model I’d looked at was hand-stitched by Su’s mother. Now it’s been polished up, softened up, and debuted on Kickstarter, having launched just this week after GDC. As of this writing it’s already at nearly 20,000 dollars of its 50k goal.

There are similar kinds of toys out there--the obvious comparison being Teddy Ruxpin. A cute companion who interacts with your child as they read tie-in books. But Octobo is both more advanced and, crucially, better for snuggling than the hard plastic companions of old. 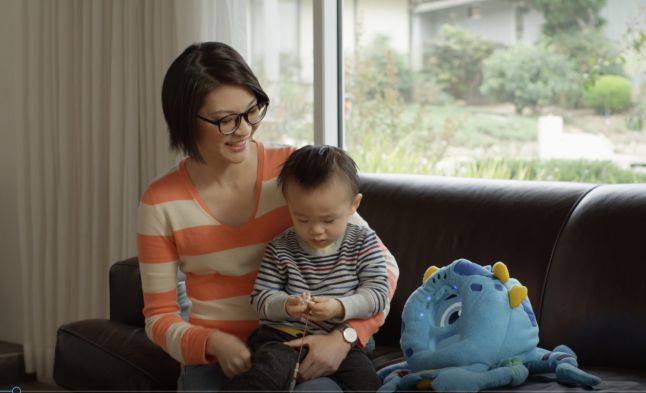 Su and her son (and Octobo)

I met Martzi Campos, a game researcher at USC Game Innovation Lab who’s acted as an adviser on the project, at the crowded Starbucks across the street from the Moscone Center to meet the new Octobo, who sprawled across one of the tables, oblivious to the threat of passing lattes. She showed off a variety of interactive features centered around touch and recognition of tokens--putting a letter in Octobo’s “bowl” to identify them, for instance. But the biggest change was in the octopus himself.

Back in 2016, when it debuted at Alt.Ctrl.GDC, I’d joked that I became a gaming critic to “review cuddle-ability” after describing how the Octobo prototype was a little too cardboardy to really get a feel for it. All that’s changed now. The new Octobo is a gigantic squish-ball whose tech is elegantly concealed beneath layers of softness. When you remove your iPad, it’s now entirely soft and amenable to being snugged and thrown around by your toddler. But even with the iPad inside, it’s still cuddlable and reactive to touch. Petting Octobo will make him very happy, for instance.

The iPad becomes his animated, expressive face, and it can be interacted with directly. If you put your finger near Octobo’s mouth, he’ll nibble at it. If you poke his eye, he’ll become upset. The latter, in particular, was an interesting little quirk that emerged from many discussions at Thinker-Tinker, where there was a desire to create a creature that could inspire empathy. “Hurting” Octobo has a consequence, generating feedback that suggests he doesn’t like it; by contrast, shaking hands (tentacles?) and giving hugs makes him happy.

In theory, it could be useful for teaching young children, in a controlled environment, how to respect people other than themselves.

The main focus remains on basic education, however. Pattern recognition (‘Octobo loves striped fish! Find the striped fish!’) or identifying letters and numbers. These are available in two books, with their own sets of tokens, which come with the Kickstarter launch: Octobo’s Underwater Adventure, and Octobo and the Great Letter Search. There’s also a cute spelling app that I got to try out.

Campos also introduced me to another creation of Su’s: Octobo’s world of Puzmo, a cutesy realm of other one-eyed anthropomorphic creatures (I prefer to call it the Octoverse, however). That kingdom of cuteness, which puts one in the mind of Hello Kitty’s world of friends, suggests the ambition behind this game. Part of what may make Octobo successful is his scalability, after all; more applications can be added, more stories can be written, more tokens created. The system is designed to accommodate age-appropriate content for children ranging from several months old to about 7 or 8 years of age--Underwater Adventure and Letter Search act as proofs of concept, as each is targeted at a different age bracket.

Even as an adult, it’s fun to do a wiggly tentacle dance with Octobo and make him laugh. The technology is certainly impressive, rather like Amiibo or Lego Dimensions, but with more expansive tactility. It is an accomplishment to make it all work while creating a toy children can really hold, making it akin to a living stuffed-animal.

I won’t lie, Octobo melts my heart. And amid a sometimes challenging and tense GDC, it was lovely to see this product of love and technical dedication reach a new plateau of success. If Octobo manages to succeed as both an educational game and an empathy toy, it’ll be a triumph.