No Good Deed - Narrative Design in Spec Ops: The Line

Narrative designer Richard Pearsey charts the narrative development of Spec Ops: The Line, explaining how the team set out to twist the knife of shooter narrative, from the pre-production process through the way the game was developed.
Game Developer
Staff
August 28, 2012

Narrative designer Richard Pearsey charts the narrative development of Spec Ops: The Line, explaining how the team set out to twist the knife of shooter narrative, from the pre-production process through the way the game was developed and, in the end, how the game's conclusion is left open to interpretation.

2K Games' and Yager Development's Spec Ops: The Line set out to be different. It would be a third-person squad-based tactical shooter, making heavy use of cover mechanics, but the game's focus on the intensity and immediacy of both the combat and narrative design, coupled with a desire to throw players into a disturbing, morally ambiguous world, were intended from the beginning to set the game apart.

VISION (September 2008)
A realistic military shooter set in a unique, almost surreal world, Spec Ops puts a twist on an established genre. The decayed opulence of Dubai forms the intriguing stage for an intense journey into the heart of darkness, facing you with the horrors of war, to bring down a charismatic and haunting villain.

EXECUTIVE SUMMARY (September 2008)
Spec Ops
is an intense third person military shooter with a dark and mature narrative. [...] The narrative gameplay confronts you with the horrors of war, as you face choices between bad and worse in challenging moral dilemmas [...]

JOURNEY INTO DARKNESS NARRATIVE (September 2008)
Brilliant, but deranged villain lures you into a world perverted by his madness. Wartime scenarios that challenge your perception of morality. Mature, thought-provoking story, inspired by Apocalypse Now.

It was important the game challenge and eventually subvert player expectations of the shooter genre. BioShock was a key inspiration in this regard. It was also -- not coincidentally -- produced by 2K, as was The Line.

Obviously narrative was going to be front and center in The Line. To accomplish our goals, it would be necessary to meld the game's narrative aspects as much as possible into the gameplay.

We wanted to blur the lines between gameplay and narrative, focusing on the overall player experience, and hoped to create a seamless player experience where gameplay and combat informed us as much about character development and story as did traditional narrative elements such as cut scenes and expository dialogue. 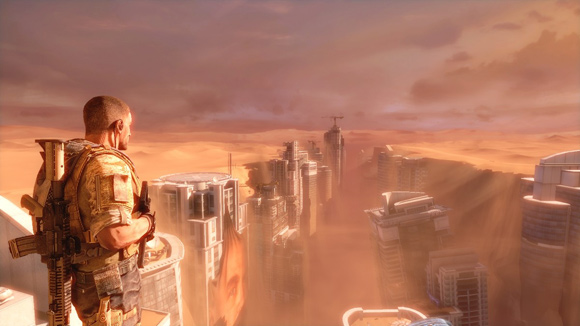 For this to work, the plot and back story would have to provide the necessary narrative space and emotional context for the team to achieve its goals. This meant the characters had to have room to grow and evolve over the course of the game. In addition, the story had to allow for player perceptions of the game to change.

The original plot called for the Delta Squad to be sent to assassinate a Colonel Konrad who had illegally led his battalion out of a war in Iran and was looting a recently destroyed Dubai. Konrad was more of a megalomaniac with messianic delusions than the rather sad and tortured figure he eventually became.

This is a perfectly serviceable setup, and a good shooter could well have been made from it, but for a number of reasons this setup was not compatible with our goals. It was overly complicated. Too much time would be spent explaining why there was a war in Iran; why Konrad mutinied; why he took his battalion to Dubai, as well as why they were looting Dubai. Konrad was the bad guy. We knew it; the squad knew it; and the job was to terminate his command. There was left limited room for our characters to grow or for player perception to change.

The decision was made to simplify the story, move thematically closer to Heart of Darkness (HoD), and have everything revolve around the storm, the game's proxy for HoD's jungle. "Going up that river was like traveling back to the earliest beginnings of the world, when vegetation rioted on the earth and the big trees were kings." (HoD)

The final backstory became: Konrad and his men were in the UAE for joint training exercises when the storm hit. They volunteered to stay behind and help. Dubai is wiped out. All are thought lost. Months later, a stray radio signal escapes the storm, and the squad is sent in to investigate.

The idea was to start small, convincing players they are playing one type of game, and then pile horror upon horror until at the end the game is very different than the one they began.

By turning the story into a mystery centered on Konrad's fate, we gave ourselves the necessary space to explore the themes outlined in the vision documents. This change made the environment central to both the plot and to character development, a key element of Heart of Darkness. The squad is no longer in Dubai on a kill mission; they volunteered for a rescue mission.

From the beginning, Konrad and his men are legitimately viewed as good guys, heroes, as is our squad. Now we had somewhere to go. We would be able to toy with player expectations, especially with the expectation/convention that in a military shooter, we are the good guy and anyone in our way needs killing.

We were less interested in telling a straightforward story than in creating a player experience with strong narrative elements. We created a linear game scenario that allowed for a variety of player experiences without narrative branching, and built it around a single question, "What happened to John Konrad?" Every mission answers part of or provides some insight into this question. All narrative elements from the storm, to the squad, to individual characterizations are built around this question.

We had two over-arching goals with regards to characterization:

1. The characters needed to feel and act like real people, especially in reaction to what they experience; and

2. They had to be changed permanently by what occurs in the game.

The Squad's character arcs would be reflected not only in cutscenes but in gameplay as well. As they moved through the game, experiencing the horrors of post-storm Dubai, the Squad would come to look, act, and move differently. The experience would affect them, and hopefully, in doing so, affect the player.

For each squad member, the team created three complete sets of combat barks, three different skins, as well as multiple animation sets. For Walker a variety of execution moves were also generated. Set swaps occur at predetermined times, and reflect each character's progression along his individual arc. These changes do not occur simultaneously. For instance, Adams is injured in a rocket attack that occurs at the end of Chapter 6 - The Pit. Both his skin and animation set change. He is scarred and bloody, moving with greater difficulty. Neither Lugo nor Walker undergo a change here. 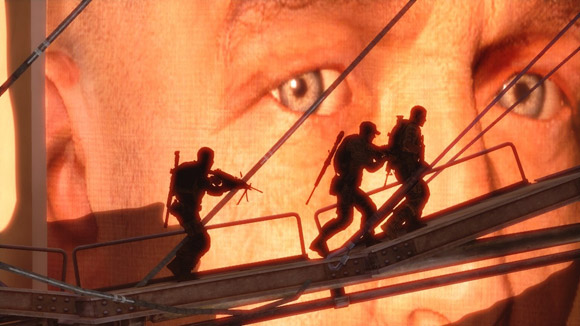 Walker's set swaps begin in earnest after the White Phosphorus incident when he discovers he is responsible for the deaths of several dozen innocents, something from which he never recovers. Walker will eventually become delusional and experience hallucinations that call his sanity into question. His reliability as a POV character will be cast in doubt.

By the time Walker and Adams reach the Ship Graveyard at the base of the Tower, the two are all but unrecognizable. Their communication is anger-ridden, ragged, and laced with profanity; they bear the physical scars of their encounters; and they move much differently than they did at the beginning of the game. Walker no longer calmly dispatches the wounded in a kind of mercy kill. Instead, he now violently and savagely ends them. The near-zombie who lumbers into the Tower is no longer the professional Delta Operator who led his squad into Dubai a few short days earlier. Hopefully, the player feels the weight of his arc as well.

Lastly, we decided to tie characterization directly to core game mechanics. Character is action, and this is doubly true in The Line, where for the most part, players use a single set of mechanics during both combat and narrative events. This features most prominently in the game's "decision scenes".

The "decision scenes" were designed to be scripted sequences players could interact with using core game mechanics. There were three possible categories of responses: deadly action, melee, and inaction. For instance, throwing a hand grenade might be treated identically to firing a weapon, as both are life threatening or deadly actions. Walking away or standing still are both treated as inaction. Feedback is provided based on player decisions, and there is some very minor branching in a few scenarios. However, the game's linear progression is never altered.

The plan was for the game's moral and ethical point of view to be ambiguous. The game would not pass judgment on player actions. We wanted players to ask "What do I do?", not "What do they want me to do?" Ambiguity, however, could not become confusion. What was happening had to be clear. Why individual events were happening, what they meant, or what players were supposed to do would, again, be left purposefully ambiguous.

A Final Word About Konrad

Konrad's arc is central to the The Line. The player experiences Walker's journey through Dubai, but in the end all roads lead literally and figuratively to Konrad. His character arc is The Line's backstory. He has one goal and one goal only -- to save as many lives for as long as he can in Dubai. The difficulty of accomplishing this in post-storm Dubai drives him mad.

Konrad is not Andrew Ryan. He did not set out to build a utopia. His world is improvised and reactionary. He stumbles onto a vision of what he believes is necessary to achieve his goals and in doing so creates a violent, savage dystopia. In this way he embodies characteristics of the Kurtz character from both Apocalypse Now and Heart of Darkness. Through the Radioman's monologues, we learn Konrad's personal hell is that he is aware of what he has done. By doing what he thought was right, Konrad made himself a monster and sees no way out. He wants the player to understand why he did what he did and seeks to justify his actions. This will be mirrored by Walker at the end.

Aside from the beginning and end sequences, we do not see or interact with Konrad. His arc is expressed primarily through voiceover and through environmental storytelling. The apparition we encounter at the end is Walker's wish fulfillment projection of his hero: strong, vigorous, in charge -- someone who can make sense of what has happened. The man we see in the penthouse at the beginning is the real Konrad, and in hindsight is clearly prepping for suicide. The question left open to interpretation is when this occurs.

When the Delta Squad arrives, Konrad faces exposure and humiliation and takes what he sees as the only honorable way out – suicide. In the end he literally paints a picture of the player's sins, presenting the player with the dilemma Konrad, himself, faced. What have I done? How do you feel about what you have done? For Walker and for Konrad, this is a life-and-death question.

In the end, The Line is not about ethics and morality in war or war games. The game raises questions but does not answer them -- because it is not about answers, but emotion. We wanted to affect the player and generate an emotional response to the game over and above and the adrenalin rush normally associated with shooters. We wanted to demonstrate that shooters could do more than just thrill, and to a great extent I think we succeeded.