Mobile gamers behaviors - where and how often we play mobile games?

In this post I'm trying to figure out what behaviors may cause gamers to play mobile games in various places and situations. I'm also researching for some numbers, and facts that has been revealed by mobile gaming companies.
Przemyslaw Szczepaniak
Blogger
April 17, 2013

Before our new game showed on market, we played it a lot to be sure that it is well tested. Tests took place in many stages of game development, in different places and hours. One day I took my smartphone, I launched the game to do another test, I laid on the bed... and in this moment a thought showed up in my mind. "I'm playing a mobile game in my bed, so my behavior is dictated by a specific habit, or an accommodation to a specific situation. Have there been any surveys or researches connected with behaviors of mobile gamers? Do we realize how often, and where we usually play mobile games?". Nearly after I asked that myself, I decided to do some researches to find the answers.

Nowadays, gamers spend more time with their mobile devices than in the previous years. The survey made by Mocospace with results posted at Venture Beat shows that 46% of surveyed played more often on their mobile devices than they did in the past.  One of most interesting facts which comes out from this survey is that most of mobile gaming is done actually at HOME.  Same conclusion came out of an article by mobile-ent.biz, where it is said that "... a new survey by PopCap games has revealed that an amazing 50 per cent of all US and UK mobile gamers regard mobile devices as their primary home game platform (...) The research also found that most mobile gamers say their favorite place to play is either on the sofa or in bed. No great surprise there".

Another conclusion that comes out of those researches is that mobile gaming is much easier and less demanding. We would probably prefer to comfortably lay down on a couch to knock off pigs in Angry Birds, rather than doing something more complicated (eg. sitting at a desk while steering the game with keyboard and mouse). Of course not everyone would agree, but in the case of mobile gaming this seems to be obvious.

So, where most of mobile gaming takes place? Mocospace did another survey among its users. Take a look at the summary below:

Apart from Mocospace survey, I found an excerpt from the Infographic by SponsorPay. Numbers shown there are different from those in Mocospace survey, but if we look closely, we can see similarity in gamers behaviors. In both cases most of mobile gaming happens at home, then at train, bus, work, etc. Of course there may be some differences, but both surveys were made in different environments and among different target groups.
Infographic by SponsorPay also shows frequency of mobile plays. It comes out that more than 50% gamers plays every day! Why is that happening? I believe that ease of mobile gaming causes frequent eagerness to reach for a smartphone to play. It is also caused by situations and places where we decide to have some fun (waiting for someone, being bored, riding in a bus, etc). Even if some gamers don't play every day, still they happen to have some mobile fun 2-3 times a week. 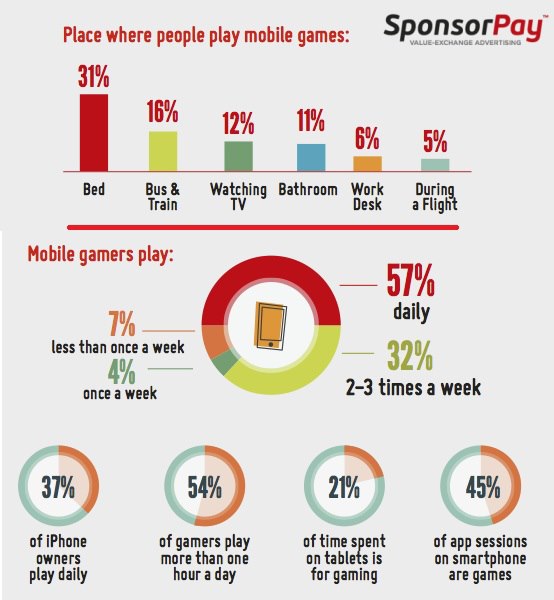 It seems that mobile gaming attracts, and holds our interest in much easier way. Gamers don't need to reach out for controller or keyboard. Fun is provided easily and effortless. Do I see a problem with such behaviors? Not really. Games don't need to be played on huge LCD screen to give a lot of joy. We can have some fun no matter where we are, we are just reaching to a pocket, clicking/tapping couple buttons, and we can spend our free time in more convenient way. IMHO those behaviors are a good factor. They show show that market, and demands are changing. Mobile is getting more powerful in a matter of gaming. Size, performance, 3D ultra effects, and places of gaming don't really matter anymore.