A comparison of the pacing of Stars and Moons in Mario 64 and Mario Odyssey
Nathan Savant
Blogger
November 27, 2017

Mario Odyssey sees us returning to the 3D Mario formula established by Mario 64, but how has time changed the way Nintendo designs its Mario games? Let’s take a look at the mechanics and pacing of Stars and Moons in the two games and figure out what has changed in the last 20 years.

Mario 64 was a game trying to define itself in a completely new dimension. Nintendo took cues from puzzle box toy design, and adapted those concepts to a 3D Mario title. This led to the inclusion of Stars, rather than relying on players simply moving from one side of a level to the other, as was the standard in 2D. Stars play the role of the articulation points you find on a puzzle box, each press, twist, or move leading you closer to solving the “puzzle” that is each world. The worlds would unfold, much as in a puzzle box, upon finding a star. This would reveal new areas and allow further exploration, which allowed player to find yet more stars. The levels were designed as 3D dioramas to further benefit from this point, meaning that rather than exploring a natural environment, Mario was running around on a toy. Once Mario popped out of the painting, he would return to the real world, where he would explore a more natural environment before plunging back into a toy box once again. In the case of one level, Big Boo’s Haunt, the toy box is a literal object that you find in the world and dive into.

Mario Odyssey takes a completely different approach. Rather than looking at toy boxes, Mario Odyssey expands upon previous 3D games and the concepts learned in each. The levels are designed to emulate specific worlds that Mario is visiting, and the landscapes found are a little more natural in their flow. Rather than being an easily-digestible diorama, each level is a sprawling landscape, and you may never be able to see the whole at once, nor are you intended to understand how each piece fits together. Instead, you are meant to drop into a land and explore the strange new culture there. The Moons, your collectible in this game, are no longer articulation points on a puzzle box, but rather replace the treasures you find while exploring a new place. Some are hidden behind progression locks, such as a boss fight, but others are simply waiting for you in a shop, or lying in a literal pile of garbage for you to stumble over. Mario Odyssey firmly states that the best way to explore a new country is take in every possible corner of that country, and it consistently rewards that exploration, incentivizing players to travel to even the most obscure areas of the level to find a moon.

Mario 64 features 120 unique stars. Each of them is a specific challenge for the player to test themselves against. The game progresses through a numerical lock system, each battle with Bowser being a reward for reaching a certain number of stars. The final door unlocks at 70 stars, leaving the remaining 50 stars as accessory, only required for completionists trying to reach the full 120 count.

Mario Odyssey features…… um….. A lot of moons…. I’m calling it quits at something around 530, personally. I’ve completed the game, beaten the bonus levels at the end, explored every kingdom and gotten every item I care to get. The game actually sells you moons, meaning that as far as I can tell there is no final numerical value of moons that you are rewarded for achieving. This game seems to be less about a test of skill, and more about exploring new lands until you can leave fulfilled, whatever that means for you. I’m sure there’s some specific reward for unlocking every moon, but when each world can have 70+ moons, I get fatigued and feel no motivation to collect them all. Frankly, there are so many bonus levels in Mario Odyssey that seeing one more for collecting every moon couldn't possibly be as rewarding  as it would need to be to motivate me. That’s my personal style, you folks feel free to enjoy your 100% runs.

But that in itself is what I find interesting about these two games. Mario 64 is a mountain to be climbed. It is a challenge to be overcome. Every star in the game tests you on a specific skill or interaction. I charted out each star in Mario 64 to better understand the type of challenge each star offers, and how that challenge changes from level to level over the course of the game.

As you can see, the game starts off being primarily about exploration, learning to navigate the game, and ends primarily being about testing advanced skills. Jumps become more difficult, levels more punishing, simply progressing through Rainbow Ride is a difficult experience.

Odyssey is not that mountain. While the star types available in Mario 64 are still present in Odyssey, there are also several new varieties. Stars that reward you for shopping, or talking to NPCs, or even just for walking over a particular spot. Odyssey isn’t a mountain to be climbed, it’s the mountain, the base camp, and the mall in the town that sits nearby full of people who have never even considered the idea of climbing the mountain.

Mario 64 challenged its players to beat it, but Odyssey just wants you to have fun along the way. Where you end up isn’t important, it’s the journey.

So now, let’s switch gears a little and examine that journey. I want to compare the level layout of a Mario 64 level with a similar level in Mario Odyssey. I’m going to choose the two first levels for this, but with a caveat. I’m not going to look at Cap Kingdom, because that kingdom effectively serves as Odyssey’s version of Peach’s Castle, allowing the players a safe space within which to explore the controls and get the feel of the game. It’s not a direct comparison, there IS stuff to do in that space, but it’s not a full level either. Instead, I’m going to look at Cascade Kingdom and how it compares to Bob-omb Battlefield. 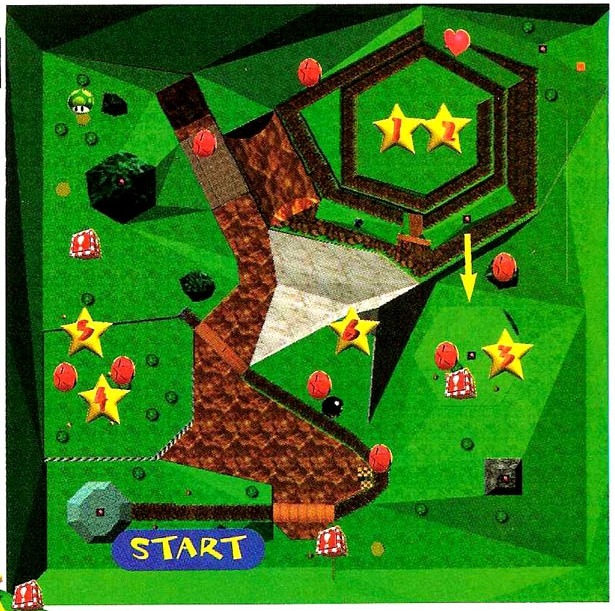 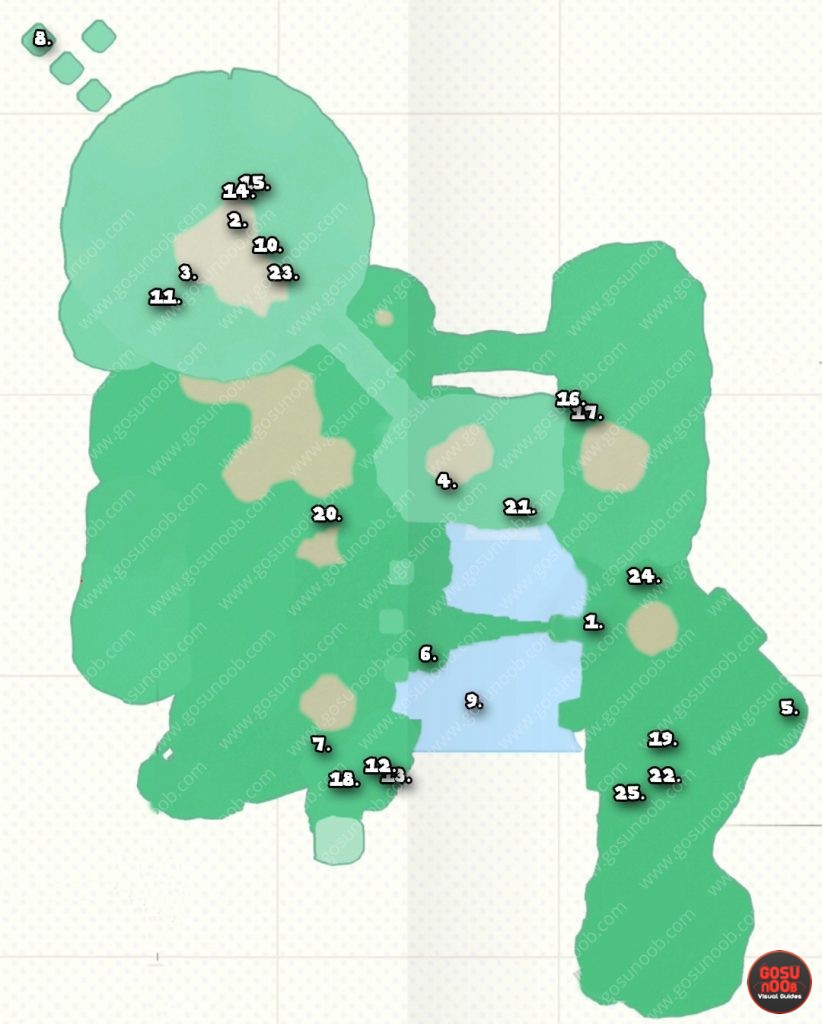 Mario 64’s first star is at the top of the mountain, in the hands of a giant bob-omb king who you must defeat. The level has you traverse a complex space filled with an assortment of traps and challenges that you must overcome before reaching the top of the mountain. There is a giant chain chomp, a number of goombas, and a spiral staircase of rolling boulders all trying to stop you from reaching the top. Once you do, you are challenged by a relatively simple boss fight that teaches you the mechanic you’ll need to beat the game’s recurring boss, Bowser.

Those of you who have played Odyssey might already see the similarities. Cascade Kingdom’s main task is marked for you at the top of the area, a floating platform above a large island. There is a giant chain chomp, a field of a new type of mini-goomba who sprout out from the ground, and then a zig-zagging 2D “staircase” that you must ascend to reach the boss fight. The boss fight is also an introduction to the game’s recurring bosses, but it’s an introduction to the second of four rabbits, not the first, so it doesn’t quite pack the same punch.

The main difference here is that the boss star in Odyssey is a triple moon, not a single moon, and that it won’t be the first moon you get in this level. When you start Cascade Kingdom, your first goal is roughly 50 feet in front of you, at the gateway between the area where you land and the rest of the level. The game has you take control of a chain chomp, this level’s core mechanic, and break open a wall. This unleashes your first power moon. At this point, you are given the task to continue climbing the mountain, and on the journey to the top you have the chance to get a number of other power moons. This early moon emphasizes the pacing you’ll see throughout the rest of Odyssey, where power moons are not the destination, but objects along the road. To further that point, upon completing the boss challenge, the rest of the level opens up. A number of new elements appear in the level, ready for you to continue your time here if you so choose. Notable, for our comparison, is the presence of a koopa race near the start of the level, echoing the second star in Mario 64. Also notable is the fact that this is where the similarities basically stop. Bob-omb Battlefield’s next star involves a cannon mechanic that isn’t present in Odyssey (at least not in the same way), and while there are loose similarities in other power moons, none of them are as obviously inspired by Mario 64. Incidentally, by the time you run out of similarities, the game urges you onward into the next level.

Mario Odyssey is happy to provide nods to its predecessor, but very quickly moves on to find its own cadence. Which of the two games is better will only come out in time, as we see how Odyssey appears once the shiny newness wears off, but regardless of its final reputation it’s quite an interesting game to study, thanks to its myriad of new mechanics, and perhaps even more for its old mechanics. A game that borrows from its past while making a new statement about the joys of travel and experiencing something new.

And with that, I’ll leave you to contemplate these two games. What other similarities have you noticed in the two games? What do you think Odyssey should, or should not, have borrowed from Mario 64? Comment below, and thanks for reading!