Making repeated deaths a reward in What Remains of Edith Finch

In most games, death is associated with failure, or a narrative break that forces you to reattempt a challenge. What Remains of Edith Finch turns death into a key feature of story progression.
Phill Cameron
Blogger
April 24, 2017

What Remains of Edith Finch, out this week on PS4 and PC, has a distinct macabre beauty. It is a series of vignettes about how members of a family have died over generations. It’s a dark premise, but rather than simply capturing moments of dread and despair, each weird tale is also full of moments of joy and surreal beauty.

In most games, death is associated with failure, a break in the narrative, and a doubling back to reattempt some challenge again. The new game from Giant Sparrow, developers of the 2012 game The Unfinished Swan, is different. Using carefully constructed vignettes, simple intuitive controls, and a single setting that opens up in surprising ways, What Remains of Edith Finch turns death into a reward, and a key feature of story progression.

Though you are playing through the final moments of a person’s life, What Remains of Edith Finch is largely a game about exploration, our innate human curiosity, and how quickly we can be overwhelmed in our pursuit of the unknown. It’s a game that revels in surrealism and those unpinnable spaces in-between.

“The primary inspiration was what it feels like to be out in nature in places that are simultaneously beautiful and overwhelming,” Giant Sparrow’s creative director, Ian Dallas, explains. What Remains of Edith Finch was initially pitched as “a game about the sublime horror of nature.”

“Originally, the clearest image I had was of scuba diving as a kid growing up in Washington state, and the way the bottom of the ocean looks when it retreats into potentially infinite darkness. Being in this place that is both beautiful and a little bit unsettling.” Dallas reflects. What resulted from that distinctive memory, that shift from familiar waters to the unknowable, inspired the game’s overarching themes of exploration.

At the same time, a lot of these stories are derived from the experience of video games themselves. “Players get very focused on goals and pursue them to the exclusion of everything else and . . . most of these stories ended up following that line where the character in the story has a similar problem of getting focused on one thing and then everything else in their world kind of falls away as a result of it. And that was in part just driven by playtesting and seeing what it was that people did and did not want to do,” Dallas says.

One of the stories, which has been showcased at conferences over the past few months, is a prime example of this desperate chase. Molly Finch, a little girl who’s sent to bed without food, grows desperate for something to eat. She nibbles on some hamster food, before her blind quest for satisfaction leads her to downing a tube of toothpaste and holly berries, a poisonous cocktail for a small child. Reality ultimately falls away, as Molly begins to dream of hunting a bird as a cat, a rabbit as an owl, a shark in pursuit of a seal, a ravenous monster feasting on humans.

Much of the game’s tension is driven by our knowledge that these characters are headed on a crash-course, our actions leading them down that path.

“I think what we have come to identify as the kind of canonical Finchian moment is the moment when the player realizes, ‘Oh my gosh. I am about to die. I can see my death approaching, but I am enjoying this and I want to keep experiencing it, so I'm going to march happily towards my doom’,” Dallas says.

In a sense, it’s almost antithetical to the way games are normally played. Rather than being the ones in control, players are meant to reconcile with the fact that they’ve embarked on a journey that can only end in disaster. Yet we’re captivated, regardless.

“A lot of our stories now have that kind of moment where you realize, just before the end, like ‘Oh, I know what's about to happen, but I can't look away.’” Dallas suggest.  “And a part of that is that we've hopefully set up a space where players don't feel like they're being penalized for this. There's something wonderful on the other side of that door and you get to step through it. But there's also a sense that there is no other option.” 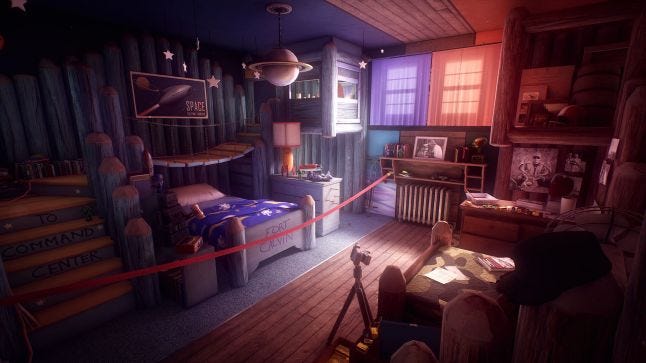 Dallas feels that video games are the perfect medium for conveying this sort of story. What happens in that liminal space between life and death, and what lies beyond, will likely remain a mystery for the rest of human existence. Video games, he says, allow us to explore things we would never be able to in real life.

“I think as humans, we're hardwired to wonder about this thing that we can never know about. One of the things that really distinguishes our species is this burning curiosity,” Dallas says. “But that curiosity meets its end point in death, where there's no way for us to know so we're infinitely curious, unendingly curious -- there's no way to satisfy that curiosity. It's curiosity that can never be satisfied. This game is about trying our best to satisfy it.”

What Remains of Edith Finch attempts to accomplish this in part with its minimalist control scheme and environmental design. “We want the game to feel broadly like you are falling down a rabbit hole or that there's this kind of unending series of bizarre, unknown experiences,” Dallas says. That doesn’t necessarily mean throwing the player in headfirst without any explanation. The game centers on the eponymous Edith Finch, who returns to her family home to learn more about her ancestry. The segments featuring Edith exploring the house act as a foundation for the smaller stories that spiral out from the building’s many bedrooms. In other words, Dallas explains, “It provides structure for something that is otherwise a bit amorphous.” 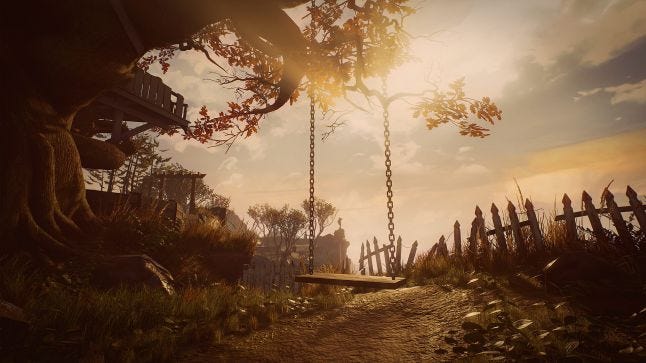 The game relies on merely three input methods, though their uses may vary depending on the story you’re playing and they’re not always immediately apparent. A major part of the game is exploring to satisfy your own curiosity rather than achieving some sort of win state. Dallas wanted to put players in a place where they’re not sure of what they’re doing, but they have a desire to learn more. He notes that the team wants players to keep a “beginner’s mindset.”

The simple control scheme was built to mimic real life motions. While they’re aren’t instinctive to people who play more traditional games, they’re still easy to get the knack of with some quick experimentation. You mimic the motion of propelling yourself on a swing -- kicking your feet, in and out -- by moving the analogue stick up and down. The controls were designed to evoke an experience, according to Dallas, and play a large role in gameplay design in general.

“We start from the experience and work outwards. And then once we had that working, when we had a satisfactory progression and ending just strictly in terms of the mechanics, then we worked backwards from that and [thought about] what would be an interesting story.” 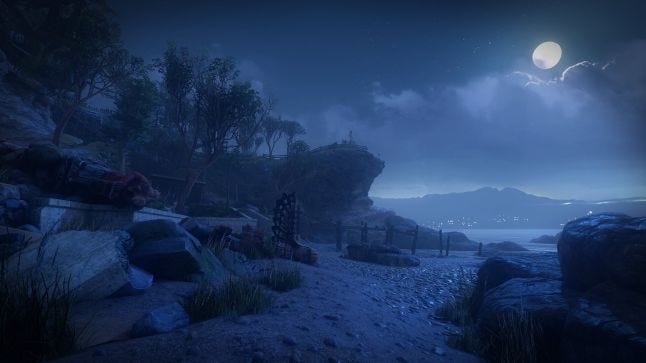 The biggest challenge for the developers was juggling all of these unique mechanics, and really nailing what each of these individual experiences feels like to the player. The stories then fell into place from a number of sources. Some, like the story of a person flying a kite, are purely mechanical in origin, as, in the early stages of development, Giant Sparrow worked to replicate real world experiences in a video game. “In that case,” Dallas says, “the story started from what does it feel like to fly a kite and what would I like to do, and where might that go that would be interesting.”

In other cases, like the tale of Molly Finch, the image of a shark flying among the treetops in a forest, came to Dallas while he was driving. That particular vision, to Dallas, was reminiscent of other elements found in the game.

“The forest and the shark are these beautiful natural entities that would never be together, and there's something kind of ridiculous about that whole thing,” he explains, “ And that's something that we tried to preserve throughout, the ridiculous nature of being a human.”

All of these disparate pieces come together within the Finch house, which almost seems like a living being itself. “The house is a way for us to make the story of the family concrete and to show a little bit of the history of that family through the architecture,” Dallas posits.

What started as a traditional, two-story home has morphed into a towering monstrosity, with floors and rooms tacked on willy-nilly thanks to a bizarre Finch family tradition. Whenever someone dies, their bedroom is shut, acting as a momentum or tomb for that individual. Naturally, as the generations come and go, they run out of room.

“By the third or fourth or fifth floors, things have gotten pretty weird. It kind of parallels the experience of those generations as well, and for us it was a way to speak to the contrast between the human world and the natural world. I'm really interested in the kind of in-between spaces where one thing transitions into the other.” 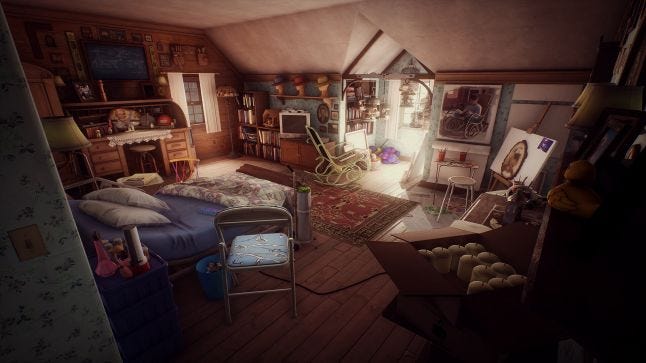 Dallas suggests we can see that sort of limbo represented in the house itself, and it slowly grows into some natural, monstrous being. Even textual cues reflect the way civilization and nature blur together. As a character speaks, text sometimes appears in the scene, though the letters shift and wriggle, almost like a school of fish. “This in-between thing is I think a lot of what the game is about,” Dallas says.

Even What Remains of Edith Finch’s design process is representative of this theme, too. The mechanics, which come about first in the game’s development, is normally a deliberate, ordered process. As the story weaves itself around the gameplay, though, it eventually morphs into these bizarre tales of people on the edge of destruction or who abandon civilization for the natural world.

“I would say all of the stories develop like a cancer. It's just this one crazy thing that gets out of control and then hopefully we can reign it in to be, in the end, something that feels like this benevolent thing that we're giving to players, and not a  virus we're infecting them with,” Dallas says.

What Remains of Edith Finch is a game whose themes ripple throughout its entirety. It is a strange beast, a surreal look at life’s oddest moments. From the simple act of hunting for prey or flying a kite, the game challenges players at all levels to explore a part our lives that is equal parts terrifying and fascinating.