Making Insomniac's Spider-Man do what a spider can

Insomniac Games' Ryan Smith talks to Gamasutra about the game design foundations of Marvel's Spider-Man (and how far back in Insomniac Games history they go).
Bryant Francis
Senior Editor
October 08, 2018

And while it's easy to credit the wall-crawler's worldwide fame as a big part of that success, the work Insomniac Games has done polishing every minute of Spider-Man's adventure is worth remembering as well.

Recently, we were lucky enough to be joined by Insomniac Games game director Ryan Smith to talk about the development of Marvel's Spider-Man, and learn more about the process in making Spidey feel like a genuine superhero.

Whether it's the incredibly dynamic wall-crawling or building a New York in need of a champion, we wanted to know what Insomniac did to fuel their Spider-Man with great powers, and an even greater responsibility.

The swing is the thing

Smith's perspective on Marvel's Spider-Man starts from the fact that, no matter where the story goes or what villains Spidey squares off with, players will spend most of their time in this game doing one activity: swinging. Spider-Man's unique traversal system has long been a draw in the various Spider-Man games made over the years, but for Smith and his colleagues, this pendulum-like movement would be the root of all their work. 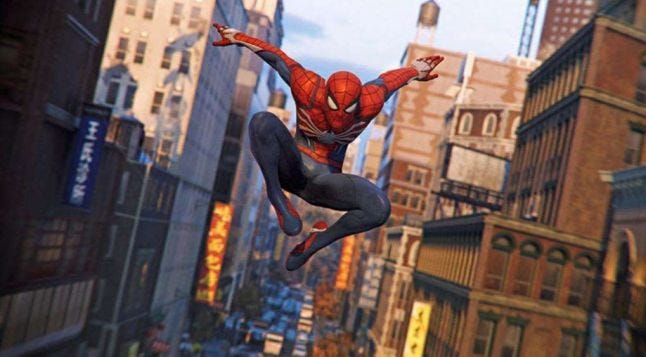 Smith starts our conversation by explaining that the pendulum movement came first and foremost. As players hold down the right trigger, Spidey looks for an object nearby to shoot a web at, then swings down, then up to continue his forward movement. Right away, Smith says this flow creates visual and spatial differences that set the game apart from Insomniac's last open-world title Sunset Overdrive.

"There’s also a difference in feel in terms of the speed that this character moves, the grand motions you make when you swing," says Smith. "So you actually look at the city in a very different way: you’re looking at it a little further off in the distance." 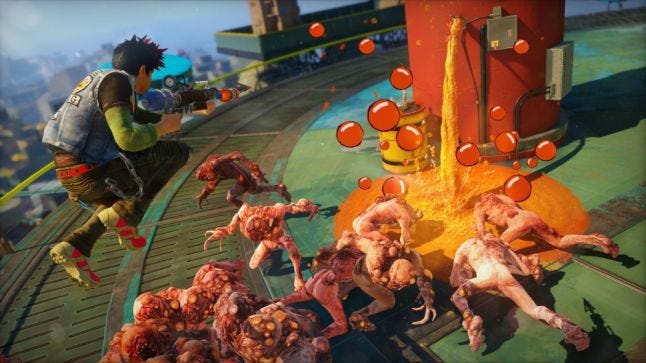 From there, the gameplay team needed to determine what would happen with each point in the parabolic arc where players could release the rope. "We looked at, on the swing, not just how does it feel to be on the line, but where are those right points to let yourself off the line and how can we make that a little bit of a game mechanic?" explains Smith.

This led to a decision to give players more decisions to make in traversal. Pressing jump at the end of a swing can launch them forward, but choosing to release earlier in the swing can send the player's vector downward, changing direction toward street level.

Next, Smith pointed out the importance of "speed cues" in this crafting process. Examples include the motion blur from a straight dive down, or the slow-moving buildings in the distance while players zip through the foreground.

All the while, these movement systems (which include a handful of non-swinging moves like zip-lines and leaping systems), are fueled by hand-crafted interactions in the Insomniac Engine. To Smith, game physics are useful for collision tests, but when Spidey takes wing, it's more important that "custom hero states" drive the swinging and moves.

An Empire State of Mind

The open world of Marvel's Spider-Man might be better described as an open metropolis. It's a scaled-down version of New York City that mushes together notable landmarks like Wall Street and Trinity Church (which is detailed so finely you can swing by the grave of Alexander Hamilton, as seen below). Unlike a lot of recent open-world adventures, Marvel's Spider-Man doesn't confine its hero to specific zones and then shuffle them along into new areas as the story progresses. 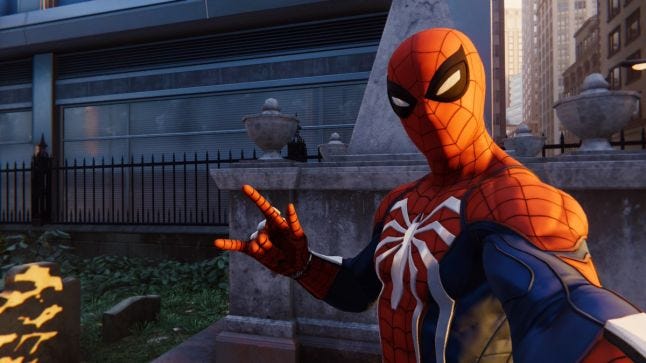 Instead, it keeps the city open, and uses a district system not only to organize its quests and activities, but also unique flavors of gameplay that keep the swinging from becoming stale.

"Also if things are always consistently---'I can just press one button and just drive through the whole city,' then that takes away some of that player engagement and that sense of flow and involvement," Smith says. He compares three of the game's districts and their architecture next. "The Financial District has really tall skyscrapers, Hell's Kitchen is maybe a little bit lower...we looked at real spaces, actually Central Park is a great example."

To build on Smith's point, a quick spin through the city of Marvel's Spider-Man shows the kind of detail he's talking about. In the Financial District, it's easier to get a higher altitude and make wide, sweeping swings between skyscrapers over the smaller buildings below. But when heading into Hell's Kitchen, the player is now caught more in the local grid of the city. When making navigational changes, they either need to follow that grid's path, or hoof it over the buildings and use more lateral traversal moves to move in the desired direction.

And when it comes to Central Park, it's a wonder Spider-Man can even swing through there at all. But Smith says getting New York's biggest natural landmark down was a big priority for Insomniac Games. 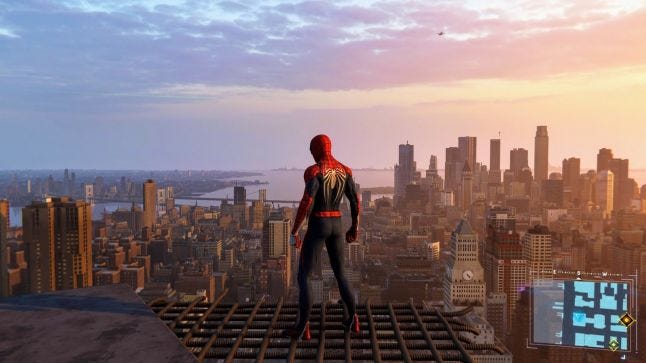 "You actually can swing through Central Park but we looked at those sections of the game that aren’t as natural as swinging off skyscrapers," says Smith." And we asked ourselves what feels right? Central Park, its central right? It defines the overall size of the island, it relates very directly to the whole shape and feel of it."

If this be Insomniac's destiny

During our discussion with Smith, one surprising caveat to our conversation was how much of Spider-Man's feel comes from all the games the company's produced in the past, along with its proprietary Insomniac Engine.

Smith points to two specific titles whose DNA can be felt in Marvel's Spider-Man in particular. The first is Sunset Overdrive, which is where Smith says the company learned about open-world traversal and shaping cities to improve gameplay. The second though, is the Ratchet and Clank series that Insomniac was previously most famous for. 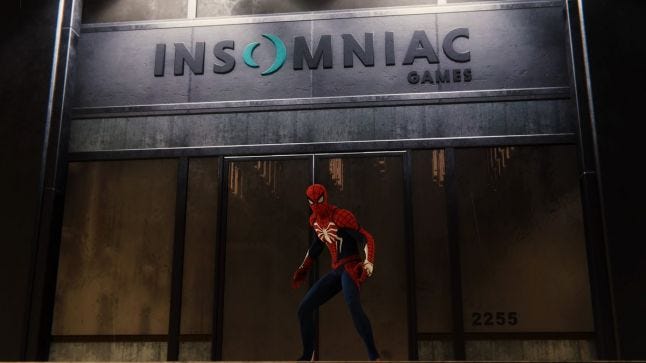 In particular, Smith discussed how the myriad weapons and gadgets that players touted in Ratchet and Clank drove the gadgets and powers that players pick up during the course of Marvel's Spider-Man. "That was something where we were able to leverage the experience we had building [Ratchet and Clank] weapons and awesome gadgets in previous games to integrate that into combat."

"We knew that was a way that we could have players could express themselves and they’re gonna be still hopefully discovering different ways gadgets combined together and different strategies for taking guys down."

Smith describes working with the company's proprietary engine as "part of the Insomniac DNA," and says using the engine helps his team set audacious goals for the game's streaming budget and graphics. He adds that it also affords his team the ability to create custom workflows and tools that best fit their workflow.

"We were able to leverage the experience we had building [Ratchet and Clank] weapons and awesome gadgets in previous games to integrate that into combat."

Unlike the development process for Sunset Overdrive, Smith says that Insomniac Games didn't rely on internal game jams this time around to prototype dramatic new ideas. But he does say that a lot of the game's niche features, like a photography mechanic and subway station-based fast travel system, came from a similar instinct of random team members pairing up to implement a unique design idea.

Per Smith, both systems solved problems that were occupying the design team at other levels. They knew even with a fun traversal system, players would still want to zip around the map, and even though exploring the city was meant to be fun, Smith and his colleagues wanted ways for exploration to feed back into the combat system.

Thanks to team members collaborating together though, both the subway system and the "landmark photo" mechanic were hashed out, letting Insomniac put a Spider-Man-flavored spin on traditional open-world systems.

"It takes a village," Smith told us as we closed out a conversation. But if the success of Marvel's Spider-Man is any indication, it's helpful when that village has a history, elders, specialists, and a known tool as well.