One of the most memorable features of the recent PlayStation 4 title Horizon Zero Dawn are the sophisticated robots, known as Machines, that wander the game world like a natural part of the landscape.

They are clearly automatons, with all their inner workings plainly visible. But they also exhibit unmistakable animal-like behaviors and movements. These Machines are a key feature of the game's unique primordial futurist milieu.

How were these distinctive robot/creatures conceived of and designed? We talked with several devs from Guerrilla Games, the studio behind HZD, to see just what went into the making of the Machines.

At the start of the design process, the team queried local Holland universities, including the Delft University of Technology's robotics department, for assistance. (Among the insights gleaned -- far-robots would potentially be 3D printed.) One question the developers posed: Are there areas of nature that could be improved upon?

"Skeletons, they told us," says Jan-Bart van Beek, studio art director. "Skeletons are kind of shit, because they're on the inside,  surrounded by very soft tissue. And it's a single point of failure -- if your leg breaks, you're pretty much dead as an animal." 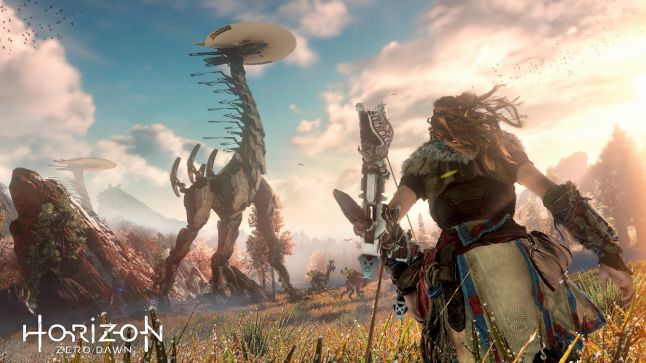 Instead, the profs suggested the possibility of something more like exoskeletons to the team--think lobsters, not humans, and you've got the right idea.

"If you look at some of our robot designs, you can see the outside has sort of a metal framework, and there is soft tissue on the insides, which also creates a convenient soft spot for arrows to be pumped into, " van Beek says.

"All these things came from the inspiration of the robotics engineer explaining to us how they would build a robotic T-Rex if they had to do that," he adds. 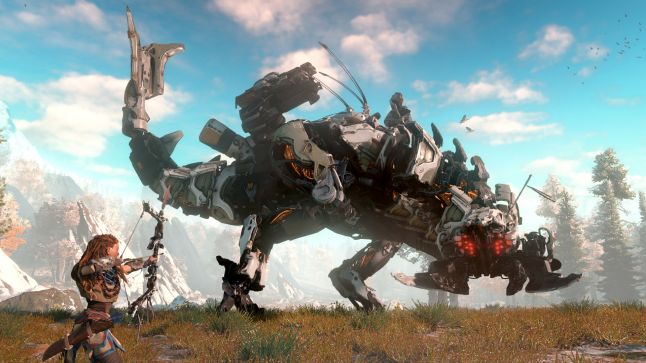 Originally, the machines weren't intended to have such animal-like movements. The team initially made the machines behave in a way that was more, well, mechanical. "It felt too much like a bug, like it wasn't moving the way it should be moving,” says Richard Oud, lead creature animator.

To bring the designs into the game -- instead of waiting for a perfected model -- the team would take unpolished models directly from ZBrush, slap a skeleton in, and bring it right in. Even if it was running at a slow FPS, it would give them some idea of the creature.

"You had to have big tough ones that were fast and deadly, and you also wanted ones that were easier at the beginning of the game," says Blake Politeski, machine designer.

"And at the same time, we needed to find ways that these would fit in with the fiction of these sort of robots that are maintaining nature. They're part of nature, so it had to fit with that narrative as well." 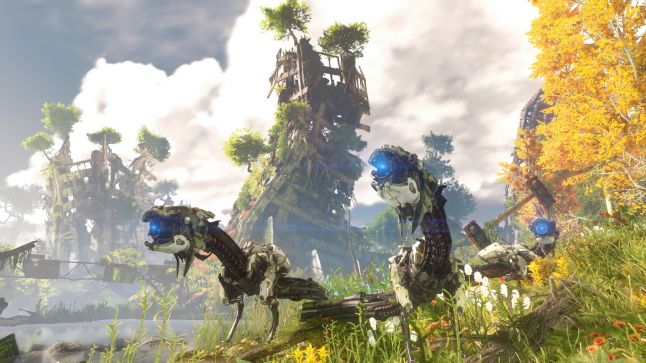 The modeling was in and of itself a colossal task. It took "man years" of work, and van Beek believes that it took five modelers around eight months for the T-Rex-like Thunderjaw. And that was just on the modeling end: it was around 18 months from the initial sketch to get it working and enjoyable in-game.

Despite the work, the team had a "realization that if we would nail the Thunderjaw, we would sort of know how to make the game," van Beek says.

And to dial in how these robotic animals should move, the team even pulled in Dr. Stuart Sumida, who has done anatomical consulting on myriad projects including films The Lion King, Dinosaur, Hercules, and Harry Potter, and Disney World's Countdown to Extinction and Expedition Everest rides. Oud also took a several month long course focused on animal and creature animation, as well. 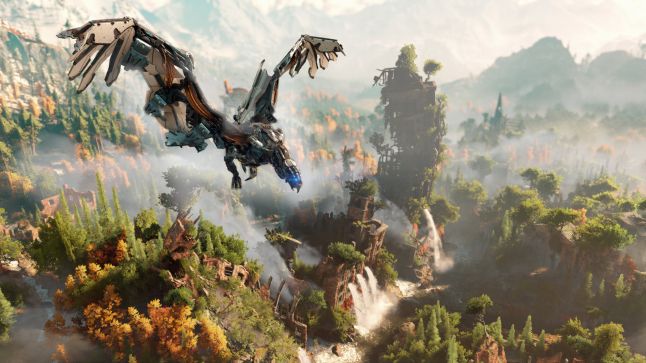 Balancing the design of the animals with their in-game functions was another challenge, especially in terms of the visual complexity of the machines.

"There was always a risk maybe that it would just overload everything, you'd end up with a Christmas tree problem, where you have all these kinds of blinking lights and different colors and you'd actually have no idea what's going on anymore," van Beek says.

Animation and design worked together on this issue, so that all of the various machines' gameplay elements were kept intact, while also keeping it clear to the players what they were there for.

Weight was also a challenge. The bigger things are, the harder they fall, as they say. But it also tends to mean the slower they move. Dennis Zopfi, lead machine designer, mentioned this difficulty in the Behemoth in particular.

"From [an] AI and animation point, it was very hard to get right ... you can't make the thing turn too fast, because then it loses its weight," Zopfi says.

"But if it cannot turn fast enough then, because the player's very agile and athletic, so the players run by very fast and we had a lot of issues with making it look right but also making it responsive enough to deal with the player."

Conveying weight to the player was a combination of factors, including the sound, animation, particles, and how the camera shakes.

"There's lots of subtle little things maybe that can make a bunch of polygons colliding with a bunch of other polygons sort of look like a real thing," van Beek says.

Guerrilla Games shared a series of images and videos with us that show the process of creating one particular type of Machine. Specifically it's the Longleg, a flightless avian robot that's somewhat reminiscent of the extinct apex predator known as "terror birds." 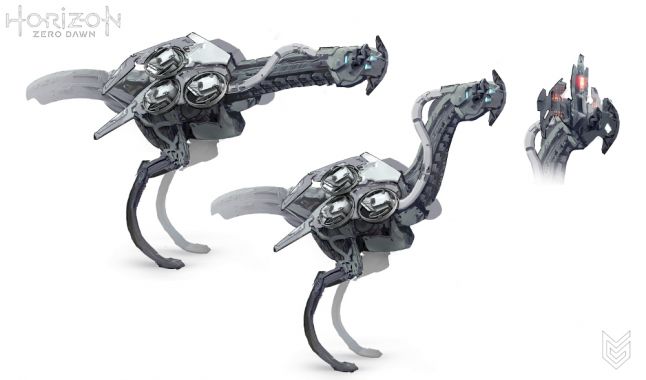 1. Visual concept art of the Longleg 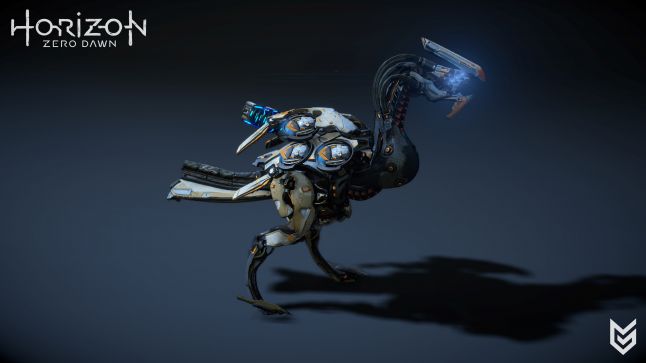 2. Final model of the Longleg

3. Animation rig of the Longleg 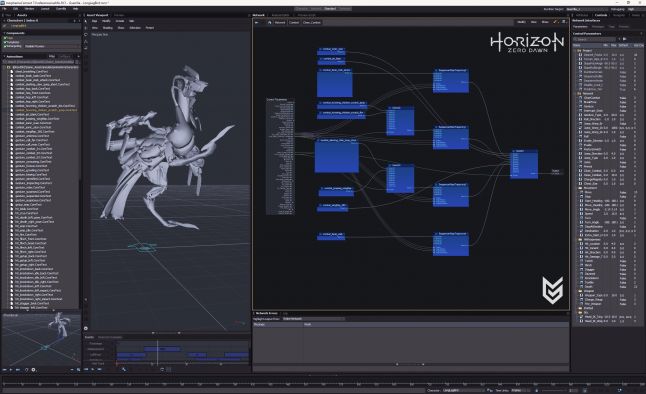 8. The end result: Longleg in the game

Looking back at the team’s past work -- like the giant spider-like MAWLR in KillZone 3 – brings into perspective just how quickly gaming technology continues to improve.

"That was incredibly complex at the time," Politeski says. "And I remember thinking, 'Oh my God we can't do anything bigger than this.' And then I look back now and it's like, even our most basic robots overshadow that a lot. The amount that goes into each of these and how technically detailed they are and how complex they are is not really going to be seen by the players. But  to me, it's actually amazing how big and complex these things are, and how we somehow managed to get it all working together."