This article is a breakdown of the game June's Journey (ios/ android). I have recently picked it for its successful live ops and content execution. This breakdown focuses on the core game play and the other supporting aspects.
Game Developer
Staff
April 24, 2020

June’s Journey is a natural extension and successor of Wooga’s Pearl’s Peril with more features and enhanced gameplay. Player’s objective is to point and click all the listed hidden objects in a given scene. Completing each scene's requirements like clues and stars requirement progresses the player in the game. On the other dimension the players will build the island with the decors and resources acquired from playing and completing the scenes.

Game is targeted towards female players aged around 48+ in casual space. With daily revenue around $46,541 ( Source: Think Gaming ) and $ 1.1M Monthly the game is currently at 129 in the top grossing category.

June’s Journey  core game is the Hidden object scenes propelled with the island building meta. Players will play through a series of scenes with a highly engaging narrative gameplay and the rewards will be invested directly in the building meta. 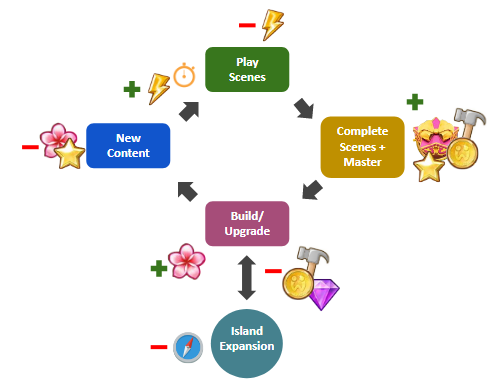 As you can see in the core loop, the players will have to spend energy to master levels and find clues to progress in the narration (strong reason to replay and master level). Each scene requires flowers to unlock which can be earned by upgrading or building the island. Finally a new chapter will be unlocked by collecting a certain number of stars (pay wall).

As you can see, each aspect of the gameplay is clearly dependent on another aspect and this is clearly communicated to the player in very few sessions of the game

Strong replayability! Game makes the player to reinforce the core loop of the game.

Each scene in the game will award players with clues and Stars upon completing it. Both Stars and Clues are the key factors that drive replayability of the game and the process of mastering a scene leads to player's retention with carefully crafted session lengths through energy economy.

Clues are the hints or milestones in the narration and revealing clues opens up new information on the story. So it is always fun replaying levels as it eventually unlocks new clues and gives player a sense of progression.

Players can also see at which star of the level a new clue will be revealed as they play the level, so it is easy for players to visually understand the effort involved. Usually clues will be placed in 2 and 4th star and reaching 5th star will lead to level MASTERY!

Stars are essentially required to unlock a new chapter in the game and this can be collected by completing or mastering levels. Each level can give you a maximum of 5 stars when the player masters it.

With each star player also receives a chest (reward), a positive feedback loop happens for each star acquisition.

The journey of mastering a level by the player is seriously rewarding and gratifying. It never feels tedious or monotonous replaying the same scene over and over in the process of acquiring remaining clues or even mastering the level. Instead the player takes this as a challenge and eventually gratified for the efforts. 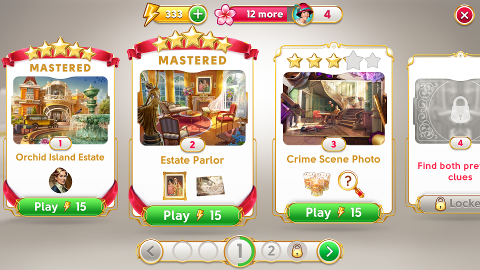 In the another dimension of June's Journey, players will build and upgrade the island to unlock new scenes. All the rewards are invested in the island either to build or upgrade. Players need to keep upgrading and build the island as it is the only option to progress in the game. Every new scene in a chapter requires a certain number of daffodils to make it playable.

Building or upgrading the island rewards players with daffodils which are essential to open new scenes in the game.

June’s Journey carefully combined building meta as a part of the core game loop. Players are forced to invest on constructions to proceed in the game for new content and this leads to session restrictions sometimes.

For instance, there were multiple sessions where the energy bar is filled and previous clues were found but due to lack of the daffodils, no new scenes were available to play and players need to pay to skip timer for the construction or wait it out to access the new scene.

June’s Journey got five currencies in the game and all of them are interlinked and equally important in the game.

As we all know Wooga is one of the studios who strongly believes in a good narration for player’s immersion into the game and it is very evident within June’s Journey. The game carefully paces the content by revealing periodic clues as the player completes or masters a scene. Interactive narratives at the end of each chapter adds a nice touch to sum up a chapter.

Different characters in the story arrive at the right moment and leave a good impact on the story.

Each scene in any chapter got a strong story line narrated through the clues and this gives a strong immersion towards the gameplay in that particular scene.

But I strongly believe there should have been some extent of narration even on the building meta.

Starbox is basically a reward that’s been granted for every star we reach in each scene. It contains coins, building items, diamonds and even character cards. Players can also buy these boxes directly from the in game store to progress faster and this is the key monetization for June’s Journey.

Wooga brought this chest system directly into the core loop and with this practice they showcased important to earn these chest. Eventually players understand the value of this purchasable item over time and I strongly believe a chunk of June's Journey revenue comes with these purchases.

Another smart thing about this chest is that these chests are player triggered, meaning the players can open these chests as per their request whether they won or purchased. For instance they were multiple times I earned extra energy as reward from the star chest and eventually I adapted the habit of opening the boxes only after I ran out of all energy during a session. So I can accumulate fresh energies and start over a new session and it was immensely helpful with level mastering mechanic. Both the star box and video ad integration aids Average session length of the player, which is the North Star metric of the game 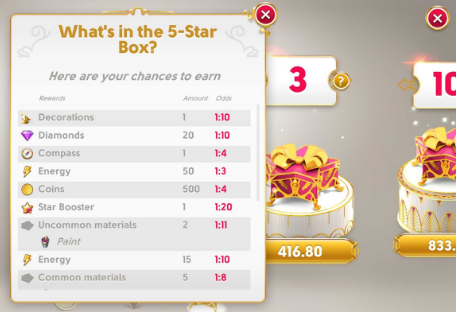 As you can see in the image, the list of items and odds of dropping rate.

Players will always buy a bigger star box as the odds clearly state the number of items it should be opened so at least buying a 10 box pack is a deal and a smart way to get diamonds.

One of the smart designs in the game is the way how the game adapted incentivize ad videos. Watching the ads will reduce the energy cost from 15 to 10  for each scene for 30 minutes. I would say this is very well executed for two reasons:

How can we run a profitable game for a very long time? “Live operations” and June’s Journey handles this extraordinarily well.

The game runs these revenue generating events mostly on building meta. For example the below example called ROMANTIC BRIDGE is a building event where the players can build the island with the provided decor items and earn the collectibles which is heart light and earn the daffodils with a grand prize “Romantic Bridge”.

This event is purely on the decoration and players are provided with new decors and now they have more investment on the island with buildings. 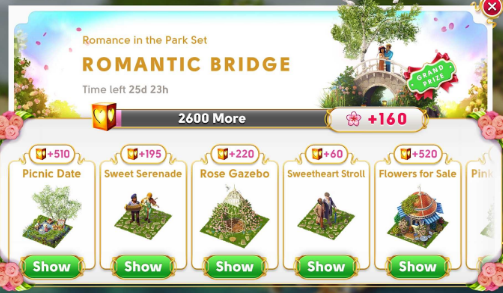 June’s Journey should provide live ops events on the HO scenes and reinforce the core loop. The game can run collection events where the players can collect a particular item by playing scenes in the game. 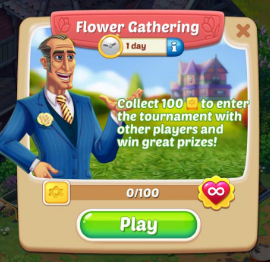 Like how Lily’s Garden does with the Flower gathering event. Players will collect the yellow blocks just by playing the regular levels and the event bar will be filled passively with these blocks. If the players lose the level and the game will discard all the items collected from that level. So here the players are triggered with loss aversion where they will lose the level, collected blocks or other winning streaks or may be another event task.

Character cards are acquired from star chests. When all the puzzle pieces of a character are collected the players can solve a tiny interactive puzzle to reveal the secret. A full bar of energy is rewarded for completing this puzzle and players can trigger this reward whenever they want.

Character collection is a deeper loop and an interesting mechanic in the game that players will face later. This is a really engaging collection meta as it reveals more plots and secrets about the world and characters. 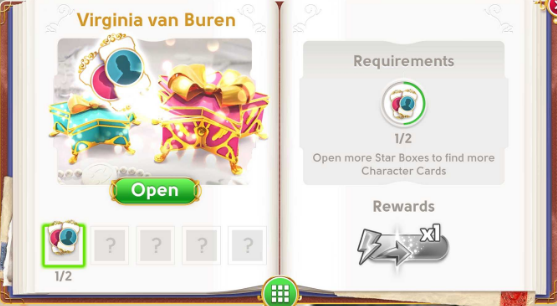